Jim was in his lowest weight range from the very late 1960s to early 70s, but it seems that particular weight loss and other times he lost a few pounds were because of flukes.

Calculating Jim’s weight for 26 years throughout his adult life, from the age of 21 to 47, he was never lower than overweight. He was in the overweight category for 8 years and various stages of obese for 18 years (stage 1, stage 2 and stage 3), so obesity was the large majority. 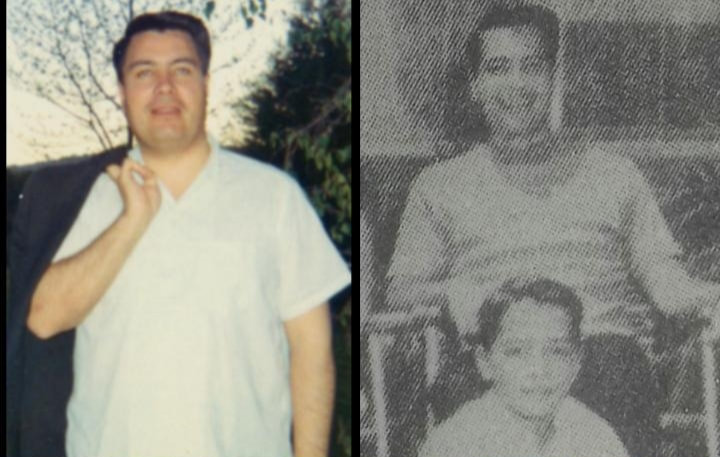 As he was obese through most of the 1950s and 1960s, it was unusual how he suddenly lost several pounds in 1968, after being so heavy since 1952. He is lighter in 1968 (right photo) compared with 1967 (left photo). Judging by events around that time, it seems the rapid weight loss occurred due to or after his hospitalisation for hypertension.

Other weight loss flukes include a fluctuation that had happened after a fasting protest in 1959, and in 1962 after a hospital stay in 1961 – both are included in his overweight category moments. Then he obviously became obese again, until the weight loss in 1968.
​
​If it wasn’t for those random moments prompting the weight loss, it is very doubtful he would have tried or been able to make it happen.

Jim stayed in the overweight category through 1969 and the early 70s, still fluctuating up and down. Then he gained back all of his previous weight, and more besides. He was in the obese categories again after the early 70s, a long time before his permanent move to Jonestown, but he did gain even more weight on top of that when he was living there, which is clear.

There are no known images of him when he briefly experienced swelling and bloating due to edema, so his size on all photos and footage has nothing to do with that condition. His weight and weight gain we see at any time of his life is obviously his fatness.

​In Jonestown’s last couple of weeks he lost several pounds, but again, that loss was prompted by illness. He was still very noticeably heavy after it. On the final day he clearly weighed a lot more than what is noted on his autopsy report after severe decomposition took place. The weight on the autopsy report is less than his lightest era, which makes it highly off the mark.

​As discussed on a previous post, writers Jeff Guinn and Julia Scheeres incorrectly stated that Jim was only fat when he was living in Jonestown. They focused on him at his fattest, while ignoring how fat he was all the time before as well. Without formally calculating his weight, it is always easy to see on all the photos and footage over the years that he was fat by any standards. It was not just a random occurrence during his final year and they should have seen this. It is a fact, not an opinion.
​
​Being gluttonous was a lifelong problem too. His gluttony – the overindulgence and excessive love of food, plus an addiction to it – did not only occur in Jonestown as they portray.
​
​Yes, of course he became fatter than he already was and reached his heaviest in Jonestown, but that doesn’t mean he suddenly wasn’t fat during the other eras! His lighter era mentioned earlier in the post was only brief compared with the rest of his life, and at his lightest he was still overweight with a prominent belly, so being significantly less fat did not mean he wasn’t fat at all. But he was in the obese categories for 70% of his adult life, which means there were a good amount of times before Jonestown when he was heading towards his highest weight.
​
Their error was repeated in a couple of other places, including true crime podcasts/videos, like Bailey Sarian. I don’t understand how anyone can jump on an inaccuracy like this and overlook his appearance. No deep research is required because it is something that is easily noticed. Anyone who sees him knows what he looks like, so there is no excuse for depicting it wrong in the first place. Just because something is said by a famous writer, it doesn’t mean it is automatically true. Without a doubt, their statements were blindly copied by people who hadn’t really looked for themselves to be able to make a correction. (I noticed that with other inaccuracies too.) Their error should not be repeated. It is important to get all of it right. His size is an undeniable and obvious part of him. Every fact matters. The footage and photos were never captured with distorting camera lenses or angles and were always natural and high quality, so appearances are shown accurately and true to life.

Every comment I’ve come across and person I’ve spoken to has rightly acknowledged or remarked on Jim’s weight all along, from beginning to end, so Jeff Guinn, Julia Scheeres (and anyone else who might have made similar statements to theirs) definitely should have acknowledged it in something more widespread like the books and documentaries. If they had mentioned his fatness all the time before Jonestown, then went on to say he gained a lot while living there and was at his heaviest, that would be recognising all the facts, but they haven’t said that.

Another post I made about his weight is longer with more details (go to info post part 4 to read it), but I want to update a couple of points here. In info post part 4, I listed his weight of 250 pounds as a BMI of 37, and his highest weight range of 265 as a BMI of 39.5. But I accidentally calculated those BMIs for a slightly taller height, so I wanted to amend them. For Jim’s height of 5′ 8″, the calculations for those weights would be higher BMIs of 37.8 and 40.1. Going on other comparisons I made recently, I would edit his highest weight of 265 for accuracy and say it was more likely 270 pounds, a BMI of 40.9.
​
​His weight loss at the end has been reported from 21 to 40 pounds. Dr. Carlton Goodlett was the person to estimate the weight loss as 40 pounds, which does appear likely. But according to audios recorded in those final two weeks, it seems as if Jim lost 30 to 31 pounds. However, his exact weight at the end (although clearly a lot higher than his autopsy weight) is unknown because between his heaviest weight and the final day, he could still sometimes fluctuate to a certain degree, even though he was still obese.