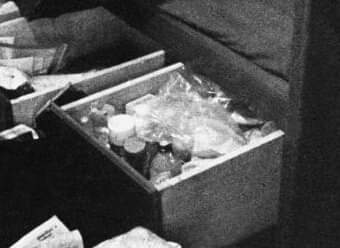 Jim had several illnesses and ailments over the years, but it is said he would sometimes fake or exaggerate his symptoms in the presence of certain people, for attention or sympathy. In the summer of 1953, he was hospitalised with infectious hepatitis. Although it cleared up rather quickly, it briefly caused anaemia for which he had b12 injections for a period of time. (He would still reference b12 in the 1970s as a cover-up for his drug use.) In 1954 he was diagnosed with high blood pressure and also diabetes around this time. Throughout the 1950s he would grind his teeth, break out in hives and start to have migraines due to stress. In 1961 he was hospitalised with bleeding ulcers and had an operation. At some point in the 1960s he was paranoid that moles on his neck were turning cancerous so he had them removed. In 1967 his blood pressure became so high that he went into shock and collapsed, for which he was hospitalised again. When he was a teacher in 1968, an ex-student reported his pancreatitis and bouts of fainting due to low blood sugar. By the early 1970s Jim was taking nitroglycerin for his heart. He had prostate problems, plus bladder infections. In 1974 he said he is bled every three months because his blood is dark and thick like syrup. He used an oxygen tank which would become more frequent as the 1970s progressed. The exact year he was diagnosed with rheumatoid arthiritis is unknown. His blood sugar and blood pressure plagued him throughout the decade as well. In January and March 1975 he spent time in hospital due to a bacterial infection and heart trouble. In January 1976 he was in hospital because he had blood clots and problems with his arthritis.

He moved to Jonestown permanently in June 1977. His illnesses seemed to worsen months towards the end: depression and anxiety, along with his high blood pressure and low blood sugar. He took antibiotics. Arthiritis would flare up. There were references to seizures. He had a very high fever which he tried to alleviate with cold water and sleeping on ice packs, along with trouble urinating for which he had to be catheterised for a certain amount of time. Glucose tablets, indigestion remedies and laxatives were found among his medication and other drugs. His heavy drug dependancy was also part of his ill health; at times he slurred his words or found it hard to walk steadily. There were references to a tumour on his pancreas, and suffering a heart attack and stroke. Other symptoms involving his lungs turned Jim’s paranoia into thoughts that he most likely had cancer again, this time terminal. Dr. Goodlett, a doctor he had seen about his diabetes since 1971 and the regular temple doctor until 1976, paid him a visit in Jonestown. It was August 1978 when his health was becoming its worst and Annie Moore became his full time nurse. Goodlett believed Jim’s lung problem was a fungal infection. Despite Jim’s many complaints, there are plenty of photos and footage of him interacting and looking enthusiastic, along with the countless audios, so his symptoms were being managed until the end. Goodlett was sure that if the massacre had not taken place in November, Jim would have died from natural causes within the month.