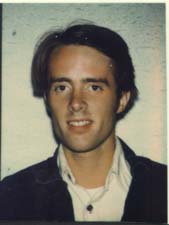 Brian Bouquet and I went to high school together and we both lived in Burlingame. He was a wonderful young man who once protected me against a gang attack that was aimed either cause me serious injury or kill me.

We were having a beach party when a gang of tough Hispanics came down to the fire looking for me. As they came to the fire, they had guns, knives and pointed boots. As this one guy approached me lifting his foot to kick me, Brian leaped from a sitting position and blocked his kick and, with multiple punches, Brian blooded his face, and he surrendered. With that all of us faced off from my school ready to fight, but a girl called peace and all my friends told these gangbangers that if they were going to fight me, they would have to fight all of them.

Why were they so angry with me? They were drug dealers and I would not allow them to come into our dances either stoned or to sell drugs. Thank you Brian for saving my life or keeping my face intact.

Brian and I also co-wrote an article for the high school newspaper about Brian being put in a youth prison for a minor offense and he talked about his horrible experience and abuse by the guards. The article was published and created a big stir including calls for us to be suspended from high school.

After high school Brian got into playing the sax late at night in punk meets John Coltrane style. It was pretty amazing stuff because he did it in this large hallway stairs that created great echo.

When Brian asked me to a Peoples Temple meeting in San Francisco, I declined since I lived six hours away and attending UCSB. He joined Jonestown because he wanted greater social justice and to fight against racism. He later married a 22 year old black woman. He had a wonderful sister, Jeannie Bouquet but I have lost contact with her. I often think of her and hope she is OK.

Rest in peace Brian! He was a good friend and brother. And thanks for protecting me on the beach.