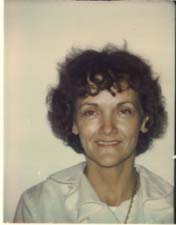 My mother was one of the most giving, loving, selfless people I have ever met, and I grieve daily, even now. She always had a Brownies, Girl Scout, Cub Scout or some benevolent group going on, even if one of our family didn’t have a child enrolled. She was constantly bringing home lost or hurt pets, from the usual cats and dogs to stray abandoned birds or anything a neighbor could no longer keep. She was always the first to volunteer for the school/church/little league bake sale, bottle/newspaper drive, often staying up late into the night watching Jack Paar or Loretta Young to make sure everything came off just so. I was the only one allowed to stay up with her and I know, much of the kindness, humanity and compassion I do possess, is a direct result of the late night sessions.

Of the five children, I was the right age to be taken to any and every Revival Meeting, from “faith healers” to churches trying to build an orphanage either here, or in a country I had never heard of. I can’t remember a month that went by without my mother cheerfully sending off $10 or $20 to an impoverished child pictured shoeless in a grass hut.

She really loved missionaries. Both her parents were Methodist missionaries to Japan before and after WWII, and her eyes would light up when relating tales of her families time in Japan.

She had an older brother Paul and younger siblings Mary Lou and Sam (my favorite). One summer he stayed with us and drove an ice cream truck all summer… If there’s anything closer to feeling like a KING more than riding shotgun through your neighborhood in a GOOD Humor truck listening to the Giants on a transistor radio, I haven’t found it. I do fondly remember meeting many of the “Big Name” evangelists, Oral Roberts, A.A Allen, WW Grant (?). Being a child, I was usually called up for the “laying of hands.” It wasn’t until years later at a music festival, when Jim Morrison of the band The Doors patted me on the head and tousled my hair when I realized it was the same power/charisma/hope for a secret that others didn’t know, that I realized why my mom was on her perpetual search for “The Answer”.

By the time I actually met Jim Jones, I was polite and hopeful but knew he was not the Divine One, he was just the Next one in a long line of prophets/poets and shamans that promised a new world to a hopeful people, but were only really fit to sell monkeys or dreams door to door.

It saddens me tremendously each time I hear, “Well, you sure drank the kool aid,” and my mom is treated as a deranged kook. She was a beautiful person who wanted to be among those who dreamed of a better world, but also make sure to do her part to make it happen. I miss you, Mom, and I hope you got to where you longed to be.