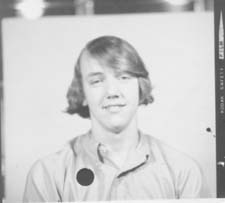 Wesley was born on 15 Sept 1959, making me 7 years older than him, perfect for dominating, playing practical jokes on, and overall just the right age for being a big brother with all the fabulous perks that come with that. Getting him up and ready for school on Saturday, cutting the string on his yo-yo just before the finals, convincing him he burned the house down. We were close, he looked a lot like me, was really athletic, was quite handsome, as hinted at before. I introduced him to pinball at the bowling alley…all the good influences parents expect.

I graduated when I was 17, so he was just ten and we kinda lost track of each other. That is up until the last year before they all departed. Wesley and Melanie would take twice monthly trips from Ukiah to Napa, where I had a record store, though I’m sure he just wanted to visit (which was strictly forbidden by JJ (DY-NO-MITE). Each time he left, he made sure to have 20 or so of the latest 8 tracks (remember those?).

We talked about the future. He jokingly – I think – said he wanted to be a pimp.

He casually mentioned moving to Guyana as a possibility and seemed enthralled with the James Bond East meets West scenario, though I’d heard so many bizarre plans before, I didn’t know what to believe.

Then, one day I read the New West Magazine article and thought “This is bad.” Way worse than I’d thought up till then. And, in what seemed like a mere instant later, anchorman Judd Hambrick was reading the list of confirmed dead. The dream was over. My mom, brother and sister were all gone. And there is no one to pay.