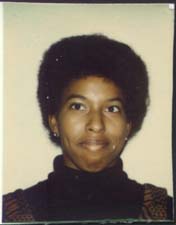 I met Anita Ijames on my first visits to Peoples Temple in Redwood Valley, California in March 1970. She was welcoming and gracious. She was always matter-of-fact, and hardworking. And, she always made time to stop and greet everyone as she went about her work. She was younger than I was but was part of the core of the Peoples Temple family.

Later, I found out that she was part of the group of members who had traveled from Indiana with Jim Jones and about 100 others, in the late 1960s. Her father, Archie Ijames, was an Assistant Minister who, together with his wife Rosie, had brought the four kids in the family – Norman, Vicki, Debbie and Anita – all of them so talented and inclusive.

The quality I liked best about Anita was her openness and frankness. She didn’t spend time on fluff, almost as if she knew none of us had time for that in those days. She also had an awesome voice and sang a solo with our choir. She was never one to use the position of her father or her family’s “position” ever, or the obvious musical talent she shared, to be seen differently. I would consider her one of the worker bees in her parents’ care home and around the Temple who wanted the world to be a better place.

I spent time with her in Redwood Valley, and then we lost touch a bit as she moved into the Bay Area. After I moved to Jonestown in 1977, she came shortly after. In Guyana, she worked hard, sang often, and was in the same singing group I joined – “The Misfits.” We practiced so that we might be a traveling Peoples Temple music group or Talent Show.

In late October, I was sent to work as a procurer in Georgetown, and Anita was there doing the same job for a while. Her husband, Mike Kelley, was in Jonestown. I remember her as developing great friendships with the Guyanese people we met. She was never one to complain about anything, or whine. She was positive always.

I can remember when her shoes fell apart in Georgetown, and we had to wait a ridiculously long time for Jim’s personal approval of the expense of buying her a new pair of shoes. Even under those unusual and ridiculous circumstances, Anita was never one to complain. She just kept pace, and waited it out. She had her mind set on a better, fairer world, and just pushed forward. Anita was a kind and wonderful person who always carried her weight and more.

She went back into Jonestown just before the deaths on November 18. It could have been just as easily been me going back. She was a wonderful, dear, sweet person, and I miss her.