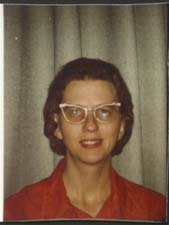 Carol Stahl was a genuinely sweet and calm member of Peoples Temple. She was always the matronly type, taking care of others. Her husband was an irascible man who often needed taming and consoling, and she took it all in stride.

Carol moved into the Redwood Valley Peoples Temple group from the Golden Rule community in Willits. That was in interesting peace-seeking rural community which did not function with members using money. I can remember at some point trying to teach decimals to some of the students who had moved in from that community, and the concept of pennies, dimes, etc. was a difficult subject for them.

Carol was a teacher while in Peoples Temple, and was happiest after her beautiful daughter was born. She was such a proud and attentive parent. Her defense against chaos that was part of Peoples Temple, especially after the center moved from Redwood Valley to San Francisco, was to walk calmly and slowly. She would not be rushed. She would take care of business in an orderly way, calmly.

Carol worked hard, never really asking for anything for herself. She was kind to each person she spoke with, never said a cruel word, and was always loving. She was generous and unselfish, and dedicated. She wanted a better life for her daughter and for the Peoples Temple family, and for the greater world around us.