They whip dreams of madness out of their own nightmares.
– Jim Jones
Words fail.
– from an anonymous letter found at Jonestown

Last November’s 30th anniversary of the Jonestown tragedy might have seemed to some a 1970s cult relic, a nightmare from some distant untethered time. But the story of Jonestown is really about contemporary America. It’s about the unexamined life, the one we are living now – the one that we have always tended to live. Something twitches in us from time to time. Some little used muscle grabs, makes us look, despite ourselves: every few years, we have a collective need to gaze at and then shove away the images from Jonestown, Guyana. 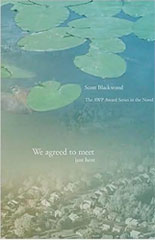 I’m someone who can’t stop looking. My novel, We Agreed to Meet Just Here, which came out earlier this year, has Jonestown at its center. I began the novel ten years ago when I stumbled on the obituary of Sir Lionel Luckhoo, Jones’s former attorney, in a Ft. Worth, Texas newspaper. Luckhoo was larger than life: known as the “Perry Mason of the Caribbean,” he’d won 250 cases without a loss; he had been knighted by the Queen of England; he was an amateur magician who loved entertaining kids. (Adding to his strange resume: he was also the inspiration for Lionel Hutz, the attorney on The Simpsons TV show. Hutz is Luckhoo’s opposite in the legal field, with 250 court losses, no wins.)

Luckhoo’s obituary, which ran most of the page, said he had also represented Jim Jones in several child custody cases and narrowly averted the Jonestown massacre when he was mysteriously “prevented” from taking a planned trip to Jonestown that day. He was, in the words of the obituary, “changed” after this experience (it had the ring of a line from a Chekhov story: “And then everything was different”). Wealthy, esteemed, Luckhoo moved to the United States in the 1980s to be near an adult child and to begin a new career as a traveling evangelist (picture here, if you will, the knighted Luckhoo behind the wheel of a Chevy van, still performing the occasional sleight of hand). He was a witness to the power and mercy of God, he said. He felt singularly called. Why else, he reasoned, had he been spared? And so in my novel, Sir Lionel Luckhoo – too improbable even for fiction – became the fictional Odie Dodd, an aging Guyanese physician and amateur magician (didn’t let that detail get away) who is called on to vaccinate the Jonestown children and narrowly escapes his fate because his car breaks down on the way and he arrives late. But try as he might, 20 years later, Dodd can’t make this event – all its afterimages – disappear from his head. So he decides that he must confront Jones, or at least his conjured memory of him.

Words fail. These words appeared in a letter found at Jonestown.

And they do, of course.

In one memorable photo taken soon after the mass suicide, a black man and woman lie on the ground together on their stomachs; between them, clasped in their mutual embrace, is a little boy. His toddler legs jut from a pair of blue shorts. On his feet, gleaming white tennis shoes. It seems inconceivable. These loving parents putting a cyanide-laced grape punch to their little boy’s lips. A child they would have laid down their lives for. Yet here is the photo. The iconic American family, in love with its own annihilation. The media reports about Jonestown often feature the large sign that hung over the stage (“Those who do not remember the past are condemned to repeat it”) where Jim Jones sat those last hours, exhorting these parents and hundreds others to kill their children, because he knew the rest would be easy – after that, who would want to hang around?

Unlike more iconic American stories, including September 11th, Jonestown is a story with seemingly less humanity on its surface. It’s difficult to point to redemptive moments, to say here was when our dignity rose, here was when our courage won out. There is no let’s roll, no rushing of the cockpit door. The plane simply goes down. But that’s what seems to draw us to Jonestown again and again – its unmet humanity.

Tim Reiterman’s definitive 1983 book on Jonestown, Raven: The Untold Story of the Rev. Jim Jones and His People, which was reissued in paperback for the 30th anniversary, makes the case that though we may remember the past we shouldn’t confuse this with understanding it. We’ve projected so many of our desires and fears into the Jonestown story that its true lessons elude us most of the time. The ambivalent feelings it leaves us with – after all, over 400 of the dead, all American citizens, were initially refused burial by cemeteries across America – are tied to our ambivalent view of our selves.

We want to see Temple members as something separate because they are very much us, though seen through the glass, darkly. They had stopped telling their own stories and had become characters in Jones’ story. In Reiterman’s scalding analysis, this point is implicitly laid bare again and again: Jones’ vision for Peoples Temple was modeled, not on some alien new-age spiritualism or radical offshoot of Islam, but on familiar bedrock Christian fundamentalism (complete with speaking in tongues and fake healings, sleights of hand more dependent on the audience’s desires than the magician/ huckster’s talents). The Temple’s social justice was founded on the volatile promise in the Declaration of Independence, that all men are created equal.

It was the belief in freedom – of conscience, speech, and act – which pivots off this promise that sent Jones and his people into the jungle. And once there, their dream – their story – went mad because Jones went mad. In the end, drug-addled and convinced he was dying, Jones transformed this idea of freedom into a dream of submission and self-annihilation that leads us back to the photo of the family in their final embrace. Jones, like a shabby Ahab on the quarterdeck, staring out at that dead sea of devotion. This is a truth that crouches in the dark corner of the American story – the story of the American berserk – that novelist Phillip Roth has written about prophetically in American Pastoral. It makes us terribly uneasy, Jonestown. It speaks to the potential in all of us, hidden even in our creed, to give over our stories at our weakest moments, in the name of freedom.

And though most of our words afterward fail to capture this experience fully, we keep trying, because our words are, finally, the most fully human response we have.

(Scott Blackwood can be reached at blackwood.scott@gmail.com. His website is here.)