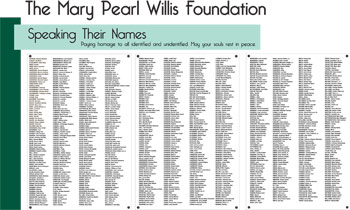 On November 18, 2008, I awoke from a good night’s sleep, feeling great! Fantastic! Joyous! I had had no nightmares about my Aunt Pearl. I didn’t spend the evening avoiding/glued to news specials showing bloated decaying bodies, looking again – as I had in previous years – for any trace of her lying in the field, for any footage showing the lively crowd hours before the massacre. I had no feelings of dread.

This is because two nights before, I sat in a room filled with Temple survivors and family members who gathered to take part in an incredible healing and to view three panels listing the names of everyone who died in Jonestown, all 918 of them.

The evening was more than I envisioned. It was an intimate private setting, reminiscent of months earlier, when I placed Aunt Pearl’s headstone onto her previously-unmarked grave in Monroe, Louisiana. The ceremony in San Francisco – once the headquarters of Peoples Temple – concluded two months of heavy lobbying of city council members, county supervisors, mayors, and U.S. Senators and Representatives, followed by finding a location for the memorial. My mind swirled with ideas about how to stay focused on the task, not on such questions as whose name should be on the memorial and whose should not. The latter always received the same response: “God will make the decision.”

God’s decision is greater than mine. I prayed, setting aside personal feelings and allowing Him to intercede, eventually opening my mind and heart for the ultimate forgiveness. The decision would anger, confuse and spark debate, prompting the loss of potential friends and rebuffing of acquaintances and family. I believe He will heal those wounds. It was He who opened my eyes to see everyone was a victim, from the shooters at Port Kaituma to the armed guards surrounding the pavilion, from those who injected my aunt to others who didn’t embrace the idea of suicide. Clearing my heart and soul makes it possible for me to heal and, most importantly, to forgive. My goals have been accomplished – Aunt Pearl is able to rest in peace – but in doing so, I had to be me, doing what was best for me to heal. The joy in helping families see the recognition fitting of dignitaries for our loved ones, who have been mocked, ignored and dismissed, makes me happy.

My journey began as an effort to learn about my aunt’s life in Peoples Temple. It inadvertently created a path to allow me to escape my hidden horror, to find a voice to speak up for myself and others who feel helpless, to ensure changes for the betterment of humans in life and death, and to cultivate relationships with political figures and persuade them to open their eyes to problems within communities they service.

Two years ago, I established a website containing information about Peoples Temple, a group I had despised! And in 2008 I sat in a room honoring my aunt and her fellow victims in Jonestown.

November 18th will always be a painful day, but now there is a different feeling, one which brings smiles and memories of an evening of love, for it was in 2008, thirty years after the horror, that good vibrations filled the air with the unveiling of the memorial.

San Francisco was just the beginning. My goal is to have a memorial in every state. It’s a big task – yes! – but I know God will make a way.

(Lela Howard is a frequent contributor to the jonestown report. Her previous writings appear here. She  can be reached at lelavhoward@gmail.com.)