In recent years, a number of photographs from Jonestown have come up for sale on eBay. Recognizing their historical value, I have successfully bid on a number of them.

The photographs include several pictures of Grace Stoen and her son, John Victor Stoen. The custody lawsuit over John Victor united Grace and her estranged husband, Timothy Stoen, against Jim Jones, who refused to surrender the child from his sanctuary in Jonestown. The battle, which hinged on conflicting claims over John Victor’s paternity, was a catalyst for Leo Ryan’s visit to Jonestown and the events of November 18, 1978. We will never learn the answer to that question from the evidence at Jonestown because John Victor was one of the many children whose body was never positively identified. All we know is that he died in Jones’ cabin along with Maria Katsaris, who has been described as his surrogate mother; Kimo Prokes, who was indisputably Jones’ son; and members of the Jonestown leadership.

I won a number of photographs at a bargain price, but some were not as nice as others. They had aged and yellowed, but still they were worth the effort, and I didn’t have to fight anybody else for them. 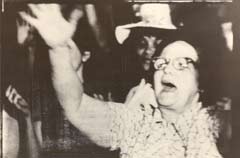 In one photograph (CA224-A) is a middle-aged Caucasian woman. The picture was taken by San Francisco Examiner photographer Greg Robinson who was shot and killed at the Port Kaituma airstrip along with Congressman Leo Ryan. As I look at the photograph of the woman, I wonder who she was. The woman appeared hopeful and in a celebratory mood; was she acting or was she really happy in Jonestown? 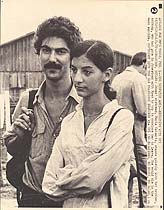 A photograph (CA223-A) of Maria Katsaris and her brother, Anthony Katsaris, was taken only hours before he was wounded at the airstrip and she died in Jonestown. He had pleaded with her to return home with him, but she said she had no desire to leave. One reason I believe she stayed was that she couldn’t leave John Victor behind.

Of course, the most expensive photograph (CC1138-A)  is the unforgettable image of Jones’ empty chair below the pavilion sign with the George Santayana quote: “Those Who Do Not Remember the Past Are Condemned to Repeat It.” It is also true about Jonestown: we must never forget the events that occurred in that community, at the airstrip, and at the Temple headquarters in Lamaha Gardens in Georgetown. The empty chair not only represents Jones’ role in the community that bore his name, but also the deaths of nine hundred at his command.

The photograph (CC1150-A) which appears here, shows Michelle Wagner – Leslie Wagner-Wilson’s sister – Diane McKnight, and some children. Contradicting what some have said about Jonestown, the women do not look like robots or zombies at the command of a madman, but rather they appear content and satisfied with their lives. The children appear well-fed and cared for in a communal atmosphere.

One of the saddest photographs is (CC1146-A), which is of the last remnants of Jonestown after an auction in Georgetown, Guyana. I am dismayed and surprised by the lack of respect towards the deceased and the community of Jonestown. The on-lookers appeared uninterested or ignorant of the items’ value as part of a historic event. I also get mad when I realize that Guyana had pretty much forsaken Peoples Temple and Jonestown itself.

Photograph (CC1143A) The crates show the name of Peoples Temple Agricultural Project on a truck.

Photograph (CA222A) Unidentified victims of Jonestown includes a couple with a child.

Photograph (CA221A) The film crew before they videotaped Jim Jones on November 18, 1978.

Photograph (CA220A) Weapons retrieved after the Jonestown massacre on November 18, 1978.