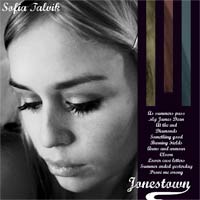 (Sofia Talvik is a Swedish singer/songwriter whose latest CD, Jonestown, features a song of the same name. Her website at http://www.sofiatalvik.com/ opens with the audio of the track. Ms. Talvik recently answered questions about her music and interest in Jonestown in an interview with the jonestown report.

Sofia Talvik performs her song “Jonestown” in a YouTube video available here. The lyrics to the song appear here.)

Where and how did you first hear about Jonestown?

I hadn’t heard about Jonestown until a few years ago when I happened to see a documentary on TV about it. It told the whole tale about Jim Jones from his early years, to the disaster of Jonestown. I was very moved by it. I had my guitar nearby and started writing the song while I was watching it.

Did you just write the song from your heart, as a spontaneous work, or did it come out of some of your own study?

I read more about Jonestown after I saw the documentary and realized it occurred just a few days before I was born. It felt weird to think that my family was here, all safe and sound in Sweden, and horrible things like that can happen somewhere else at the very same time.

When I saw the documentary I was very moved by a man who had witnessed his wife and newborn child die there. He was talking about how he held them in his arms while they died.

But I just wrote it from my heart. The song itself is not just about Jonestown, Peoples Temple, or the event as such. The song is more about taking responsibility for your own actions and not putting your life in someone else’s hands just because you’re too afraid to take charge of it yourself.

What did you learn – either about the people of Jonestown or about yourself – as you were writing this song?

I don’t think you really can learn things from something you yourself create in this way. But I hope that people that listen to it see the truth in that you yourself – not God or anyone else – are responsible for your own life and actions.

The song is the title track of your new CD. Is this because the song has influenced the other music on the CD, or because you feel it’s the strongest and most passionate piece?

I named my album Jonestown, because it’s my favorite song on there, but also because it invites discussion and makes people curious.

Who is your audience in general? Are these the people you wanted to address in your song, or were you trying to reach out to attract more people?

I have a very wide audience, from teenagers to middle aged people. I don’t think I could pin down exactly what makes someone attracted to my music. I try to write songs that mean something, and the lyrics are very important to me. With my song “Jonestown,” I’m addressing everyone who listens, but as I’m not a Christian myself, maybe the song is more of a critique to people that take their beliefs too far and tend to turn to a God, or a pastor instead of looking into themselves to see what is right or wrong.

What has been the response to your interpretation of Jonestown? Do you find that your music has raised interest in others?

Basically all the reviews I’ve got of the album tells the story about Jonestown, so there are probably people who didn’t know about Jonestown and learned more about it after listening to my album or reading about it.

Are there lessons for us – you, your audience, the world – in 2009 that bridge the 31 years since the tragedy?

No matter how charismatic, no man is sent from God or can tell you what God wants you to do. You have to decide for yourself how to live your life. Don’t let anyone else do that for you.

Do you think we have learned them?

Well, I hope so. I believe in making my own happiness.

One recurring lyric from the song is “Jonestown, USA.” Do you think Jonestown was a distinctly American phenomenon, or could it happen again in another country in another set of circumstances?

I think it could probably happen anywhere in the world. Maybe not in the exact same way, but in the sense of a cult going haywire, for sure. There’s the Ashrams in India that people leave their families to join, and there have been similar cults in Europe. If people are insecure, they tend to be drawn to a group where they can feel a connection, and if there is a leader that claims to be superior to them it can be hard to stand up to that. Even if you want to leave, you may not dare to try. The place that seemed like your home can suddenly become your prison. Or as I sing in Jonestown “what could be your temple, could also be your downfall.”