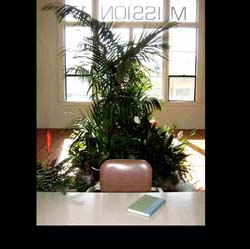 The persistent relevance of Peoples Temple: that’s what I’ve learned from the research I’ve done on the organization. I find it interesting to reflect on the impetus for Peoples Temple’s creation as I, and many of my friends, seem hard-pressed to find affordable housing, a living wage, or healthcare. I have found myself pining for something to change in this supposedly great city. Peoples Temple was organized to serve people like me. This is what I’ve tried to impress upon people, and why I chose the symbol of a garden as the entry point to my thesis and gallery exhibition, Jonestown Had a Garden.

It was the idea of a garden that allowed me access to Jonestown’s and as such I knew that plants needed to be a part of the installation. I felt that the inclusion of palms, orchids, bromeliads, and peace lilies would soften the space and allow visitors to enter into the exhibition. Present in the gallery is a desk on which lie copies of the Black Panther Party articles concerning the assassinations of members as well as reports from Jonestown and its aftermath within the Bay Area community, the 1977 Peoples Temple Progress Report which described the intended layout of the community and its successes in food production, as well as a copy of my thesis. The desk symbolizes scholarship and guests are encouraged to sit and read. Across from the desk is a chart I created which outlines the historical trajectory of Peoples Temple members as seen from the context of slavery. 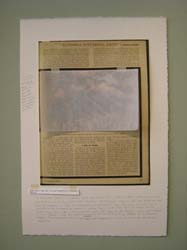 On opposite walls of the gallery were images of key points of my timeline of the circumstances of African American life after slavery which would lay a foundation both economically, politically, and culturally for an integrated, socialist church. Along with these images are portions of my text which explain the relevance of the images in order to make it clear for the viewer how I see these events lining up. Also included are several images which appeared in the December 4, 1978 issue of Newsweek, now infamous for their shameless depiction of the dead at Jonestown. The images are used sparingly and were covered with vellum, which seemed to affect the viewer by making him or her question whether to lift the translucent sheet and look at the picture. These images were accompanied by my critique of the reporters and photographers for their dehumanization of the dead, their profoundly disrespectful language and tone. It is my belief that the mainstream coverage of the Jonestown deaths belittled the intentions of the members of Peoples Temple for the sake of sensationalizing a horrific event.

My comments on the imagery are written by hand in pencil to give the impression that these are my ideas and my words, and that they are open to changes of opinion. They are not intended to appear finished, or definitive. I want my work to generate conversations, to get people thinking of Jonestown in a different context. In conjunction with the show, I also held a lecture in the space with Leigh Raiford of Berkeley’s African American Studies Department. Raiford is a scholar of African American depictions in the media and the small gathering produced a satisfying conversation around Peoples Temple which was sensitive and compassionate.

I would like to say this to the survivors of Peoples Temple: I am sorry that the members of Peoples Temple have been treated like objects to be ogled at and reviled. I am sorry your history has been largely extinguished by media depiction of you as simple-minded followers of a mad man. I am grateful for you for trying to change what you felt to be an unjust society. It is this lesson which I hope to impart: we need more people like you willing to unite for social justice in America.

(Karin Smith can be reached at kalanasmith@gmail.com. A summary of her thesis, “A Taxonomy of Jonestown,” is here.)