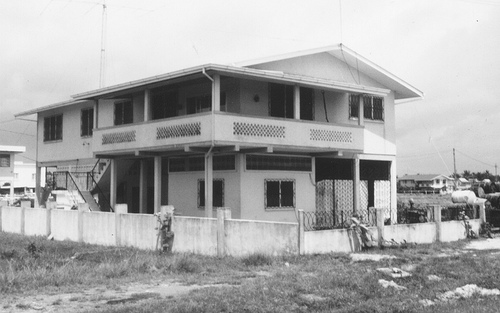 Lamaha Gardens is the name of a neighborhood in Georgetown, Guyana. It was also the name of the street where Peoples Temple maintained its headquarters – the address was 41 Lamaha Gardens – and eventually, the name “Lamaha Gardens” became interchangeable with “Georgetown” when people from Jonestown spoke of their visits to Guyana’s capital city.

There were two sets of people who lived there. There was an administrative staff, headed by Paula Adams and including Sharon Amos, Teri Buford, Helen Swinney and others. They were considered to be only semi-permanent residents of Georgetown, although they made few trips to Jonestown itself.

Other Temple members rotated in and out of Georgetown as staff, with most people staying no longer than three to four months. This staff included people who made arrangements for purchasing and shipping food and supplies to Jonestown, working with Guyana government officials, including customs officials, and raising money from Guyanese citizens. Most of these workers didn’t want to stay longer than those shorter periods, according to several survivors, in part because their families were back in Jonestown.

The second set of people were Jonestown residents who traveled to Georgetown – and stayed in Lamaha Gardens while they were there – because they had doctor and dentist appointments, were participating in cultural events or (as was the case in November 1978) were playing in a basketball tournament.

It should be noted that, as a general rule, partners and families did not live in Georgetown, in large part to discourage defections: people were less likely to leave if their relatives were still in Jonestown, especially if their departure had the potential to result in consequences for people left behind. There were periodic exceptions to this, as it was on November 18, when the three children of Sharon Amos were all with their mother. All died in the Lamaha Gardens bathroom.

As for living conditions, according to one survivor, “There’s no question that the living accommodations in Lamaha Gardens were infinitely more comfortable than those in Jonestown. On the other hand, there were no days off in Georgetown. Those who ‘lived’ there put in longer hours than the folks in Jonestown, and the consequences for not doing the job had far more severe repercussions. If you messed up in a meeting with a government minister, it affected everybody, not just yourself.”

In large part because of the number of basketball players, the house was especially full on November 18, with about 45 people in the house that day. All survived, except for Sharon and her children.