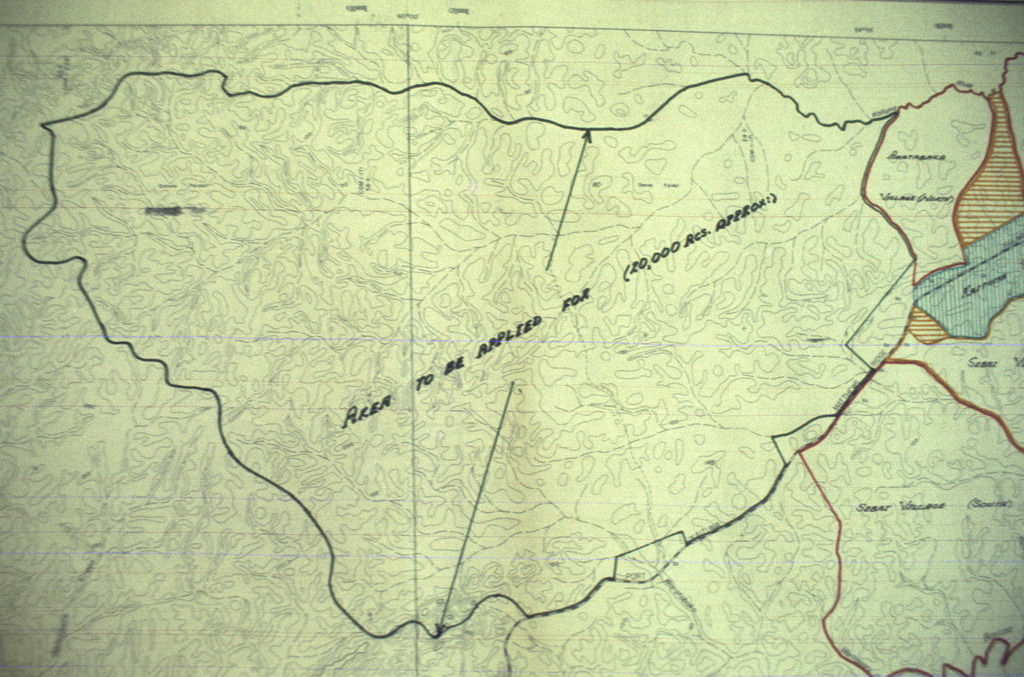 Three maps – in actuality, likely a single map with three separate reproductions of it – depict an early proposed leasehold for the new Peoples Temple community in the Northwest District of Guyana, a community that would become known as Jonestown.

According to Don Beck, a Temple member who accompanied the original party to Guyana in December 1973, the government of Prime Minister Forbes Burnham initially proposed a leasehold for 20,000 acres. (The text of a report by the Guyana Government written four months after the deaths suggested the amount might have been 25,000 acres, although the maps on this page do not bear that out.) Temple leaders accepted the idea, and a handful of members – Eugene Chaikin and Archie Ijames among them – stayed in Georgetown to work out the details. They were soon joined by Paula Adams, who remained in Guyana for the balance of Jonestown’s existence.

Early negotiations focused on such issues as where the central residence area would be, and where the road would run from the community to connect with the existing thoroughfare between Port Kaituma and Matthews Ridge.

Even before the size of the area to be cultivated was agreed to, a group of four Jonestown “pioneers” – Anthony Simon, Greg Frost, Lester Mathis, Tim Swinney – went down in spring 1974 to undertake the initial tasks of development, beginning with such basic decisions as buying a boat in Miami. On 26 March 1975, the Guyana Ministry of Agriculture approved the lease for 3852 acres of land – 3000 acres of which would be cultivated – within the larger block, although the lease itself was not signed until 25 February 1976.

Map 1 depicts the 20,000-acre proposal in its largest context. The Port Kaituma area is in the upper right quadrant, and the leasehold extends west from it. The dotted line dropping south and west is the road and railroad running in tandem between Port Kaituma and Matthews Ridge. An aerial photograph showing the same area is here.

Map 2 isolates the proposed 20,000-acre leasehold. The acreage which the lease stipulated to be cultivated most likely covered the land in the lower right portion of this map, in the area depicted by the few changes in topography. (This map has been translated into both French and Spanish versions. The editors of this site thank Renato Urbano for these contributions.)

Map 3 is an inset which shows Port Kaituma and neighboring land holdings, including the eastern portion of the proposed leasehold.

All maps are copyrighted by the California Historical Society and are published with permission.