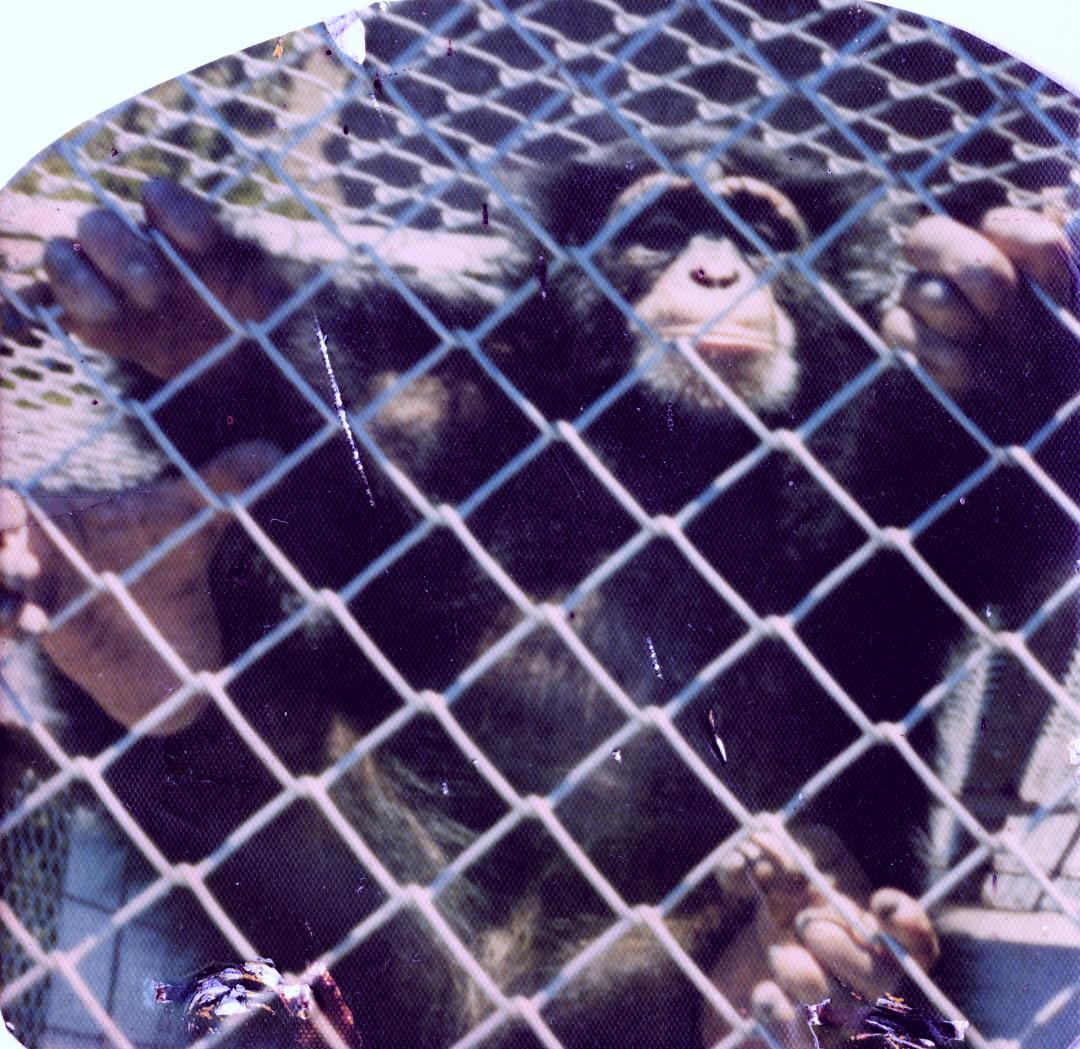 Mr. Muggs was a chimpanzee who was picked up from a pet store by Jim Jones and his family on the way back from Los Angeles on a trip in 1971 or 1972, when Stephan Jones was 11 or 12 years old. Despite the rumors to the contrary, Mr. Muggs was not rescued from an animal testing lab or from a vivisectionist. He was named after J. Fred Muggs, a chimpanzee, who – as did his namesake with the Temple – acted as the mascot on NBC’s Today Show from 1953 to 1957.

Mr. Muggs had a diaper on when Jim brought him to the car, but it didn’t stay on very long. He fouled the interior on numerous occasions on the way back to Redwood Valley, and, as Stephan described it, “laid waste” to a number of rest areas en route.

The chimp lived in Redwood Valley for a couple of years. He started off living behind the parsonage in a cage that had a small building connected to it where he could go to stay warm. The cage served a second purpose as well: it was used for security with stairs to the top and a small building for 24-hour security duty. The shortwave radio antenna was also located on a pole attached to the cage.

Jim was not very humane with his new acquisition, often disciplining him quite physically, according to Stephan. Eventually, longtime Temple member Joyce Touchette adopted Muggs, and the chimpanzee became a fixture in the Touchette household. He also rode on the Temple bus periodically, always in the care of Joyce.

He could be a real handful, and seemed to take special delight in intimidating the Touchette family dog, but he also viewed Joyce as his mother, and respected – if not feared – her because of her maternal discipline. Even in Jonestown, no one could handle him except Joyce.

Muggs went to Guyana on one of the first chartered trips Temple members made in December 1974. His cage was also one of the first structures erected in Jonestown and was ready for him when he arrived.

Mr. Muggs developed into a solid chimpanzee, weighing upwards of 130 pounds. When he became excited or angry or anxious, he would flare out his hair and appear larger than life. He was a social being, and loved to play games like keep away and tug-of-war. Practically anyone could get him to play – and to get him worked up during play – but Mr. Muggs usually won the battle, in part because he was not afraid to use his teeth to nip his opponent.

Mr. Muggs could also use his feet as hands, and was adept at pulling blankets through the bars into his cage. He would also reach through the bars and dangle a blanket as an invitation for a game of tug-of-war. Oftentimes young boys in Jonestown would start to play with him, but even with three or four boys at the other end of the blanket, Mr. Muggs would always win, especially when he used his legs to brace against the inside of his cage and suddenly rear back. When Stephan or his friends saw Mr. Muggs get into that position, they would run towards the cage to save the boys from being jerked off their feet.

Along with several dogs, Mr. Muggs was one of the animals that were shot in Jonestown on November 18, although who fired the shots is not known. According to Guyana Assistant Police Commissioner Skip Roberts, Mr. Muggs was shot three times, but was still alive when the Guyana Defense Force arrived in Jonestown 36 hours later. He died soon afterwards.