(Jolene McDonald is an admin of the Facebook group Jim Jones Cult Leader created in February 2018, and the creator of a blog – the Jim Jones Information Blog – to share some of the informative posts from the group. The posts from the blog also appear here. Her collected works on this site are here. She may be reached at immaculatesleep@gmail.com.) 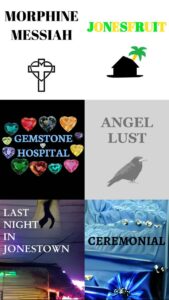 Between February 2020 and May 2022, I published four poetry books and two digital art books inspired by Jim Jones. Each book dealt with a variety of subjects in Jim’s life, with some spirituality coming through each book, and at times, graphic themes of death and its aftermath.

Morphine Messiah was the first poetry book or “hymn book” as I called it, followed by Jonesfruit, Gemstone Hospital and Angel Lust. Last Night in Jonestown was the first to include digitally created pictures, a tribute to 18th November 1978. Finally there was Ceremonial, a book of images to represent the funeral Jim never had.

I felt inspired to write and create those books in the moment, but then I realised I had to put other priorities first and ultimately decided to withdraw them all from sale and distribution. There are no additional volumes planned.

This was the best way for me to make room for bigger, long-term projects. Publishing and promoting was time-consuming and a distraction from everything else I’m doing, especially my extensive online work that has to be completed. This article is a closure for the books, and gives details for anyone who was interested in them or potential follow-ups.

Although I’m not selling copies now, I did start an audio series to dissect the poems and meanings in their entirety. It’s the only way to access the content and works as another kind of closure, to open up about anything I included in the poems back then that I may omit if I published the same books today.

With private journals filled with more poems, several volumes are left unwritten. It’s possible that some of them could be brought to life in years to come, for a special milestone or anniversary, but not in the near future. Other goals and projects must be fulfilled instead.

But for the six unique books that were published, the vibes I felt around them when they were complete ended up representing different times of day in order. For some reason, Morphine Messiah reminded me of morning, Jonesfruit felt like afternoon, Gemstone Hospital was like evening, Angel Lust seemed to be midnight, Last Night in Jonestown became the witching hour and Ceremonial was early morning, an ideal ending.

Just as I retired from my acrylic on canvas painting with the He’s Still Able synaesthesia art as a perfect finale, my collection of books came full circle in a similar way.