(Dagmara Łuczyńska (Gräfin Marie-Dagmar Sophie Helene Łuczyńska) has a BA in German language and literature, and is a teacher and TV reporter. She conducts research on the lives of the Jonestown girls. She lives in Poland. She may be reached at dagmara97@opoczta.pl.) 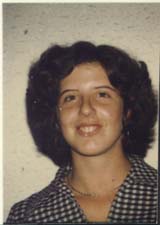 Liane Harris was born on November 27, 1956 in San Francisco. She was the daughter of Sharon Amos (1936-1978), one of Peoples Temple’s top leaders, and her first husband, Sherwin Harris (1937-2016). Her parents soon divorced and remarried other people.

Liane had four siblings: a half-sister Elisabeth and half-brother Adam on her father’s side, and a half-sister Christa and half-brother Martin on her mother’s side. When Liane was 10, her mother joined Peoples Temple, and they moved to Ukiah. In the years that followed, Liane grew up in the Temple, and her contacts with the outside world, including with her father and his new family, became less frequent.

In the summer of 1977, she moved with her mother, Christa and Martin to Georgetown, Guyana, where Sharon worked at the Temple’s headquarters at Lamaha Gardens. This was unusual and showed Jones’ confidence in Sharon, as he generally didn’t allow those who worked in Georgetown to have their families with them.

On the evening of 18th November 1978, Sharon spoke with Jonestown for the last time. Immediately after this conversation, she gathered the children, retrieved a knife, and led them through the living room to the bathroom. There she also called Charles Beikman. This is the last thing we can say for certain about Liane’s final moments. Everything that happened afterwards is a mystery. We can only analyze the hypotheses.

Early theories, including those by Tim Reiterman and John Jacobs in Raven: The Untold Story of Rev. Jim Jones and His People (1982), suggested that Liane actively participated in the murders. She was supposed to help Sharon kill her younger siblings, then kill her mother, and at last commit suicide. However, other theories have emerged.

The main problems with the Reiterman theory come from the results of her autopsy conducted in Guyana, which showed that the girl’s body was heavily bruised, indicating signs of a fight, which in turn make it hard to believe that she was an accomplice. Her father and brother raised serious doubts about Liane’s involvement in the murder, theorizing instead that Liane stood up for her younger siblings when her mother tried to kill them. That seems plausible, because she was very close to Christa and Martin. Her brother’s theory is that Sharon attacked the younger children, who started to cry, and Liane then tried to stop the mother. A brawl ensued, during which Sharon managed to stab all three of her children to death.

Finally, according to the third theory, Chuck Beikman, who was present at least part of the time in the bathroom, killed Sharon and her children, possibly – even likely, given Sharon’s dedication to the cause – at her request. During court proceedings, however, Beikman vehemently denied any active participation in the murder. In the absence of other witnesses or material evidence, though, it is not possible to exclude his participation in the killings.

Apart from the questionable testimony of Charles Beikman, there are no sources available to conclusively confirm what happened at Lamaha Garden on the evening of November 18, 1978. As a result, it will never be possible to recreate the course of events with 100% certainty. All that remains is to analyze the hypotheses and the arguments presented in them.

The theory of Liane’s active involvement in the murders is supported mainly by her unlimited devotion to her mother. It is worth remembering that Liane was in many ways still a child. Recent discoveries in neuroscience demonstrate that the human brain continues to develop to around 25-26 years of age. She was a few days short of her twenty-second birthday. It is a period in which young people do not yet have fully developed critical thinking, and can be easily affected by the emotions and persuasion of others, in particular their relatives. This theory is also confirmed by the testimony of Charles Beikman, which, however, cannot be considered impartial and unequivocally credible.

The main argument for the theory of Liane’s opposition to the murders is the results of her autopsy. Would her body be bruised if she killed her mother and then killed herself with a knife? No. On the contrary, it suggests that Liane fought for her and her siblings’ lives, and was then killed either by her mother or by Charles Beikman. Liane’s brother has also pointed out that she was not as radicalized as her mother was. He considers her to be incapable of killing herself or anyone else.

One thing is for sure, Liane was definitely not guilty of the crime, regardless of whether she took an active part in it. Even if one goes under the assumption that she helped her mother, the argument could be made that she was influenced by her, unable to oppose and prevent a tragedy. Liane had suffered excruciatingly before her death, mentally – watching her beloved family die – and physically – being wounded repeatedly with a knife. She probably didn’t die right away either, but rather bled out for at least a few minutes. A few minutes of hell. However she died, we can definitely consider Liane a victim.