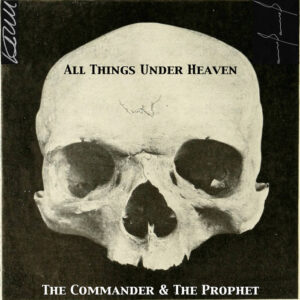 My introduction to Peoples Temple was through an independent CD release featuring the infamous “death tape” recording, Jim Jones’ final message accompanying the mass murder/suicide in Jonestown, Guyana on November 18, 1978. I was young and had never heard anything like that before – the humdrum voice of Jones uttering his demented words, the literal sounds of death – and I found it difficult to believe what I was hearing had really happened. I began investigating Peoples Temple and the devolution that ended with that haunting recording. I found elements of the story that were similar to the controlling and extreme behaviors of the religious environment that I had grown up in, but nothing I had experienced came close to Jonestown. Personally, the story became a cautionary testament to certain religious and political tenets taken to extremes.

Over the years, I have explored many other religions outside of the environment of my youth. I’ve investigated groups similar to Peoples Temple in America and elsewhere along the way. My work as a sound artist has often been inspired by spiritual and philosophical themes that I’ve been interested in. I started a sound project called All Things Under Heaven dedicated to fringe cultural themes, and the debut release featured religious and political extremes. Jim Jones was an obvious choice for inclusion.

I made the primary sound of a track titled “White Night” by altering the clip of Jones’ voice into a violent sonic foundation in order to reflect the intensity of the spoken words. I then mixed in the raw extract of Jones speaking. The track is meant to exhibit the emotion and spirit in the air that night. For a track titled “We Made A Beautiful Day” – an iteration of a statement made by former therapist Jim McElvane on the final tape – I used excerpts of Jones speaking which I feel represent the ultimate zeitgeist of Jim Jones and Peoples Temple that led to that fateful day. I also layered field recordings I made in the mix, such as the demolition of a metal roof, all to exhibit the disintegration.

Above the stage in the pavilion at Jonestown where 918 people died, a sign displayed a maxim by writer George Santayana: “Those who do not remember the past are condemned to repeat it.” The sign appeared in several of the photographs with the bodies that filled the area of the pavilion, thus rendering a macabre image of death which brings the words to life. The story of Jim Jones, Peoples Temple, and Jonestown is an important, albeit horrific, memory in America’s past, and remembering the story through various mediums serves to deter repetition from amnesia.

(Douglas Lucas is an artist who works in sound, performance, installation, and video. He can be contacted at https://douglaslucas.tumblr.com/.)