(Edward Cromarty is a regular contributor to the jonestown report. His other article in this edition is The Jonestown Project: Contributions Then and Now. His complete collection of articles is here. He can be reached at edwardcromarty@hotmail.com.)

It probably should not come as any surprise to students of Jonestown – or of any event in history, for that matter – that there is a significant gap between press reportage of an event as it is happening, and the more sober record of that event as revealed through photographs and film footage, documents and other historical records. And yet the gaps in the presentation of the Jonestown story reflect so much more than a genuine consideration of reality.

Reimagining the words of American historian Philip Jordan (1960), it could be said that the story of Jonestown has been uniformly portrayed through half-truths, prejudices, personal narratives, and prevarications on a canvas of media bias and sensationalism. According to Freire (1970), this illustrates a form of dehumanization in which the histories of oppression are overwritten by the oppressor, resulting in the stories of the repressed being lost or consciously misportrayed in the historical accounts.

Speaking at a conference of sociologists of religion in 2003, Fielding McGehee pointed out that the images of Jonestown seen by the public were mediated either by people outside of Peoples Temple, such as the press and government officials, or of dissident former members, since they constituted the largest bloc of survivors. McGehee (2003) noted that records made in Jonestown did exist in the form of tapes, organizational documents, published resources such as  the Temple newspaper, photographs, and government records of the investigations that followed the deaths, even though these records may be considered another form of mediated image. The witness of a handful of survivors, the suicide note left by Annie Moore, and the death tape (FBI No. Q042) made on November 18 provide first-hand accounts of the final day. 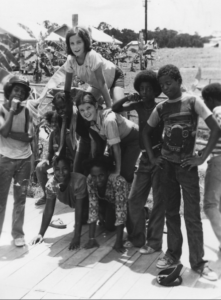 However, the views of Temple members and survivors were silenced, due in part to the overwhelming number of residents who perished in Jonestown and the shock of the events, to be sure, but also because the political views of the Temple – almost all of which were left-leaning – were suddenly thrown into disfavor through their association with the tragedy. This initial silence resulting from trauma, followed by the awakening of survivors and society to public expression of the events, was not unlike what occurred after the Holocaust.

On 12 June 1978 – five months before the deaths – Peoples Temple released an Open Letter to the Media and the Community to refute allegations of the Concerned Relatives that had been picked up by various news media. In its quest to sensationalize the movement, the press ignored the first-hand eyewitness accounts of a respected Methodist minister and his wife, John and Barbara Moore, who had visited Jonestown, and of Guyana Minister of Home Affairs Vibert Mingo, all of whom challenged the negative stories. The Moores participated in a Temple-sponsored press conference on 28 May 1978 at which most of the major media were present, but their eyewitness accounts were ignored by all but one reporter. Instead, according to the Temple, the public was subjected to a fresh barrage of false accusations based on errors and speculation.

A review of multiple media portrayals of the Jonestown community conducted as research for this article corroborates what Cressida Rigney suggested in 2013, that the sensationalism and bias of the press in reporting the Jonestown events contradict an objective approach to history. Even though the press did play a role in bringing information to the public, the market-driven motives of press bias nullified the integrity of objective history (Rigney, 2013).

It must be remembered that the vast majority of films which portray an event are at best historical fiction, a form of entertainment – also market-driven – meant to appeal to the masses (McGehee, 2003). The adaptation of fictional and historical narratives designed to appeal to the audience, through change of culture, demographics, and emotion are common practice in the film industry (Cromarty, Young, & Elias, 2022). Sales and ratings, not valid history, become the driving motivational factors. Adapting the story, characters, and scenes to be culturally relevant to the audience in each period means a film made about Jonestown in 1980 will be substantially different than a movie made in 2022. And yet a consistent bias in films about the Temple is the repression of the message of social justice and equality upon which Jonestown was based.

The adaptation of fictional stories for a modern audience is not problematic as the narrative is not real and adapting the story to be culturally relevant may create a valuable learning experience which may be utilized by educational and social institutions (Cromarty, Young, Elias, 2022). However, the adaptation of historical events to suit cultural trends may be dangerous. The facts of history may not always be pleasant, but if they are not factually communicated, the experiential lessons of history may be lost, with unpredictable results, including repetition of factors which lead to catastrophe. For this reason, the history of Jonestown, honestly narrated, would provide the experience and knowledge for society to build on the community’s successes, as well as depicting its shortcomings.

Several types of media constitute the historical record of Peoples Temple. The most reliable are film, photography, and audio recordings which were made in Jonestown. Although it is important to recognize the limitations on them – primarily, the decisions of the Jonestown leadership on what to record and photograph, and what not to – these forms of media provide the greatest number of authentic scenes of daily life in the community. The Jonestown audiotapes portray both positive and negative events that occurred and provide a less biased perspective. Difficulty in controlling what is said in group discourse provides an honesty and sense of viability to the audio records. 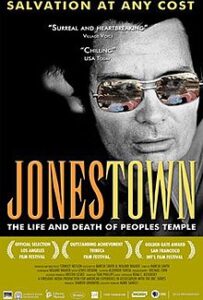 A very effective form of media is survivor testimony, which provides depth of experience to visual and auditory media. Left unedited, survivor testimony combines with the visual and audio records to provide an unbiased perspective. One film that effectively used survivor testimony, in combination with video and auditory experience, was Jonestown: The Life and Death of the Peoples Temple (PBS, 2006). Even so, this documentary did include the director’s point of view, of course, and the editing decisions along the way of which material to include and which to omit did bias the documentary, for marketing purposes, to boost viewer audience. While depicting the hard work of residents who believed in the mission of building a utopian community free of racism, the film did ultimately focus on the sensational aspects of the tragedy.

The nature of questions asked of survivors on talk and news shows also creates gaps between experiential testimony and the perspective of the media host – often exploitative and sensationalistic – which tend to skew the story. For example, survivors talking from heartfelt experience about the daily and social activities that were important to them may find these viewpoints suppressed, while the conversation moves inexorably towards the single day of November 18. 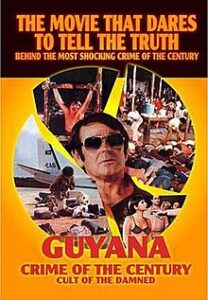 The first two theatrical movies released shortly after 1978 – Guyana Cult of the Damned (1979) and The Guyana Tragedy (1980) – while having different perspectives, most reflect the biases which existed immediately following the tragedy. This is probably because they were made before any of the documentary record of Jonestown emerged. In comparison, later movies that had the benefit of this record tend to rely on a combination of visual, audio, and interview resources. Still, these films often focus on a few events rather than the daily life of the people and are culturally adapted to appeal to expectations of the audience in the time period the movie was released.

Another trend in the fictionalization of the life and activities of the Jonestown project has emerged. This is the distortion of the Jonestown story in the production of horror movies. This purposeful misportrayal of the facts about the Jonestown community, which sought to establish a utopian society free of discrimination, is abusive and disrespectful. It is an example of unscrupulous marketing and the capitalization of ethics that plagues corporate media and American social institutions. Such distortions can only be condemned, as they dehumanize and minimize the valuable contributions of the people who lived in Jonestown and the radical social change of which it was an early part.

With first-hand historical information provided by the survivors of Jonestown, and the records made by the people who built and lived there, the fictional depictions of Jonestown should respect the subjects seen through the camera lens. The hard work and utopian ideals of the people deserve acknowledgement and all consideration for the benefits they offer to the present day.

Stacy, R. (2013). Those who cannot remember the past are condemned to repeat it. jonestown report, Alternative Consideration of Jonestown & Peoples Temple, San Diego State University.