(Preston Jones provides content for the website “Military Response to Jonestown.” His other article for this year’s edition of the jonestown report is Among the dead: Arkansans died at Jonestown in 1978. He can be reached at pjones@jbu.edu.) 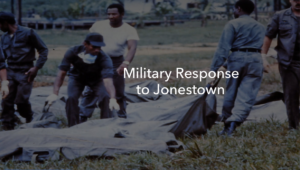 In this fiscal year, the Military Response to Jonestown website recorded one discussion with Ronald Taylor, an Army crew chief who served aboard a plane that took remains from Jonestown to Dover Air Force Base.

The Project was scheduled to have a public discussion on the main campus of the University of Arkansas with David Netterville, the first U.S. special forces member to arrive in Jonestown, but a death in his family forced cancellation. A 2019 interview with Mr. Netterville appears here.

Among the Project’s most watched recordings is a discussion with Randy Johnson, the Guyanese military commander who first arrived at Jonestown.

The Military Response to Jonestown Project is related to a broader project that records the memories of military service members who served in difficult circumstances, usually combat zones. The Project is always ready to hear from veterans who went to Jonestown or were otherwise involved in the broader response to the tragedy there.

The Project is also eager to record the memories of Jonestown/Peoples Temple family members. Since the Project began, we have had the privilege of recording discussions with former members, including Eugene Smith, David Parker Wise, Hue Fortson, Jr., and Thomas Beikman.