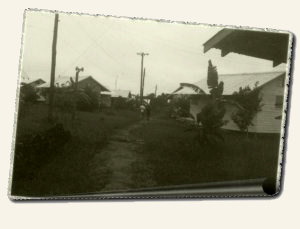 In May 1978, John and Barbara Moore visited their daughters – Carolyn Layton and Annie Moore, two women in the Temple leadership – and their grandson, Jim Jon [Kimo] Prokes in Jonestown, Guyana. While the Moores were aware of the obvious isolation of the community from the rest of the country – and even more so from the United States – and while they observed elements of paranoia due to both real and imagined persecutions of the Temple leadership, they were genuinely impressed with what they saw.

The Moores wrote a report of their visit upon their return, and it is published in both the original form and one with minor spelling corrections. Peoples Temple used it as a promotional tool as a means to refute the Concerned Relatives’ descriptions of Jonestown as a concentration camp. Critics have attacked the report as painting an overly-optimistic picture of Jonestown, and to the degree that it omits the reservations that the Moores felt, the charges have some weight. But the report is in keeping with the longstanding practice of the Moore family, to affirm their daughters and respect their decisions in public settings, and to express their misgivings to their children in private.

Nevertheless, the report does include some factual inaccuracies. John Moore “presumed” the houses and dorms had running water, but they didn’t. He says that he “saw nothing to suggest any truth” in the assertion that people were being held against their will, yet by this time, the community was at least restraining the disaffected, practices that eventually included sedation of some members. Even so, his depiction of the group as a community trying to create a utopia is both heartfelt and basically sound.

Several of the pictures on this website – including these  – were taken during that trip to Jonestown.

In addition to writing this report, John and Barbara Moore participated in a press conference to describe their trip to the media. Called by the Temple’s attorney Charles Garry, the conference also included several other relatives of Jonestown residents who were sympathetic to the Jonestown project. The tape of that press conference may be found as a transcript and summary.

It should be noted that John and Barbara Moore are also the parents of Rebecca Moore and father- and mother-in-law of Fielding M. McGehee III, the managers and researchers for this website.