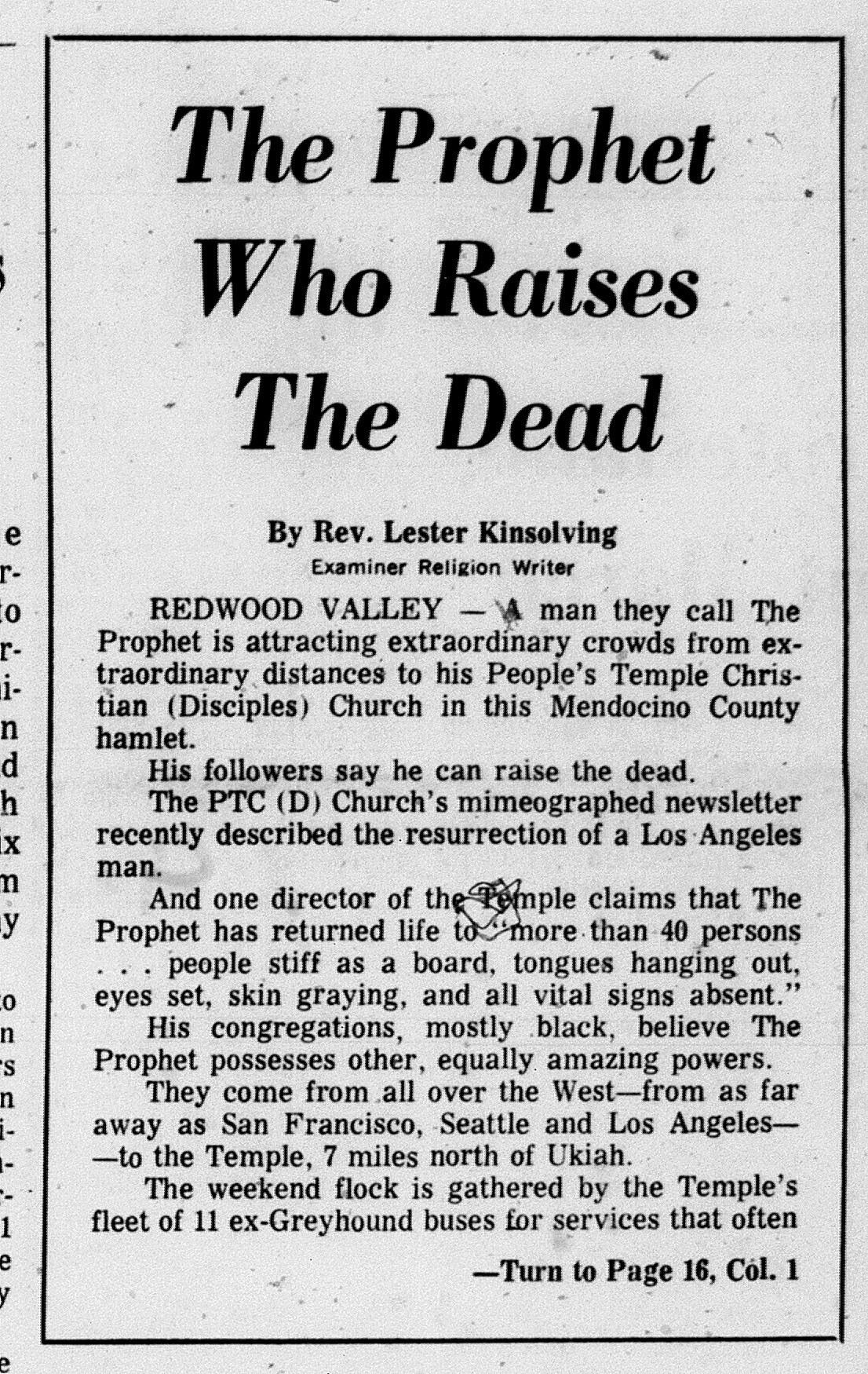 REDWOOD VALLEY — A man they call The Prophet is attracting extraordinary crowds from extraordinary distances to his People’s Temple Christian (Disciples) Church in this Mendocino County hamlet.

His followers say he can raise the dead.

And one director of the Temple claims that The Prophet has returned life to “more than 40 persons…people stiff as a board, tongues hanging out, eyes set, skin graying, and all vital signs absent.”

His congregations, mostly black, believe The Prophet possesses other, equally amazing powers. They come from all over the West – from as far away as San Francisco, Seattle and Los Angeles – to the Temple, 7 miles north of Ukiah.

The weekend flock is gathered by the Temple’s fleet of 11 ex-Greyhound buses for services that often run from 11 in the morning until 11 at night, broken only for communal meals prepared by Temple cooks. Congregations number over a thousand and attendance at weekly services is similarly impressive.

The Prophet (or Prophet of God, as he prefers to call himself) is the Rev. Jim Jones, 41, the part-Cherokee former pastor of the People’s Temple Christian Church in Indianapolis. 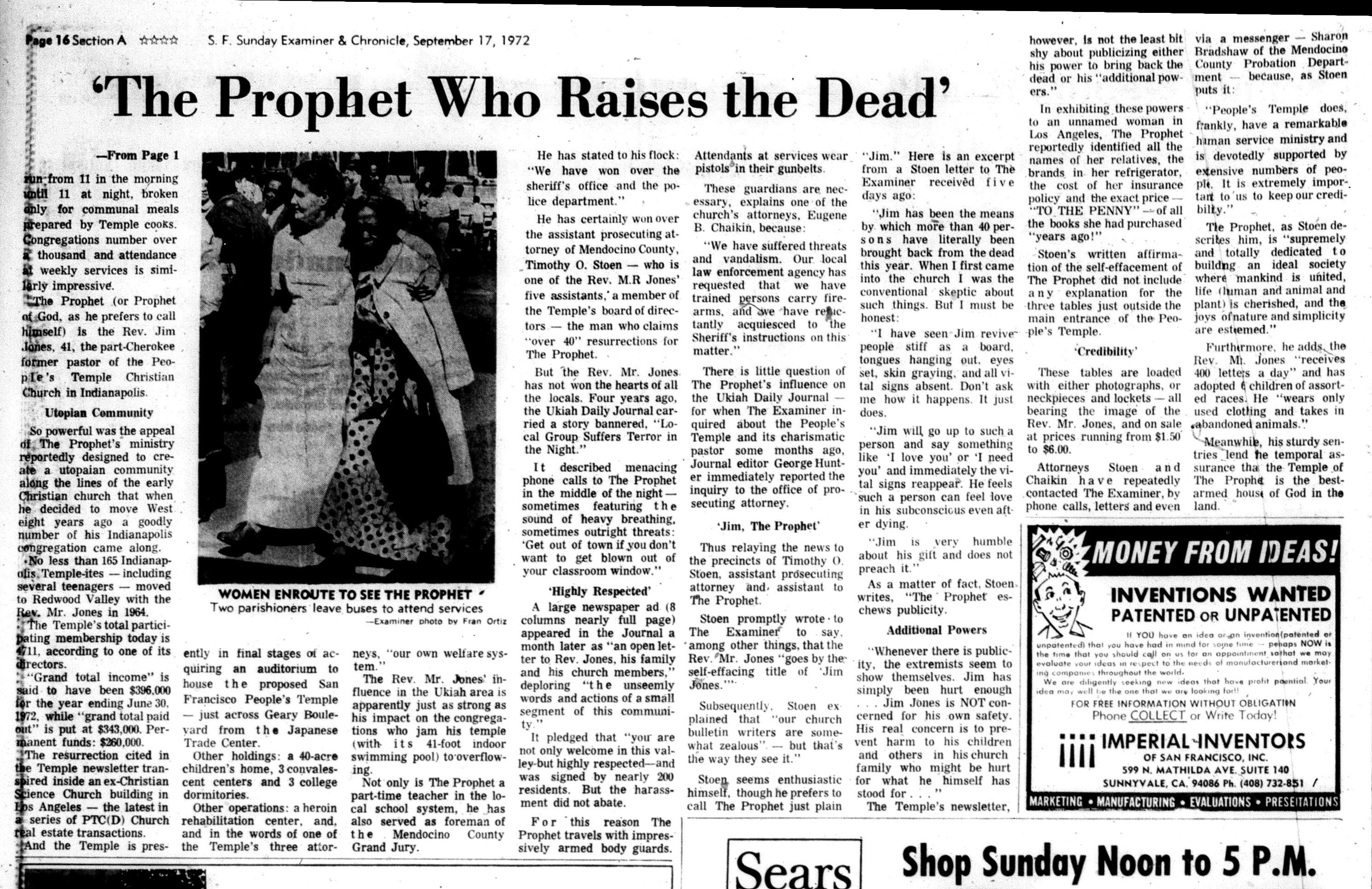 So powerful was the appeal of The Prophet’s ministry reportedly designed to create a Utopian community along the lines of the early Christian church that when he decided to move west seven years ago, a goodly number of his Indianapolis congregation came along.

No less than 165 Indianapolis Temple-ites – including several teenagers – moved to Redwood Valley with the Rev. Mr. Jones in 1965. The Temple’s total participating memberships today is 4,711, according to one of its directors.

The resurrection cited in the Temple newsletter transpired inside an ex-Christian Science Church building in Los Angeles – the latest in a series of PTC (D) Church real estate transactions. And the Temple is presently in final stages of acquiring an auditorium to house the proposed San Francisco People’s Temple – just across Geary Boulevard from the Japanese Trade Center.

Other holdings: A 40-acre children’s home, 3 convalescent centers, and 3 college dormitories. Other operations: A heroin rehabilitation center and, in the words of one of the Temple’s three attorneys, “our own welfare system.”

The Rev. Mr. Jones’s influence in the Ukiah area is apparently just as strong as his impact on the congregations who jam his temple (with its 41-foot indoor swimming pool) to overflowing. Not only is The Prophet a part-time teacher in the local school system, he has also served as foreman of the Mendocino County Grand Jury.

He has stated to his flock:

“We have won over the sheriff’s office and the police department.”

He has certainly won over the assistant prosecuting attorney of Mendocino County, Timothy O. Stoen – who is one of the Rev. Mr. Jones’s five assistants, a member of the Temple’s board of directors – the man who claims “over 40” resurrections for The Prophet.

But the Rev. Mr. Jones has not won the hearts of all the locals. Four years ago, the Ukiah Daily Journal carried a story bannered, “Local Group Suffers Terror in the Night.”

It described menacing phone calls to The Prophet in the middle of the night – sometimes featuring the sound of heavy breathing, sometimes outright threats: “Get out of town if you don’t want to get blown out of your classroom window.”

A large newspaper ad (8 columns, nearly full page) appeared in the Journal a month later as “an open letter to Rev. Jones, his family and his church members,” deploring “the unseemly words and actions of a small segment of this community.”

It pledged that “you are not only welcome in this valley but are highly respected” – and was signed by nearly 200 residents. But the harassment did not abate.

For this reason, The Prophet travels with impressively armed body guards. Attendants at services wear pistols in their gun belts.

These guardians are necessary, explains one of the church’s attorneys, Eugene B. Chaikin, because, “We have suffered threats and vandalism. Our local law enforcement agency has requested that we have trained persons carry firearms, and we have reluctantly acquiesced to the Sheriff’s instructions on this matter.”

There is little question of The Prophet’s influence on the Ukiah Daily Journal – for when The Examiner inquired about the People’s Temple and its charismatic pastor some months ago, Journal editor George Hunter immediately reported the inquiry to the office of prosecuting attorney.

Thus relaying the news to the precincts of Timothy O. Stoen, assistant prosecuting attorney and assistant to The Prophet. Stoen promptly wrote to The Examiner to say, among other things, the Rev. Mr. Jones “goes by the self-effacing title of ‘Jim Jones.’”

Subsequently, Stoen explained that “our church bulletin writers are somewhat zealous” – but that’s the way they see it.” Stoen seems enthusiastic himself, though he prefers to call The Prophet just plain “Jim.” Here is an excerpt from a Stoen letter to The Examiner received five days ago:

“Jim has been the means by which more than 40 persons have literally been brought back from the dead this year. When I first came into the church, I was the conventional skeptic about such things. But I must be honest:

“I have seen Jim revive people stiff as a board, tongues hanging out, eyes set, skin graying, and all vital signs absent. Don’t ask me how it happens. It just does.

“Jim will go up to such a person and say something like, ‘I love you’ or ‘I need you’ and immediately the vital signs reappear. He feels such a person can feel love in his subconscious even after dying.

“Jim is very humble about his gift and does not preach it.” As a matter of fact, Stoen writes, “The Prophet eschews publicity.”

[Stoen continued] “Whenever there is publicity, the extremists seem to show themselves. Jim has simply been hurt enough…. Jim Jones is NOT concerned for his own safety. His real concern is to prevent harm to his children and others in his church family who might be hurt for what he himself has stood for…” The Temple’s newsletter, however, is not the least bit shy about publicizing either his power to bring back the dead or his “additional powers.”

In exhibiting these powers to an unnamed woman in Los Angeles, the Prophet reportedly identified all the names of her relatives, the brands in her refrigerator, the cost of her insurance policy, and the exact price – ”TO THE PENNY” – of all the books she had purchased “years ago!”

Stoen’s written affirmation of the self-effacement of The Prophet did not include any explanation for the three tables just outside the main entrance of the People’s Temple.

These tables are loaded with either photographs, or neck pieces and lockets – all bearing the image of the Rev. Mr. Jones, and on sale at prices running from $1.50 to $6.00.

Attorneys Stoen and Chaikin have repeatedly contacted The Examiner, by phone calls, letters, and even via messenger – Sharon Bradshaw of the Mendocino County Probation Department – because, as Stoen puts it:

“People’s Temple does, frankly, have a remarkable human service ministry and is devotedly supported by extensive numbers of people. It is extremely important to us to keep our credibility.”

The Prophet, as Stoen describes him, is “supremely and totally dedicated to building an ideal society where mankind is united, life (human and animal and plant) is cherished, and the joys of nature and simplicity are esteemed.”

Furthermore, he adds, the Rev. Mr. Jones “receives 400 letters a day” and has adopted 6 children of assorted races. He “wears only used clothing and takes in abandoned animals.”

Meanwhile, his sturdy sentries lend the temporal assurance that the Temple of The Prophet is the best-armed house of God in the land.

END OF PART ONE