REDWOOD VALLEY – Mendocino County’s assistant district attorney – who has written that his pastor, the Rev. Jim Jones has raised 40 people from the dead – has confirmed reports that he himself has solemnized the marriage of a minor girl who joined his church.

Timothy O. Stoen, who in addition to his duties as assistant DA, is attorney for and board member of Pastor Jones’s People’s Temple Christian (Disciples) Church in this hamlet near Ukiah, admitted he is not an ordained clergyman.

When asked by what authority he had officiated at the marriage of Mildred “Mickie” Johnson (who has now returned to her family in Indianapolis), Stoen contended:

“I meet all the requirements of the State Civil Code.”

When asked which section of the state code permits an attorney (rather than a judge) to solemnize marriages, Stoen replied:

“I’ll have to ask you to let me go back and check that.”

The issue arose in a legal affidavit filed yesterday in Indianapolis by Mr. and Mrs. Cecil Johnson.

The Johnsons, former parishioners of the Rev. Mr. Jones when he was a pastor of the Indianapolis People’s temple, charged that after Stoen married their daughter (to a man identified only as “Junius”), she was placed on the welfare rolls of Mendocino County.

The Johnsons also charged that Mildred was obliged to give her monthly welfare check of $95 to The People’s Temple – and that in August of 1971, Stoen had written them for permission to appoint a legal guardian for their other daughter, Gwin, age 18.

(The two girls were among former parishioners – including a number of teenagers – who followed the charismatic prophet-pastor, who left Indiana for California in 1965.)

“Jones said that the world would end on July 16, 1967, and encouraged the congregation here to pool their money and follow him to California – where he promised they would find a place where only they would be safe from this impending disaster.”

The Johnson affidavit also charges that the Rev. Mr. Jones:

“Uses people to visit potential church members, noting anything personal in the house, like addresses on letters, types of medicine in the medicine cabinet, or pictures of relatives.

“Then, when they show up in church, he tells them things about their ailments and the kinds of pills they take.”

When asked to comment on this charge, Stoen explained:

“I don’t remember anything like this. I believe Jim’s gift is authentic – or as he said in his sermon yesterday, he has paranormal gifts.”

On Sunday, Sept. 10, at 11:15 p.m. (following this writer’s first visit to a People’s Temple service in Redwood valley), Stoen telephoned long distance to say among other things:

“I suppose you’ve heard a rumor that Jim Jones was run out of Indianapolis for faith healing?”

When asked to elaborate, Stoen explained:

“Well, I’ve seen the story in the Indianapolis Star.”

What information did this Star story contain?

“I don’t remember the details,” replied the assistant district attorney. 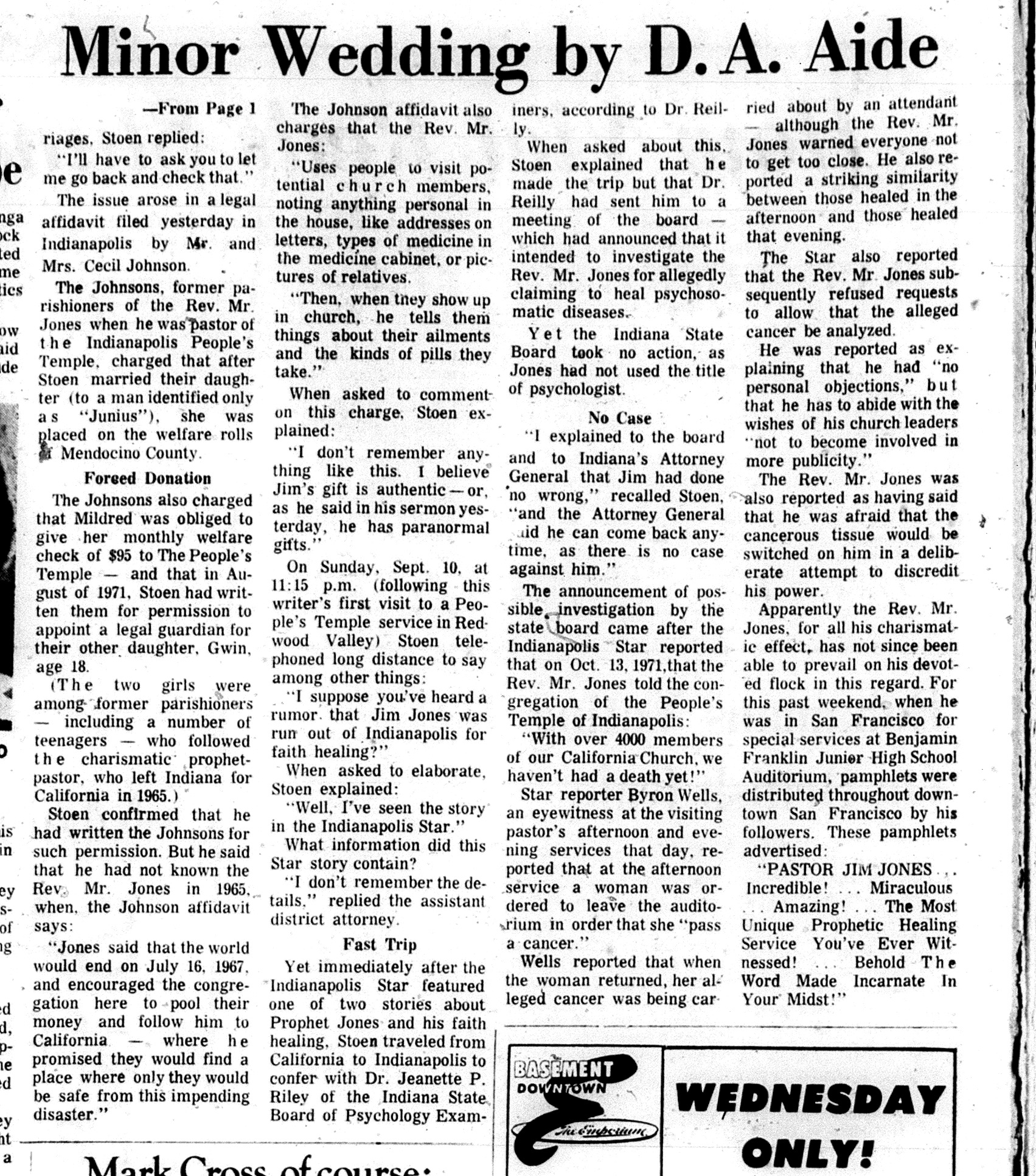 Yet immediately after the Indianapolis Star featured one of two stories about Prophet Jones and his faith healing, Stoen traveled from California to Indianapolis to confer with Dr. Jeanette P. Riley of the Indiana State Board of Psychology Examiners, according to Dr. Reilly.

When asked about this, Stoen explained that he made the trip but that Dr. Reilly had sent him to a meeting of the board – which had announced that it intended to investigate the Rev. Mr. Jones for allegedly claiming to heal psychosomatic diseases.

Yet the Indiana State Board took no action, as Jones had not used the title of psychologist.

The announcement of the possible investigation by the state board came after the Indianapolis Star reported that on Oct. 13, 1971, the Rev. Mr. Jones told the congregation of the People’s Temple of Indianapolis:

“With over 4000 members of our California Church, we haven’t had a death yet!”

Star reporter Byron Wells, an eyewitness at the visiting pastor’s afternoon and evening services that day, reported that at the afternoon service a woman was ordered to leave the auditorium in order that she “pass a cancer.”

Wells reported that when the woman returned, her alleged cancer was being carried about by an attendant – although the Rev. Mr. Jones warned everyone not to get too close. He also reported a striking similarity between those healed in the afternoon and those healed that evening.

The Star also reported that the Rev. Mr. Jones subsequently refused requests to allow that the alleged cancer be analyzed.

He was reported as explaining that he had “no objections,” but that he has to abide with the wishes of his church leaders “not to become involved in more publicity.”

The Rev. Mr. Jones was also reported as having said that he was afraid that the cancerous tissue would be switched on him in a deliberate attempt to discredit his power.

“I’ve done more than any other faith healer,” he was reported as explaining, “that’s why I don’t want any more publicity, either favorable or unfavorable.”

Apparently, the Rev. Mr. Jones, for all his charismatic effect, has not been able to prevail on his devoted flock in this regard. For this past weekend, when he was in San Francisco for special services at Benjamin Franklin Junior High School Auditorium, pamphlets were distributed throughout downtown San Francisco by his followers. These pamphlets advertised:

“PASTOR JIM JONES…Incredible!…Miraculous…Amazing!…The Most Unique Prophetic Healing Service You’ve Ever Witnessed!…Behold The Word Made Incarnate In Your Midst!”