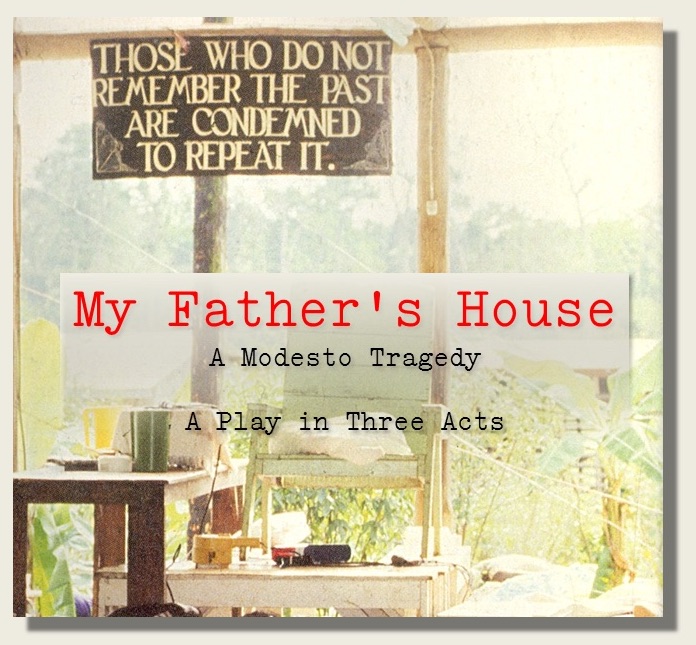 In the year since I last wrote about my stage play My Father’s House – which focuses on the final days of former Peoples Temple member Mike Prokes – I have spent a great deal of time doing additional research and interviewing more people who were a part of Peoples Temple and Jonestown, or who knew Mike. With what I learned, I rewrote the play, adding some critical scenes and refining existing scenes.

There has been progress on a number of fronts with this work.

• I have been collaborating on this project with a variety of theater, performing arts, and educational organizations in the Modesto, California area where I – and Mike – grew up and where part of the play takes place. Jack Souza, Founder and Artistic Director of The Prospect Theater Project, will be directing and co-producing this project in association with Jim Johnson and the Gallo Center for the Arts, Mike Sundquist and the Modesto Junior College Division of Arts, Humanities and Communications, and John Mayer and the Drama Department at CSU Stanislaus.

This past August, we held a table reading with several local and age-appropriate actors, to learn how we could refine the characters, scenes, and dialogue. I also received feedback from John Hall, author of Gone from the Promised Land:  Jonestown in American Cultural History. I will be doing one final rewrite in anticipation of premiering a full production at the Gallo Center in 2012.

• I am also designing the staging and collecting the media that will help tell the story. I want to stage and present the play in a way that reflected the mediated, Marshall McLuhan world that Mike and I grew up in and that helped shape us. We boomers were the first generation to mark our life passages with movies, music, comic books, television, and other media, and it’s important to weave that experience throughout the fabric of the play. I hope to emulate what Green Day has done with American Idiot and expand upon it using today’s technology. In some scenes, I will use digital recordings of actors, as well as exterior and interior landscapes, projected on a variety of different sized screens and types of surfaces that the live actors will interact with, in a style similar to the American Conservatory Theater’s stage version of the movie, Brief Encounter. Ultimately, this play has been designed to blur the boundaries between theatrical, cinematic, and digital storytelling and the traditional staging experience.

• I am also consulting with a social media expert to see how I can use that communication channel to promote the project, as well as provide feedback and interactivity. I would love to experiment with enriched media to see how I can utilize cell phones, tablets, and other digital devices to enhance the performance. This should also lead me to explore various techniques to provide live, real-time audience feedback to the director and performers. Because the audience is an integral part of this performance, I am seeking ways to involve them more.

• And I am looking for ways to present this story around California and the rest of the country, in collaboration with local theater companies and educational institutions. Like Moisés Kaufman’s The Laramie Project and Leigh Fondakowski’s The People’s Temple, I think this project will resonate with audiences beyond my home town.

• Finally, there is the financial aspect of this work. My colleagues and I are in the beginning stages of raising funds to underwrite the production. The Gallo Center will contribute some personnel and resources to the project. The Prospect Theater, MJC, and CSUS will be providing their time and expertise. However, we will need additional funds to pay for production personnel, materials, and equipment. Thus, I will be contacting friends, family, and colleagues, as well as individuals, businesses, and organizations in the community, to help pay for the play.

It has been a long, painful, enlightening, and exciting journey thus far. I am looking forward to the next stage.

(Ken White can be reached at KenWhite@KW209.com.)