In the summer of 1978, three of my childhood friends left home to spend time with their grandmother, and never returned. Teri, Scott, and Alfred Smart will stay forever young, because my memories are ageless.

Our houses were across the street from each other on Claretta Street in Lake View Terrace, California. The street was in the foothills and went up the side of a mountain. We were at the age of what I like to call “wonder,” mainly because we wondered about all things, like religion, how a woman got pregnant, why grown-ups like alcohol, and why do Miracle Whip sandwiches taste so good?

Teri was 14 and I was 12. She was like a sister to me in many ways. We looked alike, enjoyed doing the same things, and had parents who were always involved at church. Her father was a pastor of a local church where I took Charm School classes. We shared a lot of our free time playing on Claretta Street, building go-carts out of spare parts from broken tricycles, big wheels, and toys. Oh, what fun it was to take our go-carts up to the top of the street and race to the bottom. Oftentimes our go-carts would fall apart on the way down, and then we would have fun putting them back together again. Teri was always so good-natured and very intelligent. She would say things to make me think about what was going on in the world. Her favorite song was “Wake up Everybody,” by Harold Melvin & the Blue Notes. She sang that doggone song all the time! Sometimes she would just burst out with “Wake up Everybody!” That song will forever be etched in my mind as Teri’s song. 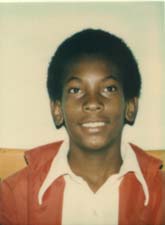 Scottie and I were just developing a special friendship. He was 15 years old, and I secretly adored him. Together he and I built a little clubhouse at the top of our street. We were incredibly proud of our work. One night we stayed out until dark trying to finish it. That was the night he told me that we were building it so that we could play house, and that one day he was going to marry me. Up until that moment, I thought he saw me as a little sister, and I wondered what Teri would think. He hugged me under the starry sky that night and told me to look at how beautiful it was. He was such a kind and tender-hearted boy. He was special that way, different from other boys and so very patient.

Al, the older brother, was like a tall giant to me. I remember one day when he was swinging an axe and accidentally chopped my little brother’s pinky toe right through his tennis shoe. Al was scared to death when the blood started to flow and my brother had to go to the hospital for stitches. After that, we were not allowed to be near him.

I would often go to Michigan during summer and spend time with my grandparents, so when Teri said that she was going to spend the summer with her grandmother, I did not think much of it. When I returned home at the end of the summer, I asked when they would be back. No one had an answer. A few months later, my parents showed me the news on television about Jonestown and what had happened there.

I spent many years in disbelief and denial that my friends would ever drink that poison. I convinced myself they weren’t gone, but somehow had made it out alive. Al, that tall giant, would have protected them.

I have tried to remove the stain of sadness that comes to mind when I think of their final moments, choosing instead to lead my thoughts to the wonderful memories we shared when we thought we had all the time in the world. Whenever I look up into the night sky, I remember Scottie and his words to me as we stared up at the stars. I believe that they are there… Somewhere out there.