The Ground Breaking Ceremony for FATHER DIVINE’S Library Took Place at the Liberty Plaza,
The Mount of the House of the Lord, August 12, 2008, 10 AM

As a sign of approval FATHER us sent this double rainbow
two days prior to the ground-breaking ceremony.

We thank YOU, FATHER DIVINE that on August 10th, 2008 two days prior to the Ground Breaking Service a beautiful demonstration and sign of FATHER DIVINE’S pleasure and endorsement of the proceedings that were to begin, took place in the form of two beautiful, brilliant rainbows which were a real joy and inspiration to observe.

This was a glorious way for this time in eternity to begin.

Then on August 12th, 2008, 10 AM MOTHER DIVINE The Spotless Virgin Bride of The Lamb called those at the Ground Breaking Ceremony to order. 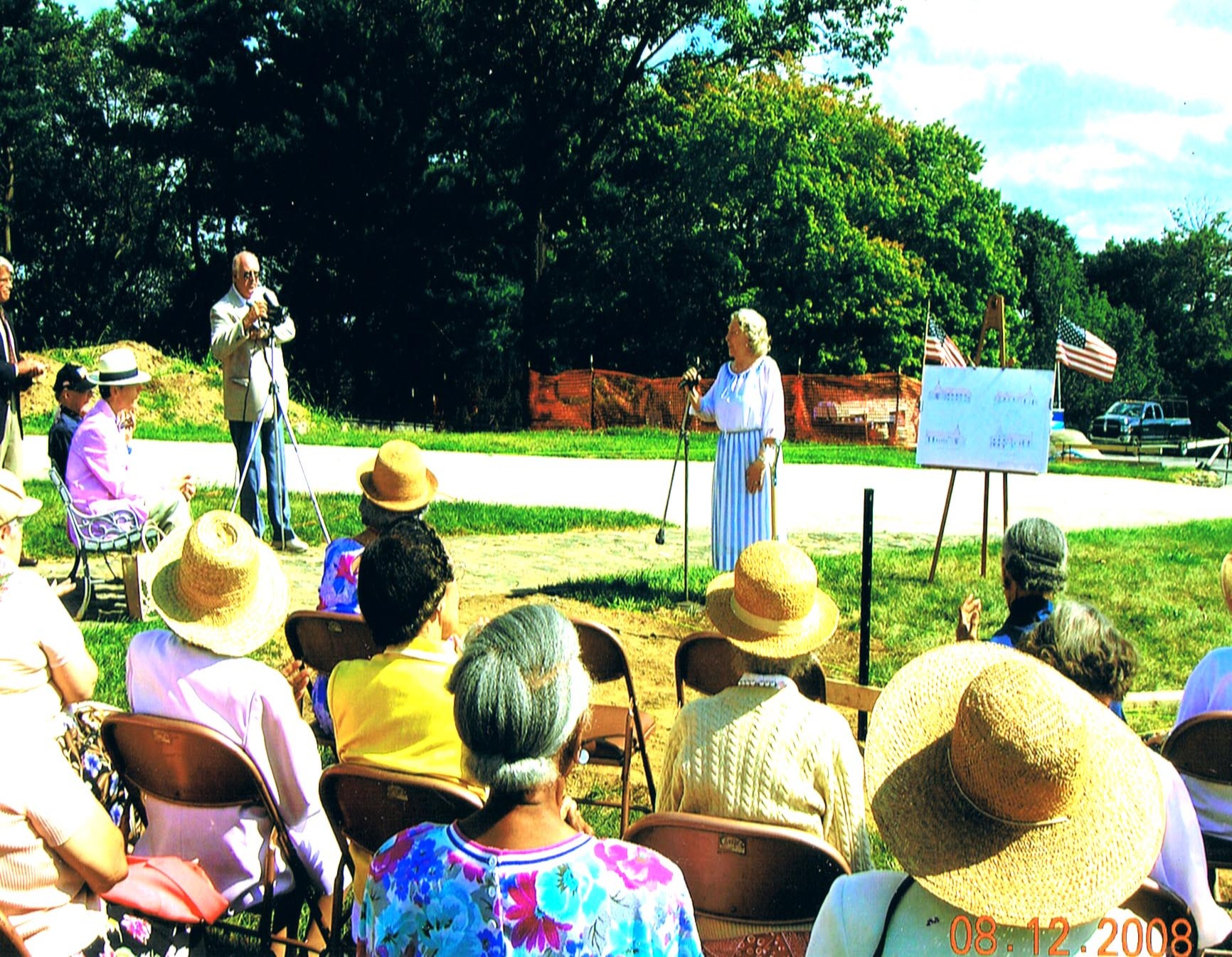 SHE had just received the microphone from Mr. Roger Klaus, Trustee of the Palace Mission Church and supervisor of the construction project who is shown here taking pictures. That area behind and to MOTHER’S right is where the Library will stand.

MOTHER DIVINE opened the ceremony with remarks of thanksgiving and praise to FATHER DIVINE for HIS Actual Presence with us here and for bringing us to this point of breaking ground for the construction to begin. 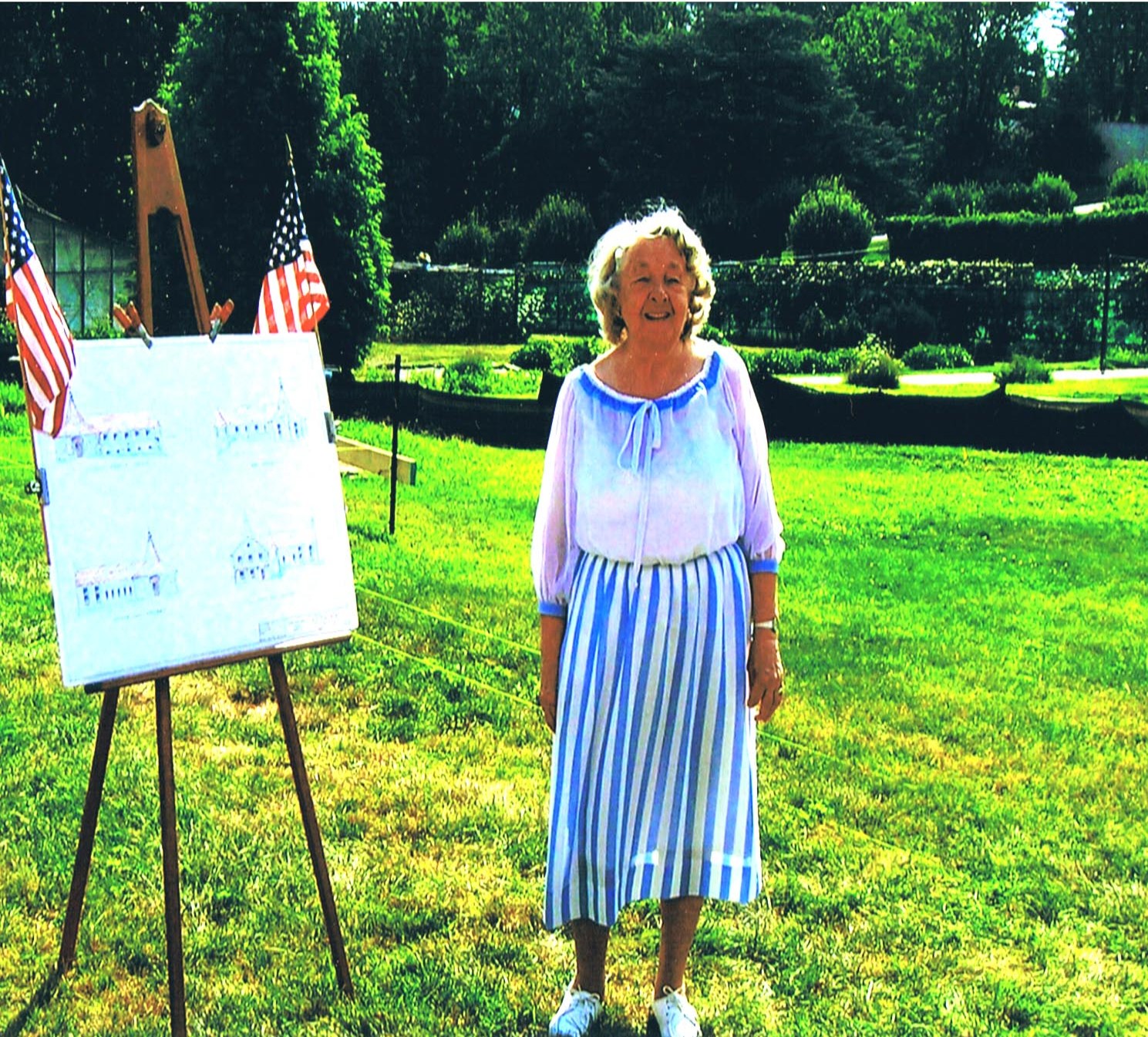 Now all of the permits and other points of legality have been overcome.

Mr.Fred L. Bissinger Jr. spoke at length about his pride in being able to play a part in this unfolding of the wonderful Words and Works of FATHER DIVINE. and the history thereof. 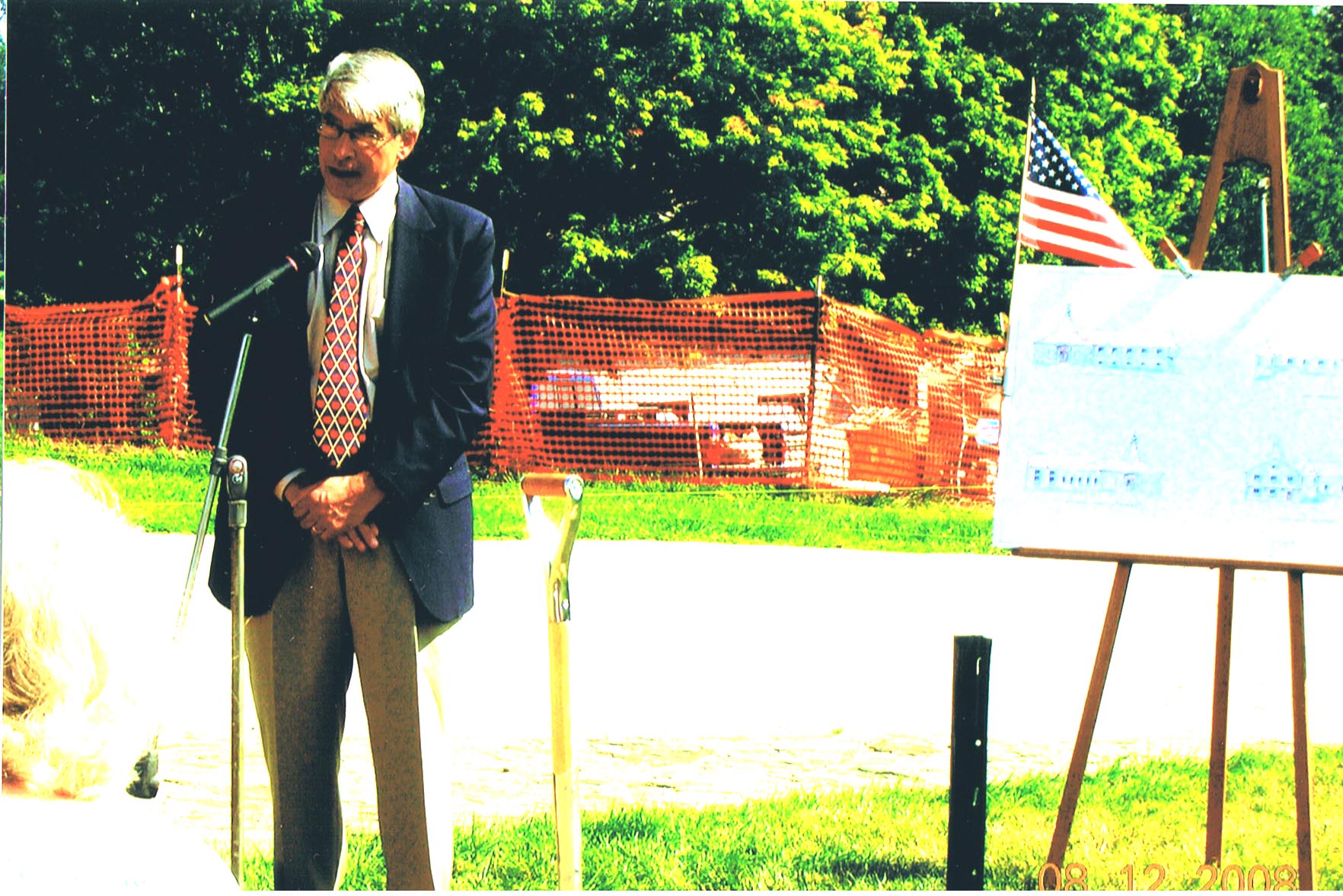 He explained that as he learned more and more of FATHER DIVINE and His Followers the inspiration for the design of the Library began to flow. He then elaborated on the details of the design. 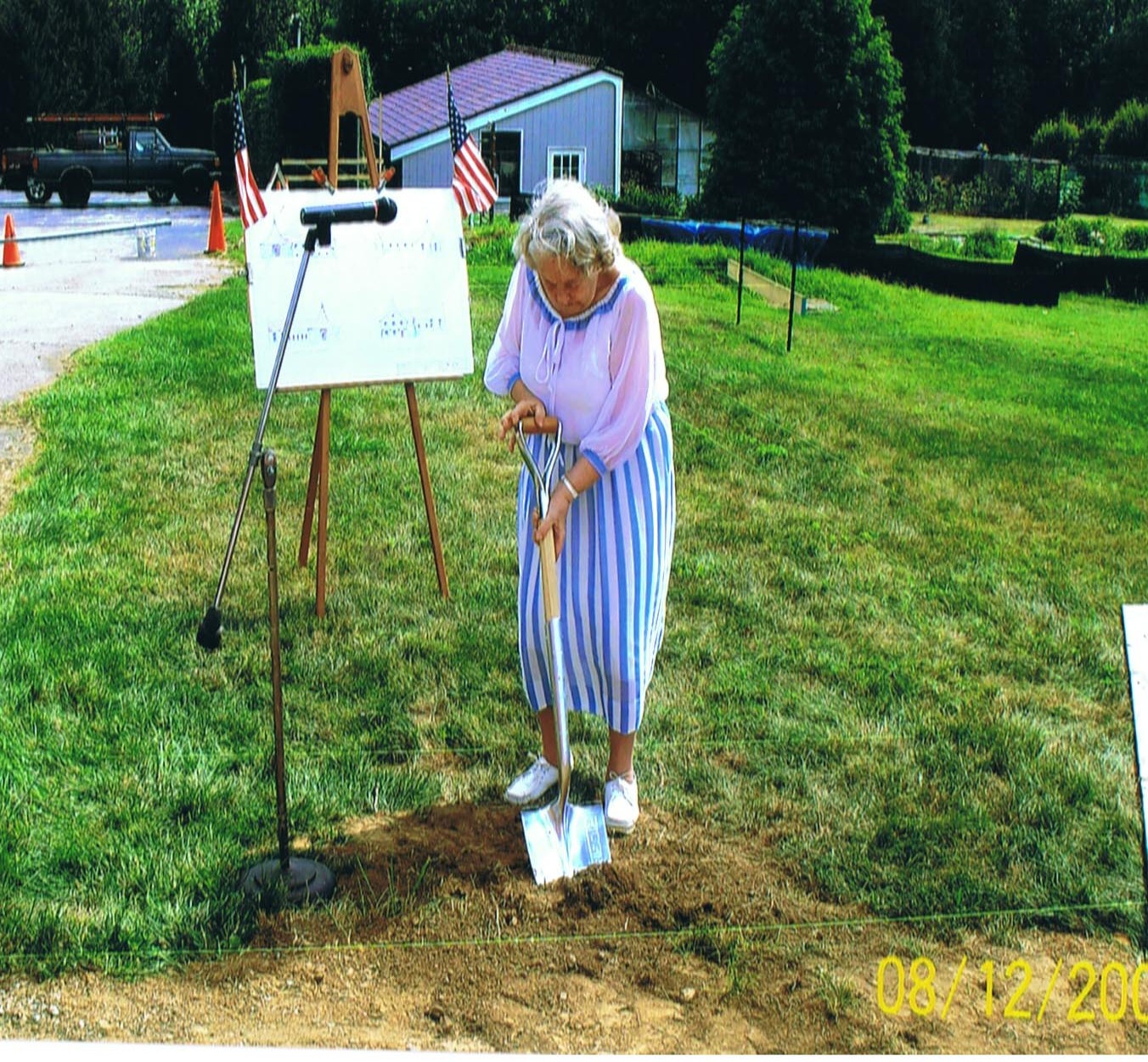 MOTHER DIVINE then took the beautiful chrome shovel and ceremoniously dug up the first shovel of dirt to break ground for the construction of the Library to begin.

Behind MOTHER DIVINE is the greenhouse and its utility building which is temporarily being used as the Contractors office. 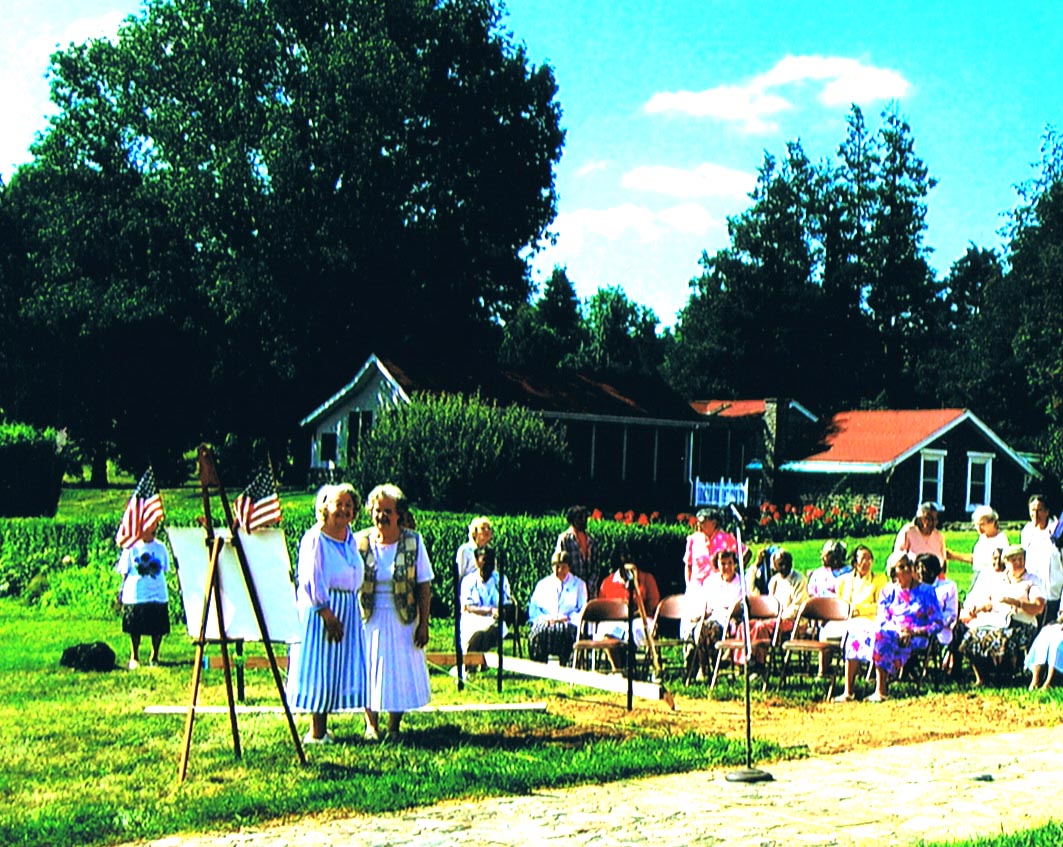 MOTHER DIVINE conversing with another follower shortly after the ground breaking took place.

In the background is Contentment Cottage and The Welcome Center Area.

Mr. Jerry Hadden, General Contractor, spoke of his appreciation and the honor he felt in being able to be a part of this project. 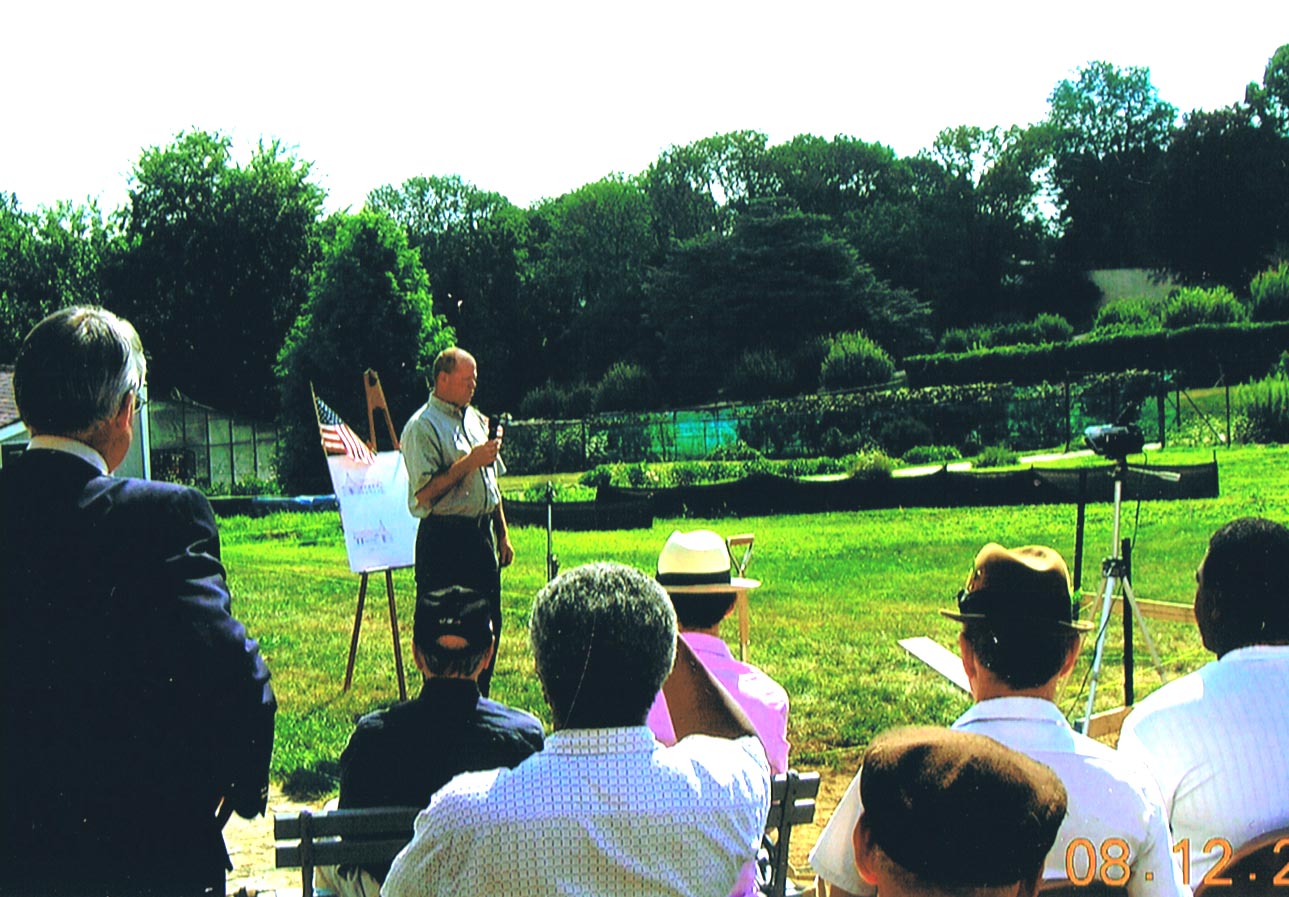 In the background is the vegetable garden, the grape arbor, and the fruit orchard.

Mr. David Perkins, of the Perkins Construction Company told of his gratitude for the many years that he has known of and dealt with the Peace Mission Movement.

The Equipment Building in the background is in the Hilltop House area. 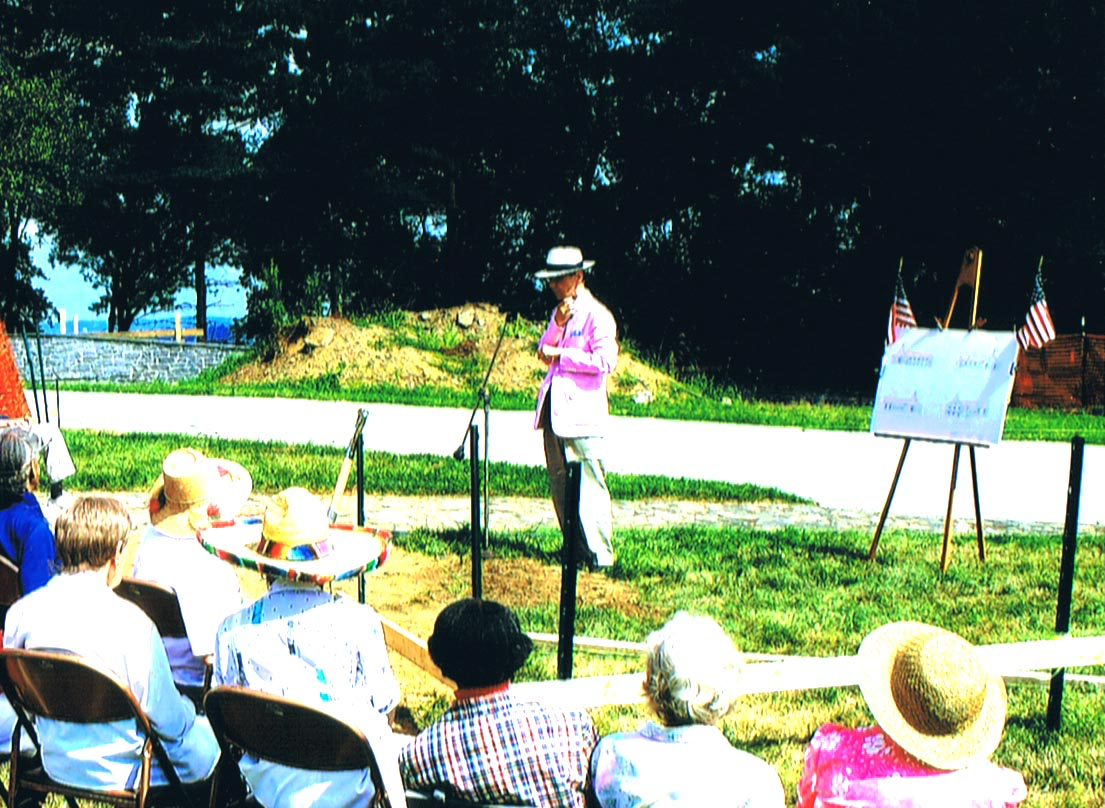 Professor Leonard Primiano of Cabrini College spoke of the great significance of this library. That it would be a living thing. It would not be as many libraries are, silent places for just study and contemplation but would be a vibrant exciting experience for everyone that partook of its offerings.

It would be a fountain of living water for all to partake of if they will. 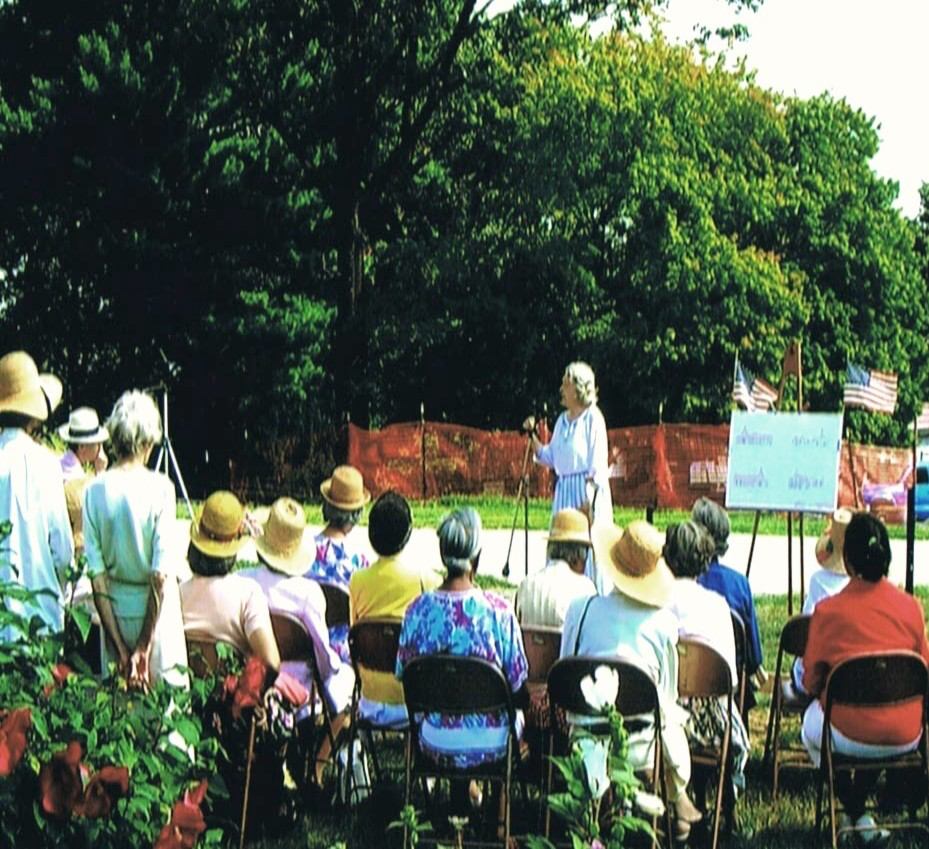 MOTHER DIVINE expressing Her appreciation to Mr Bissinger, the Contractor and the Construction crew plus the Many guests and Follower of the Peace Mission Movement for their coming here this day. She was pleased with the wonderful support their interest has provided.

MOTHER DIVINE is concluding the service which took an hour and a half and is inviting all who desired, to take a closer look at the four architectural drawings of the Library

Although difficult to see in a small photograph they were very pleasant to view as they were presented on the easel as shown. 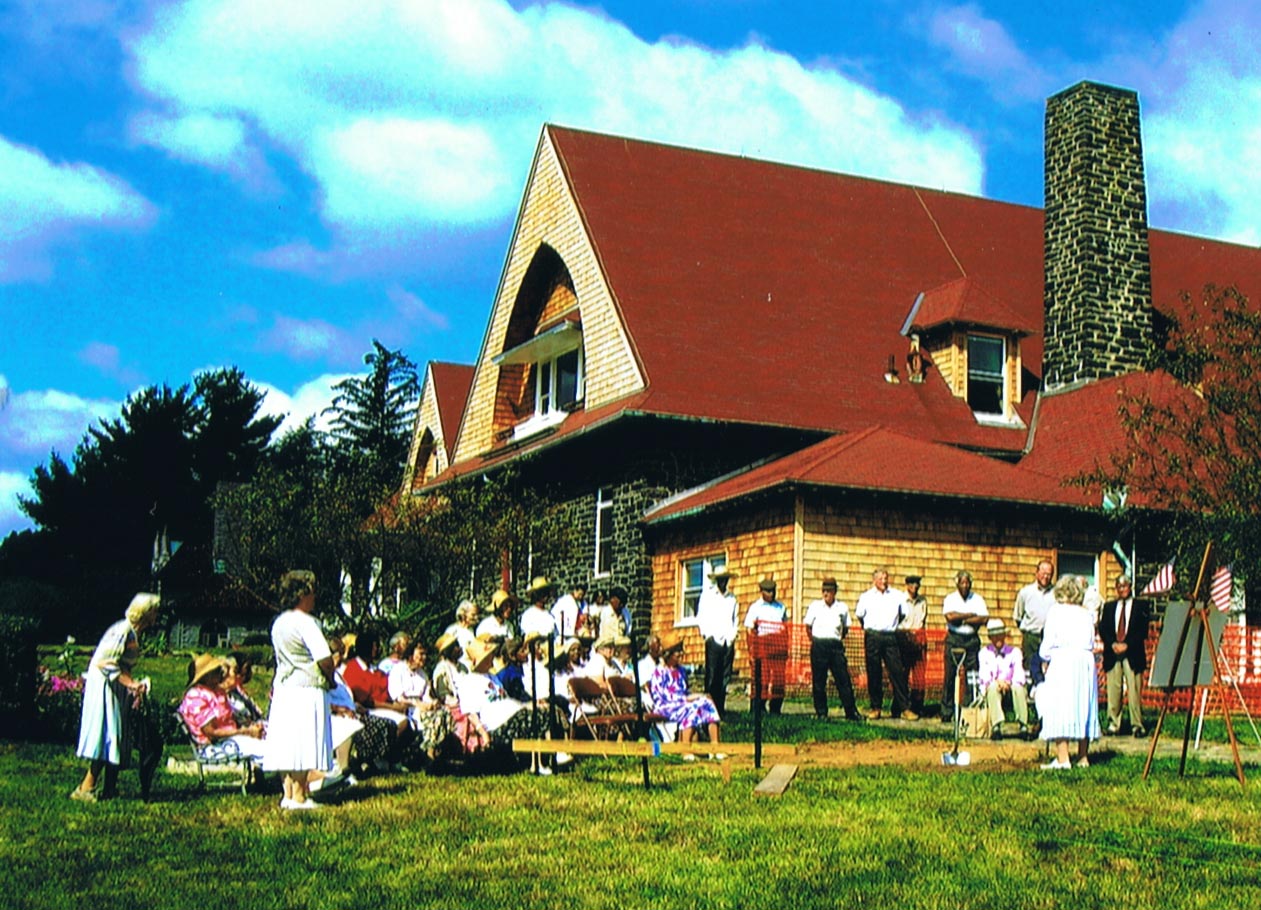 As they paused to view the drawings members of The Peace Mission and faithful followers gave beautiful testimonies of appreciation for FATHER DIVINE’S Library and thanking HIM for its coming into being.

Truly they spoke for all of us.

Thank YOU, FATHER and MOTHER DIVINE for this Wonderful occasion.

Note: Disclaimer: We did not get a complete recording of the service so there may be some discrepancies in this account but overall it portrays what took place.

Let it be said here that this Library will contain FATHER and MOTHER DIVINE’S Words of Spirit, Life and Truth. Many testimonials of followers and friends from all over the world will substantiate the great story of The Universal Peace Mission Movement and its universal family.

The Library/Museum will house the many Peace Mission artifacts of historical interest that we have acquired over the years. It will contain controlled environment areas for archival material such as movies, photos, wire recordings, tape recordings, digital recordings and printed material, etc.It will have a section to store and then display in rotation the artifacts and other material.

The Library will provide space and equipment for the use of those researching, studying or just learning about FATHER DIVINE’S Mission here on earth. This is an unparallel mission which FATHER declared is “to make all mankind conscious of GOD’S actual everpresence and thereby make this earth heaven in reality in fulfillment of scriptural prophesy”.

It will also provide the much needed space for the Audio/Visual Department to expand and better perform its activities.

Of course all of this will be available to the general public gratis.

Thank YOU, FATHER and MOTHER DIVINE.

GOD is a free gift to the world. Any and all of the material on this and other pages may be copied and reproduced.

Use the material freely but respect FATHER DIVINE’S intent, which was and is, to provide us all with the keys to eternal health and happiness without cost or price. HE truly came as a free gift to the world, gratis to mankind.

It is also nice to give credit where credit is due for through the Spirit and Teaching of FATHER and MOTHER DIVINE you are and can eternally be abundantly blessed.

From all of us to all of you. we wish you, peace and love, and many blessings, and may we all ever live in unity and brotherhood and the Consciousness of GOD’S Actual Ever Presence.

True Americanism, True Brotherhood, True Christianity, True Judaism and All True Religions are synonymous and truly Our GOD is One GOD. Amen

Thank you for visiting our page.

Thank YOU, FATHER and MOTHER DIVINE for allowing us to put this information on line.