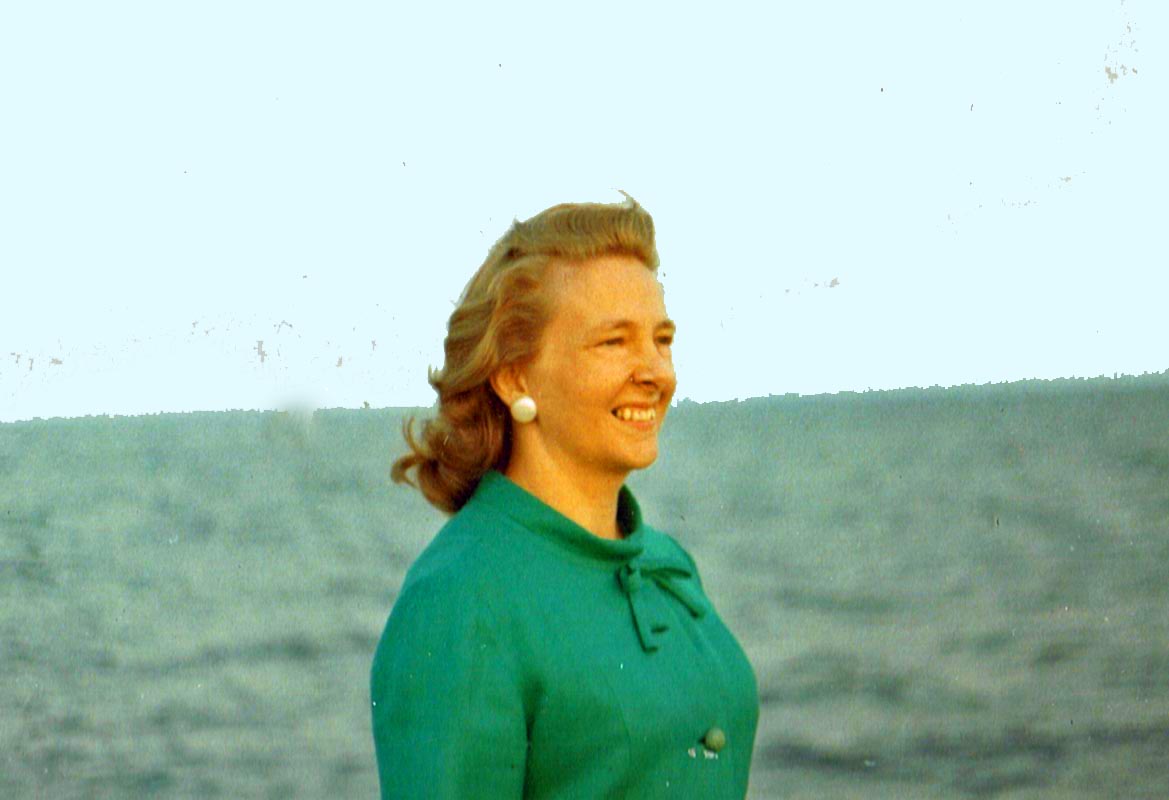 Many questions have been raised concerning FATHER DIVINE’S action in 1965, when HE laid His Body down.
MOTHER DIVINE unfolds the mystery of this action in the following excerpt
from an interview SHE gave to two college professors on August 26, 1971. MOTHER DIVINE speaks as follows:

‘Without seeing FATHER as a Person, HE’S just as Real! HE said HE would never let HIS Body stand in HIS way. HE knew that HIS Personal Body was a stumbling block to many, because GOD condescended to come in the valley of the nations – come to them in a way that they would least expect GOD to come. 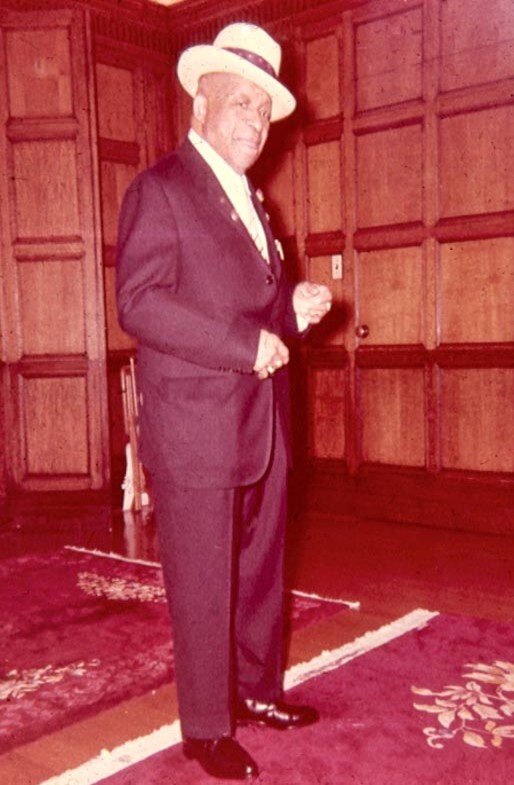 ‘He said that HE would throw off HIS Body and He would enter in, though the doors were shut! So HE’S entered in now. But HE also said, ‘After I have entered in, then I will put It on again, because no man has power to take MY Life; but I lay It down and I take It up again, and I will prove to them that a Spirit has not flesh and bones!’

‘But GOD is real! GOD is just as Real as you and I are Real! GOD has just as much right to have a Body as you and I have a right to have a body, because nothing is real unless it is tangible on the material plane. It is all a supposition. They have kept GOD in the spirit world long enough; they have kept HIM in the mental world; but GOD is going to be in the physical world! Isn’t that wonderful? HE’S taking HIS place in the physical world now, and the kingdoms of this world will be the Kingdom of our GOD and of HIS CHRIST!’

MOTHER DIVINE: ‘When I think of the Sacrifice FATHER has made – that is why we rest, because the Sacrifice has been made, because nothing is a reality until the sacrifice is made to make it real! You know, we had the Declaration of Independence and it was just on paper, but it was because of the lives that were willing to be sacrificed to make it a reality that we have independence today.

‘And that’s the same way with FATHER and the Peace Mission and HIS Principles of Righteousness – not just those in the Peace Mission, but everybody, every person who is willing to suffer to establish a Principle or for a cause of Righteousness. You see, the willingness to suffer makes that particular Principle a reality. Isn’t that wonderful? ‘And that’s why I know that with or without any of us, what FATHER stands for and what HE lives for and lived for and what HE sacrificed for, will be! Heaven and earth could pass away, but our GOD stands firm!’

Professor: ‘MOTHER, YOU referred to FATHER having sacrificed HIS Physical Body. In the usual sense, HIS Physical Body d – – d. Now I understand and believe that FATHER is with us, but do YOU feel the way some religious groups feel, that HE will return again in another Physical Form? For example, the Orthodox Jews still believe that the Redeemer has not yet come. If the Redeemer is to come, well, many Christian groups feel that CHRIST is the Redeemer. Do YOU feel that FATHER will come in another Physical Form – or would YOU care to give Your views on that?’

‘FATHER DIVINE, taking on what we call the ‘funeral expression,’ was only another degree of that Sacrifice. It all was for the redemption of man!

‘GOD, in reality, is without the beginning of days or the end of life. And GOD is not confined, and even the material world is not confined to what we see, because we see so limitedly. When we are lifted, we see a little more. Science bears record that there’s sound higher than what the physical ear can hear. So you can’t limit GOD, and GOD hasn’t gone anywhere! HE can’t go anywhere! HE IS! You understand this – GOD IS! It’s just an appearance of coming and going.

‘And the Power that FATHER DIVINE demonstrated! I mean, people can testify of that Power, especially when they saw people touch It inharmoniously. I mean, in those days in New York when there was so much hostility against FATHER – I mean it was demonstrated more – and like in Sayville when they were so hostile, you could actually see the electricity come out of FATHER’S Hands, and see FATHER bounce up like a ball! These are facts that many can testify to, so we know that FATHER DIVINE is just LIFE! just LIFE!

‘FATHER DIVINE is going to fulfill the Scripture from Genesis to Revelation, and the last enemy to be conquered is death! This terrible delusion that man has been under – that he is born and he must die – but that’s because he’s been under that curse, under the law of sin and death. And Jesus demonstrated the Victory over it when He submitted Himself to the Will of GOD – in other words, conformed Himself to the Spirit within Him until the Flesh became Spirit, you know, so that the grave couldn’t hold him! He overcame gravitation. And that is the privilege of everyone, for He was the first – born among many brethren.

‘FATHER DIVINE is the Lamb that was slain before the foundation of the world, and HE is the Sacrifice that has destroyed that concept of death. And HE consumed in HIS Body our iniquities; and if we can believe it, we should not have an ache and we should not have a pain if we harmonize with HIM and believe.

‘Now FATHER DIVINE said that when they see the GOD of all Creation, they see that Appearance. Now FATHER DIVINE would not be GOD if HE didn’t have the Victory over death – if HE couldn’t raise that Body – because if GOD is GOD, nothing is greater than GOD, and GOD cannot be limited! But whether HE will do it or not – that’s HIS Business. And to those of us who know FATHER DIVINE is GOD, that doesn’t say HE’S not GOD. It doesn’t add to it, and it doesn’t take from it! To us, HE’S Changeless Perfection!

‘But I will say this, HE came in a Body, and we can see HIM now if we attune ourselves to HIM. HE has a Body, you know, like I say – if you would raise your consciousness, you can see, and many do see FATHER.

‘I believe that the world is going to see FATHER DIVINE again but the main thing for ME and for everyone is to get the reality of HIS Ever Presence, because that’s what HE came to bring us – the Consciousness of HIS Ever Presence, as we heard in that Message today – what the Consciousness of GOD’S Ever Presence will do for us. It is the Key that will unlock the Heaven’s Door – just the recognition of GOD – because it sets in motion the creative forces of nature. So, without our seeing FATHER Personally, we must see HIM by living at all times in HIS Actual Presence. You understand?’

MOTHER DIVINE: ‘So it’s not a case of waiting like Christianity is waiting. You know, CHRIST would have appeared much sooner if they would have done what Jesus told them to do, you know? CHRIST did come – the Messiah did come to the Jews – but because they didn’t really prepare themselves, they didn’t know HIM when HE came! And just like FATHER DIVINE is the Second Coming of CHRIST; but Christianity is still waiting for Him. It’s a state of consciousness. FATHER DIVINE could come again and people wouldn’t know that HE came again, maybe, if they are not in a place to receive HIM! So it’s up to the individual. CHRIST is here and now! FATHER DIVINE IS GOD!