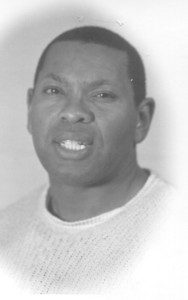 Pete Holmes was a heavyweight. Like many men who know they appear intimidating, he was the most courteous in his dealings with everyone and never sought the limelight. Although he had no official position, we all knew he was important, a mover and shaker among us. His self-possessed manner left no doubt of it.

He could act with alacrity when required, as I found out one service, as Jim was getting warmed up, early one Sunday at the pulpit. I was strolling my beat slowly down the center aisle in my A.G. (Apostolic Guardian) uniform, checking laps to make sure no one had an unauthorized pencil and paper, or tape recorder. Fifteen feet ahead of me a lady all in white, with bonnet, sprang up from her seat, made it to the aisle, and stormed towards the pulpit, shaking her fist and shouting defiantly at Jim. She was very tiny, dark-skinned, elderly and may have been wielding a white umbrella. Jim was rooted to the spot, just looking at her. I was fascinated, but did not quicken my pace and was waiting to see what Jim was going to do, when Peter Holmes barreled past me (he must have been in the back aisle, or maybe by the door), wrapped her up in his arms, and hustled her right out, joined by two other security guards at the door. No one ever said a word to me about my lapse, which should by all rights have gotten me on the floor, or at least busted from the AGs for good. In the next meeting, the greeter who let the lady in white in that day had to “pretend to” drop dead as punishment, and as a warning to all the greeters, for her not discerning the evil intentions of the new guest.

Pete’s jobs in Jonestown were to oversee the Seniors’ Garden; Team C Counselor; Band member (horns); Co-Supervisor, Herbal Kitchen; and Lab Technician – Pathology for the Health Dept., in fact, per Edith Roller’s 4/17/78 journal entry, “John Harris is establishing a pathology laboratory, intended to do all the lab work for different departments such as agriculture and medical.”

He went by John Harris in the Edith’s Journals, a name we had been calling him since about 1974 on Jim’s instruction. Brother, be it Pete or John, no doubt Gabriel wrested you from both of those saints, as a useful archangel for Gaia. You already blew a great trumpet. And were solid to the core. Always loved and remembered, rest in peace.

(Kathy [Tropp] Barbour joined Peoples Temple in 1970 with her companion, Richard Tropp, and was living in the San Francisco Temple on November 18, 1978. Her other articles in this edition of the jonestown report are biographical sketches on Patty Cartmell and Janet Tupper. Her earlier writings on this site can be found here.)