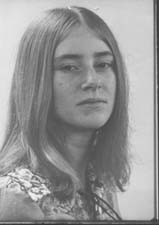 I remember well my first time meeting the Tupper family. I got a call one morning to go to an address and cook breakfast for some new arrivals. I found myself in a trailer park on the outskirts of Ukiah, and knocking on the door of the trailer, it opened, and I went in. I remember four of the five Tupper children – Ruth, Mary, Janet and Larry – being there, huddling in a tiny dark kitchen looking hushed and stricken, like a Keane painting, all eyes. I introduced myself, and looked for something to cook. The cupboards and refrigerator appeared to be devoid of food, but I finally found ingredients to make pancakes, and made syrup with brown sugar. There were no complaints. We talked a little, I tried to reassure them it would be fine now that they were here, that I looked forward to seeing them in service, if not before, and left.

Janet’s mother Rita was a staunch loyalist, and she and all her children (except Tim, being already a Jones) discarded “Tupper” for the last name “Lenin” in Jonestown. They may have started a trend, as there are also Guevaras, and one Stalin (Jimmy-Jo Cordell), but I don’t know the sequence of these changes to determine whether these instances were imitations of Tupper actions or were in response to other suggestion or initiative.

About all members of the family was an air of profound dislocation, that endeared them to us. They shared a raw – in Rita’s case, gritty – but honest and benign approach to others. The eyes of Ruth, Janet, and Larry held a haunting melancholy (which Mary’s bright smile and Tim’s cool may have masked) suggesting traumas of the past. I never knew their story, personal details were just that, but I marveled at their being 100% happy to be “with us” from the very beginning, ready to become one with the larger family in spirit from the time of their arrival. Janet, unforgettable by any name, unlike any other, rest in peace.

(Kathy [Tropp] Barbour joined Peoples Temple in 1970 with her companion, Richard Tropp, and was living in the San Francisco Temple on November 18, 1978. Her other articles in this edition of the jonestown report are biographical sketches on Patty Cartmell and Peter Holmes. Her earlier writings on this site can be found here.)