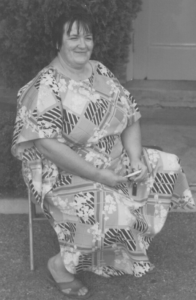 Patty was one of the longest-following members, but always figurative in the Temple and one person Jim Jones called “nearest to me in temperament.” She might look like one of the extraordinarily ordinary, but there were no chance encounters with Patty Cartmell (unless she wanted it that way). She could engage you instantly and get what she was after without you knowing she was after anything; she could tear you a new a**hole if your behavior outraged her enough. Any exchange was liable to etch itself into your memory and teach you something you hadn’t known about yourself. I can’t imagine anyone not being putty in her hands.

She kept the church going while Jim and Jack Beam and their families were in Brazil from 1962-63. I have many stories, but I will take one on the rebound from Harriet Tropp. In her first month in Redwood Valley, Harriet burst into the cabin and nailed me one day after returning from a conversation with Patty. “All right. Tell me. What the @%$#! is it about the 16th??” she demanded of me. “I told her I was born on the 16th and she just looked at me in horror. So tell me!! What does it mean?” I couldn’t, and if anyone out there knows (now), please inform me. But I filed it away in my brain, anyway. There was something about the 16th. Patty said it; just know it.

Patty’s rich territory was the ear of the Ida May Nicholses in attendance. I never saw her eat in services, she was with the seniors, talking to them as if she’d waited all her life for the opportunity. She and Sharon Amos and Carolyn Layton – but especially Patty – gleaning, I’d guess now, details to come out in healings over time as “revelations” from the pulpit. Patty was always in the background, except in skits, where she was uproariously funny.

As the church grew to its peak membership, she was seen less and less, grew morbidly obese, got her teeth wired (duly imitated by another half-dozen people who were also overweight). But it didn’t work for Patty, she slammed down enough milkshakes to negate the obstacle, I guess.

The last time I saw her, Patty thrust upon me my dog Tavara, the dear pet of a senior bound for Guyana (possibly Lovie Jean Lucas). She accosted me outside the back door shouting urgent, hoarse, frantic orders I don’t recall, but in essence “make sure this dog has everything she needs or will ever want in life. Treat her like a queen. Keep her free from all harm…” (her oath to whoever had to surrender their dog, I guessed). It was all over in less than a minute, and I never saw her again. She’s in heaven all right. Just don’t make her come down here!!

(Kathy [Tropp] Barbour joined Peoples Temple in 1970 with her companion, Richard Tropp, and was living in the San Francisco Temple on November 18, 1978. Her other articles in this edition of the jonestown report are biographical sketches on Peter Holmes and Janet Tupper. Her earlier writings on this site can be found here.)