I didn’t really begin to get acquainted with Vernon until we started working on petitioning President Bill Clinton for a commutation of sentence for Larry Layton, my former brother in-law. When that failed, we launched a campaign for Larry’s parole, and Vernon’s role in that second, successful effort was pivotal. Without his testimony before the parole board urging the release of the man who shot him at the Port Kaituma airstrip on November 18, Larry would have spent another five years in prison. 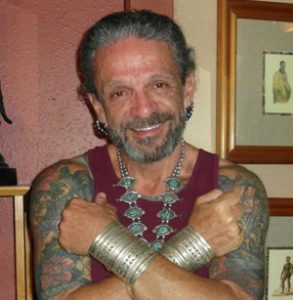 Vernon struck me the first time I met him, and every time we met subsequently, as a kind-hearted, gentle person. I’m sure he had a wild side—all those tattoos!!—but I never saw that part of him.

I recall seeing him at some survivor reunions once or twice, and of course he was always warm and cordial. We would discuss Peoples Temple, the loss of his wife and child, but never the events of November 18. He disagreed with us on several things, but was able to do so and remain a friend. I remember watching the play about Jonestown by Leigh Fondakowski and being shocked to learn of the callousness of the medical staff when his first wife, a person of color, went into a vegetative state due to an overdose of anesthesia.

But the most memorable occasion was when he was attending a conference in San Diego and we had him all to ourselves, so to speak. After he came over to dinner, we visited him in his room at the Town and Country Hotel. He had decked it out in Buddhist items, so it was not just a motel room but a meditation chamber and a peaceful place.

When I gave a sermon via Zoom at the Unitarian Fellowship in Indianapolis in 2021, I used Vernon’s poem “My Journey to the Crone/Elder” to close the service. The poem begins, “My suffering became freedom / My loss became compassion.” Vernon was able to turn disaster into triumph through honesty, kindness, and joy.

He truly found a peace that he was able to share with all of us. He is deeply missed.

(Editor’s note: Rebecca Moore is Professor Emerita of Religious Studies at San Diego State University. She has written and published extensively on Peoples Temple and Jonestown. Rebecca is also the co-manager of this website. Her other articles in this edition of the jonestown report are George Donald Beck; A Monumental Problem: Memorializing the Jonestown Dead; InTOXICating Followership: A Review; and Spreadsheet Offers Downloadable Demographic Tool for Researchers. Her collection of articles on this site may be found here. She may be reached at remoore@sdsu.edu.)