(Eugene Smith is the author the memoir Back to the World. His other article in this year’s edition of the jonestown report is Night… His previous articles may be found here. He can be reached through this website.)

I was born (a second time) on November 21st, 1978. That was the day I found out that, all that was, was no more. It was my hope and desire to never feel that way again. These last (2) years have been Dante’s Hell, for me and other survivors. That feeling of loss combined with the fact that hundreds of thousands of humans were dying and would continue to die.

The isolation was very familiar to me. It was the same as when I returned to the States in 1978. I had no disease, but – as a victim of “Jonestown” – I was treated as though I carried a virulent contagion. More insulting, some folks treated those who survived just as guilty as the instigator-in-charge. My name was public. I was being followed. And what was worse, to be monitored openly, or to be monitored discreetly? 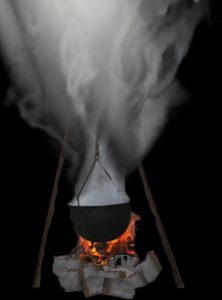 1979: I feel uncomfortable going outside (someone might recognize me).

2021: I feel uncomfortable going outside (I forgot my mask, I might be in danger).

1979: I see images of the bodies of Jonestown on TV every day for the first six months after being back stateside.

2021: I see images of the bodies of Covid-19 victims on TV every day for the first six months.

1979: A year later and Jonestown is still in the news, even if it’s passé. Folks have desensitized and somewhat acclimated. We survivors haven’t. We’ve been labeled – nuts, kooks, nitwits, programmed, brainwashed – and some of those labels have never been removed.

2021: A year later and segment of the populace still doesn’t believe Covid-19 is a danger. There are folks out there that say it’s fake,  it’s a government experiment, that those who us who believe it’s real have been brainwashed.

What is the connection? Why the feeling of impending doom? Why the hypervigilance? Why are we feeling this way?  What is the trigger? Why do I have that feeling…

How can I feel any other way?

In 1978, there was this charismatic leader you may have heard about. Somewhat influential. Egotistical, megalomaniac, delusional, maniacal, cunning, manipulative, in a position of authority. He says he is all you need, that America is corrupt, that there are hidden forces controlling everything, that he is the only one who can offer protection to his followers.

In 2016, there was this charismatic leader you may have heard about. Somewhat influential. Somewhat influential. Egotistical, megalomaniac, ultra-delusional, downright maniacal, cunning, naturally manipulative, in a position of authority. He says he is all you need, that America is corrupt, that there are hidden forces controlling everything, that he is the only one who can offer protection to his followers.

The reality is, Donald Trump is everything Jim Jones wanted to be, and has succeeded on an even grander scale. In this case – and maybe only in this case – he undersells himself. More than 700,000 dead, and in the past few months – now that there is something we can do about it, unless you’re in his orbit – most are innocent people dying out of belief, ignorance, bravado, and in some cases just because.

Tell me where I’m wrong.