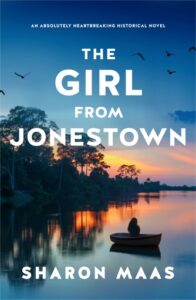 A Guyanese writer who began working on a novel about Jonestown more than a decade ago has finally found success with the publication of The Girl from Jonestown.

Sharon Maas, who has numerous other novels based in her native country, first wrote about her Jonestown novel – then titled White Night – in 2011. As she wrote then:

Ever since [1978], the tragedy has haunted me, and it’s no wonder that after my first few novels were published I decided to take on Jim Jones and his reign of fear. The result was my-as-yet unpublished novel, White Night. My goal in this undertaking was not to simply dramatise the events as they really happened. I wanted this book to be a voyage of discovery, for me as a writer and for my readers, and so the perspective in the book is that of an outsider…

As I researched the background to the Jonestown disaster, I explored the behind-the-scenes story behind the shocking headlines. I learned that this was not the bunch of lunatics as the media would have us believe, but instead a group of ordinary people just as idealistic as I and my friends had been, trapped in a prison from which there was no escape, manipulated by fear and controlled by psycho-terror beyond imagination.

Published in June 2022, the book has already received scores of reviews on Amazon in five months. They include highly-rated reviews from Bonnie DeMoss, Elise Prins-Kleukens, and a 49-year-old British blogger named Sam.

A review by Laura Elizabeth Woollett – herself a novelist and regular contributor to the jonestown report – appears here.