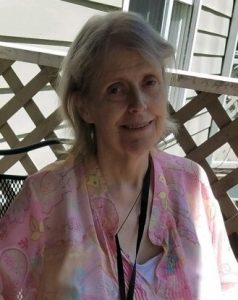 One constant in the life of Teri O’Shea was her love for poetry. She began writing poetry herself at age seven, calling the local public library to ask where she could get a “poetic license.” Poets who influenced her include James Agee, Audre Lorde, Fay Chiang, and Philip Levine.

Teri earned her B.A. in Journalism from the University of California at Berkeley. While in college, she joined Peoples Temple, drawn in by her youthful idealism and vision of a better society. She was in the Temple for seven years until her defection three weeks before the massacre.

Teri’s work explored the aftermath of survival: guilt, fear, grief, forgiveness, and the constant search for meaning and new beginnings. She found inspiration in the lives of other survivors, whether they have survived war, the Holocaust, abuse, cancer, chronic illness or other life-altering experiences. Her poetry moved beyond survival to express the universality and complexity of human experience.

“Drinking the Kool-Aid: A Survivor Remembers Jim Jones” is a 2011 interview with Teri in The Atlantic.

Teri’s daughter, Vita Thais O’Shea, contributed the article, An introduction to my mother (2009). She also prepared a tribute to her mother for Mother’s Day for 2009 on YouTube.