After spending 18 years in Guyana jails and U.S. federal prisons, Larry Layton, the only man convicted on criminal charges arising from the events of November 18, 1978, was released in April 2002. Larry’s parole came two years earlier than his previously-scheduled release date of April 2004.

The early release culminated a six-year campaign during which members of his family worked with a core of supporters, first to petition then-President Clinton to commute Larry’s sentence, then to convince the Parole Commission to modify its earlier decision on a release date.

Three witnesses appeared on Larry’s behalf before a parole hearing at the federal prison at Lompoc, California, including attorney Frank Bell and Loren Buddress, the former Chief Probation Office for the Northern District of California. But it was the testimony of Vern Gosney, one of Larry’s shooting victims at the Port Kaituma airstrip, who traveled from Hawaii for the sole purpose of attending the hearing and who delivered the most impassioned plea for Larry’s release, that apparently made the difference.

The parole examiner said he was “deeply troubled” that Larry had remained in prison for so long — well in excess of the five years recommended by the sentencing judge — and noted Larry’s exemplary behavior while in federal custody.

Larry shot and wounded two people at the Port Kaituma airstrip on 18 November 1978, and he attempted to shoot a third. The shootings took place on one of the airplanes which were to take the party of Congressman Leo Ryan to Georgetown after his visit to Jonestown. 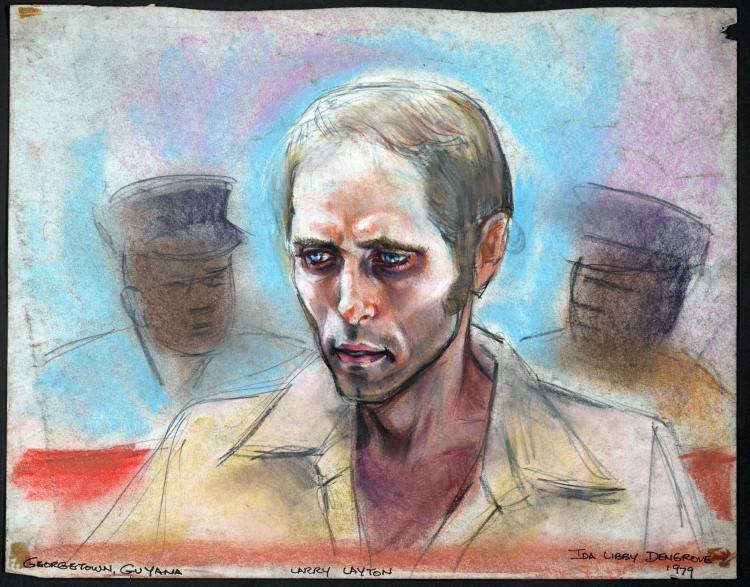 Extradited to the U.S. after a Guyana jury found him not guilty of murder, Larry was tried twice on four charges related to the shootings, including Conspiracy to Kill a Congressman. The first trial ended in a hung jury. A second jury convicted Larry, although four jurors took what the trial judge called an “unprecedented” step of asking for leniency in Larry’s sentencing. Nevertheless, in 1991, a parole board ruled that Larry would have to serve 20 years, and set his release date for 2006. That date was later moved back to April 2004, after the board credited him for his time in the Georgetown jail.

The docket for Layton’s trial through its various appeals through 1990 is here.

In 1996, the family and friends of Larry launched a campaign for a presidential commutation. The petition for commutation filed with the Pardon Attorney in 1997 included 87 letters of support from former members of Peoples Temple, relatives of people who died in Jonestown, former prisoners and prison officials who knew Larry, scholars of religious studies and new religious movements, and members of the clergy. In the weeks leading up to the White House decision on the petition, a number of former congressmen and religious leaders — including Rev. Philip Wogaman, President and Mrs. Clinton’s pastor in Washington, D.C. — made additional pleas for commutation of Larry’s sentence. The campaign succeeded in making it to the Oval Office, and seemed to be viable up until 20 January 2001, President Clinton’s last day in office, but Larry’s name did not appear on the final list of pardons and commutations.

Initially discouraged, Larry’s family pressed ahead with the petition for early release, collecting another 50 letters in support, including letters from former Temple members and critics, numerous religious leaders, and a former congressman. The letters were presented during the hearing which resulted in a recommendation for Larry’s release.