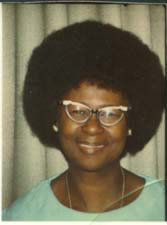 Many years ago, when I wrote Remembering Lexie Smith Davis, my first piece about the impact of the Jonestown tragedy on my family, it was deeply personal. My feelings were raw as I “went there” emotionally to try to make sense of the tiny pieces of information that I had about my Aunt Lexie. Writing about her life was painful, but the pain was therapeutic. It removed the pretense that it didn’t hurt or that it didn’t personally affect me. That piece helped me deal with my aunt’s tragic death, my family’s (particularly my mom’s) deep sorrow, many regrets, and embarrassment.

My daughter, who is also named Lexie, was too young to remember when Aunt Lexie left the States for Guyana. My sister, who also has the same name, does remember her and could have been persuaded to go to Guyana, were it not for my mother’s prayers and her spiritual discernment. She certainly had the opportunity. Aunt Lexie had sent my sister a bus ticket to visit her in Los Angeles from our home in Texas. But after observing Aunt Lexie report for guard duty in the middle of the night, sister Lexie found a way to leave my aunt and the influence of Peoples Temple. Had she stayed in Los Angeles, she might have been seduced and drawn into the clutches of Jim Jones.

I also had an “opportunity” to join Peoples Temple when I visited Auntie just before she left for Guyana. She gave me some of her personal items, including pictures and a shadow box, while trying to “pitch” or sell me on Peoples Temple. I tried to persuade her not to go.

Since that fateful day, my sister and I seldom talk about our shared experiences. Writing the first article relieved me of the loneliness of wanting to speak her name.

I now feel the responsibility of sounding an alarm that today’s environment is like the climate that birthed, incubated, and nurtured Jim Jones. As we did in the years of the Temple’s existence, we are seeing a real or perceived racial divide; tremendous differences in incomes for the 99% versus the 1%; the lessening importance of marriage; the challenges to long-held moral compasses; and the failure of the American church to help solve the social issues plaguing our country. History can provide warnings for us – that’s one reason we study it – and we must extrapolate the lessons of Jonestown and project what can happen today if we continue to foster this toxic environment. Failure to heed warnings might result in greater tragedies on both personal and national scales.

These are some of the similarities I see in the social and political climates from Jonestown and today:

Jim Jones founded Peoples Temple as an alternative religion in the 1950s in the Midwest and moved to California in the 1960s. They were turbulent times, with social issues like the Vietnam War, Civil Rights struggles, the Sexual Revolution, and drug experimentations, being at the forefront of the national debate. College campuses were especially active, with sit-ins, marches, protests, experiments with drugs, and pushing of sexual boundaries. Jim Jones’ message of brotherly love across racial, social and cultural strata resonated with those who felt left out or disenfranchised. Today we would call them members of the 99%. In California, Jones was well connected with political figures such as Rosalynn Carter, the wife of President Jimmy Carter; San Francisco Supervisor Harvey Milk; San Francisco Mayor George Moscone; future Congresswoman Nancy Pelosi; Assemblyman – and eventual San Francisco Mayor – Willie Brown; San Francisco Supervisor – and soon to be San Francisco Mayor and eventual U.S. Senator – Dianne Feinstein and many others.[1]

My family and many others had become concerned about the Temple in 1977 after hearing rumors of abuse including beatings. Many news stories about the abuse were suppressed until an article appeared in New West Magazine. As jonestown report contributor Gabrielle Greenfield wrote:

The New West article discussed Jones’ rise to political influence, the Temple’s catharsis meetings, the faked healings, practice of punishment, sexual assault and Jones’ misleading financial operations. This information, true as it was, was enough for Jones’ clean media presence in San Francisco, to be blown for good.[2]

Before the New West piece was published, Jim Jones’ influence was enough to kill other articles. Again, as Gabrielle Greenville wrote:

Jim Jones was the perfect asset to San Francisco’s liberal establishment. He donated to charities, promoted racial equality and could raise large crowds for any political event. Politicians loved him. Over 20,000 people had attended Temple services over the years. Jones brought crowds, money, and votes, and yet, as a man, he remained a mystery. He seemed to be doing great things for the city, but no one knew who he was, where he came from, and what his intentions were.[3]

The New West exposé ultimately led to Jones’ (and my aunt) to flee to Guyana in the summer of 1977, where Socialism could be practiced in a Socialist country without the scrutiny of the press.

In Jonestown, residents received free medical and dental care. There was communal dining. Children were cared for in the free schools. Everyone – the rich and poor, professionals and common laborers, the 75% Black and 22% White residents – was assigned and guaranteed work.   Members turned over everything they owned. Because of her age, my Aunt Lexie had little to offer other than her Social Security check and her work ethic, but even that contributed to the hundreds of thousands of dollars in Social Security benefits which hundreds of Black seniors turned over to support the building of Jonestown. There were other members who offered much more: money, real estate, professional skills and management abilities.  Socialist forces that created and sacrificed for the common good replaced forces that drove innovation and creativity under capitalism in America. Cooperation and association weren’t just encouraged but were forced. Any (non-sanctioned) racism, misogyny, or rebellion was swiftly punished, but that did not necessarily mean that hearts were changed. The practice of Socialism in Jonestown was different from the ideals that were preached, and the presence of racism within Jonestown has been well-documented.

The veneer of equality hid a pernicious race and gender hierarchy in which the Temple’s vaunted inner circle was comprised of white women who were fatally loyal to Jones and his perverse will. This tight knit cadre of white women was Jones’ brain trust, acting as his psychological henchwomen and enforcers, handling Temple funds, intimidating potential defectors, and seducing VIPs out of political expediency.[5]

It also destroyed the boundaries that protect marriages and family life:

Both men and women were routinely beaten, coerced into having sex with Jones in private and with other people in public. Husbands and wives were forbidden to have sex with each other but were forced to join other members in watching their spouses being sexually humiliated and abused. To prove that he wasn’t a racist, a white man was coerced into having oral sex in front of a gathering of members with a black woman who was having her period. Another man was made to remove all his clothes, bend over and spread his legs before the congregation while being examined for signs of venereal disease.[7]

Jones also managed the sexual relations of couples and sometimes engaged in both heterosexual and homosexual sex with either partner. The traditional understanding of marriage is that it is a covenant relationship in which two parties agree to be faithful to each other, reserving sexual activity for the marriage partner. Jim Jones became the third person in this covenant relationship, thus changing the meaning of being a husband and wife.

Socialism – the more palatable version being peddled by young “Democratic Socialists” – is growing in influence in mainstream America. Increasing numbers of Black and Brown people are attracted to the message of a “classless society” in which the influence of the 1% (who are mostly White men) is eliminated.  American Socialists have as a goal the elimination of the private ownership of key business enterprises to finance the benefits below, which, if anything, underestimate the total costs.

Today, groups like Antifa, Democratic Socialists of America, Black Socialists and others are growing as young people are attracted to the message of equality of outcome, not just equality of opportunity. They demand housing as a “right,” Medicare for all, and government takeover of industries. These groups see few benefits in a capitalist society while ignoring the lessons that should be learned from socialist countries like Venezuela, Cuba, Greece, and North Korea.

Social justice was practically achieved in Jonestown, but at what price? It required that the assets of the rich would be taken. The status of the poor was upgraded, but at a significant price. The reward and personal pride of effort, acquired knowledge, wisdom, and work was lost.  Jim Jones’ brand of Socialism required a charismatic leader; unbridled devotion to the idea of classlessness; the forsaking of nuclear family values; and the disparagement of authentically Christian beliefs.

My aunt and other mostly African American women exchanged their roles as legacy builders for membership in the Jonestown classless society. Because of that decision, their memories are wiped out, save for the efforts of any family members who speak of them. But what if the aspiration for an improved – if not classless – society had been fought for by these strong mothers, first working inside their homes then working for change without? What if they had banded together for the great purpose of self and family improvement, then improvement of others? What if they had discovered their own purpose with the added safety net of spiritual discernment and anchored hope? What if these mothers had stopped looking for a flawed White Socialist to save them, but rather stoked their creativity within? That creativity is best unleashed in capitalist countries.  If others can become inventors and business creators, why not more Black people, including Black women? What if Black women in particular took steps to reduce female-headed households; the numbers of babies birthed to single women; and the numbers of abortions? Statistics show the issues African Americans can and should address ourselves.

29% of African Americans were married
48% of all Americans.

50% of African Americans have never been married
33% of all Americans.

What if more Black people coordinated and associated with each other as they worked on business enterprises, social or community issues, on becoming job creators and entrepreneurs not just consumers?

The Power of Business Ownership[9]

It will take focus, self-discipline and hard work to address issues in our communities. However, building businesses or being focused on developing skills is a much better alternative than allowing Black self-destruction. And what if rich Black Americans joined willingly with fiercely focused Black women (and others) to establish job-creating businesses? What if all Americans began to speak of, write about, and live out a shared vision of America in which citizens possessed a clear understanding of history – including its injustices – and a healthy respect, but not worship, of racial identities? What if all of us, including the Black community, believed in freedom to again create while living in an economic system that nurtured that gift, instead of one that crushed it or regimented it under a charismatic leader like Jim Jones?

[1] The Jonestown Guyana Tragedy No One Wants to Talk About: A Case Study in How False Christianity and Politics Destroyed Many Lives

(Dorothy Brooks’ previous articles for the jonestown report appear here. She can be reached at dlbrooks9@verizon.net.)