I have come to terms with Jonestown as an integral part of my whole being. Every November it takes over my mind, body and soul, causing sorrow and regret to rip my family into nightmarish hell. I am never comfortable with television images about the beginning or ending of Peoples Temple. The name still sends shivers of fear down my spine. However, what I am unable to complete is my research for her through countless hours of audiotape, video footage, and images, including those of the final day. Why? I am still looking for the proof that she really is gone. 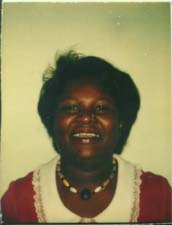 Macabre? Possibly, but inside this middle-aged woman remains a young girl missing her aunt, Mary Pearl Willis. I have seen her passport and church identification photographs, but that’s all. There was no autopsy, identification was made through dental charts (how accurate can that be with so little manpower to review the records of so many people?), and her casket was sealed. No one can definitely say they have seen her since she left for South America. I have asked the million-dollar question of every survivor I’ve met – “Do you remember my aunt?” – and never get more than a “Yes” with a smile or laugh. Is that good or bad? Whatever it is, it’s not enough. And so my search for her – a glimpse of her face, a few words recorded on tape – that’s all that can be done.

But would even that suffice? Maybe – how many times have I wondered – she escaped into the jungle. Does she have amnesia? Did she change her identity and is still too afraid to contact us? So many scenarios live within me. My heart swells with conflicted feelings of excitement and sadness, whenever brand new footage surfaces with the new hope of finally catching a glimpse of her. So far, though, nothing.

This torturous mind game has played ping pong in my head all these years. Why is there nothing of her in Jonestown, no pictures, no writings, no one’s memories of her? Her role could not have been so insignificant that nothing can be shared. Is it possible that her pain from all the forms of punishment previously acknowledged is so intense that everyone is protecting me?

Forty years, 14,600 days of looking. In the first footage from the airstrip, I believed I saw her trying to escape. When the names of people fleeing into the jungle were released, I knew she had to be among them. The handful of Jonestown survivors who hid during the deaths, yes, that’s it, she was one of them. And look at all the survivors in Georgetown, surely she was one of them. And if she wasn’t, that only means she must have slipped out the back of Lamaha Gardens in the confusion and melted into the city surrounding her. In the dark jungle or urban sprawl, I knew she was out there, still running for her life!

After sorting through the records of the Jonestown Institute, I learned my aunt was assigned to the nursery and workshop. That proves it. If she was there, she would have protected the babies. I listen to the death tape again, hoping to hear her defiance on behalf of the children. If she did die, she must have gone down fighting; they undoubtedly had to inject her with the poison.

I remember a number of years ago, speaking with Odell Rhodes, one of the few survivors who witnessed the horrors. “There is so much more than what is written,” he told me. I let him talk without asking questions – I was quite grateful for his willingness to share with me what he did, and respected him enough not to press him – but the name Mary Pearl Willis did not pass his lips.

My logical thinking tells me she is gone, even as the lack of information regarding her time in Jonestown continues to haunt me. She was – she is – bigger than life in my world, the possibility for her to go unnoticed by everyone else down there is guttering. The tragedy of her death isn’t completely matched by the anonymity of her last years, but almost. 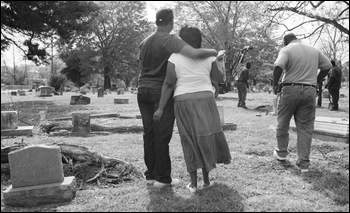 This will be my cross to bear, and so it shall be all my life. I have located the grave of Mary Pearl Willis at the cemetery in her hometown of Monroe, Louisiana, and erected a new headstone that names her, but so far I have found nothing else. So far.

(Lela Howard’s complete set of writings for this site appears here. She  can be reached at lelavhoward@gmail.com.)