(A Scientologist for 44 years and veteran investigative journalist and author, Tom Whittle has received numerous awards for reporting and editorial excellence. This article was originally published on the STAND (Scientologists Taking Action Against Discrimination) website on August 13, 2018 and is reprinted with permission. If you have information relevant to this article, the author would like to hear from you. You can email him at STANDLeague.org or send hard copy information to STAND, 1626 N. Wilcox Avenue #715, Los Angeles, CA 90028. Identities will be protected on request.)

After publishing an article about the Jonestown tragedy in 1995, I received a letter from a man who identified himself as an Army veteran whose military service had included time in Panama. His name was Charles Huff.

Huff said he had been among the first American soldiers to arrive at Jonestown after the tragedy. An excerpt from his original letter follows:

“We saw many bullet wounds as well as wounds from crossbow arrows. There were injection marks between the shoulder blades of adults and in the tongues of small children.” 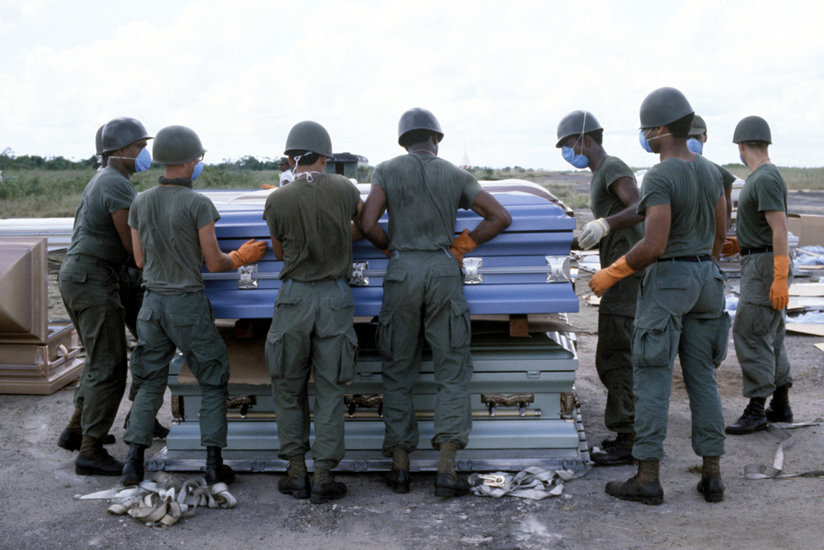 His words, if true, cut to the heart of the Jonestown tragedy and raise questions quite in addition to those already posed in this series.

The first sentence presents the specter of individuals so inured to killing that they would shoot innocent people fleeing for their lives. As he later told me, those struck down by bullets or arrows—at least 30 people—had been shot in the back as they were running away, toward the jungle that surrounded the settlement.

The second sentence corroborates the testimony of Dr. C. Leslie Mootoo, Guyana’s chief medical examiner, who noted that bodies he examined had died by injection. (See “Part Two: Three Cheers After the Tragedy from ‘A Lot of People’—Who Were They?”)

In telephone conversations in March and April of 1995, Huff expanded upon what had been outlined in the letter, describing how his team departed from Panama in a C-130 cargo plane, landed in Georgetown, Guyana’s capital and largest city, and pushed on to Jonestown, where they remained for 30 days.

Jonestown “looked like a massacre” had taken place, he said: “A coordinated guerrilla massacre.”

“We were used to village massacres,” he added. “People are rounded up, massacred,” noting that among members of his team the fact that a massacre had taken place “was our consensus.”

Huff compared the site to some of the mass killings during the then-recent genocide in Rwanda, where in 1994 hundreds of thousands of men, women and children had been rounded up and slaughtered. 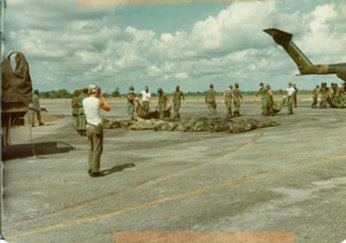 In a unit filled with hardened veterans, death is part of life. But as tough as they were, members of his team found it “hard to talk about this one,” he said.

Indeed, he added, after they returned home and saw their own children, “Some guys kind of snapped.”

Another person who arrived in Jonestown shortly after the tragedy, Tim Carter, also described injections. In two lengthy conversations in 2017, we discussed and he corroborated much of what he had already stated in other forums, although he declined to answer further questions on the record.

As has been widely reported by many sources, Tim Carter and his brother, Mike, left Jonestown on November 18 and then returned to the settlement on November 20 to help identify bodies.

Not widely reported, however, is what Carter stated in a January 21, 2015, article on the website, Alternative Considerations of Jonestown & Peoples Temple, sponsored by San Diego State University. He wrote, “I assert that the vast majority of those who died in Jonestown that day were murdered. … This is a historical fact that no documentary or film has yet chosen to discuss or even portray. In every interview I’ve ever given, I’ve spoken about the bodies that I personally saw with abscesses. And yet, that fact is never reported.”

In that article, he went on to ask one of the many troubling questions that loom over the tragedy: “Could it be that this reality is left out of media portrayals because it doesn’t fit neatly into the ‘mass suicide’ argument?”

His narrative on the SDSU site continues: “While attempting to identify bodies, I viewed many (at least two dozen) that had huge protruding abscesses. I stayed in a very self-proscribed area within the pavilion itself, as I refused to identify bodies in any other location.…

“The location of these injections was haphazard and varied…. I personally saw abscesses on a left temple, neck, back of hand, upper arm, lower leg, cheek, and back of shoulder.”

Acknowledging that the Guyanese medical examiner, Dr. Mootoo, had stated the bodies he examined had been injected between the shoulder blades, Carter said, “I believe Dr. Mootoo was describing the bodies found in the ‘dorm’ where … older seniors lived.”

Noting that a National Geographic Channel documentary had asserted, “the adults were ready to die,” he wrote, “I’m sure those that were forcibly injected with poison would be aghast and shocked to hear that they were ‘ready to die,’ and that their struggle to live has instead become an icon for meekly surrendering.”

If what Tim Carter, Charles Huff and Dr. C. Leslie Mootoo have stated is true, the Jonestown tragedy must be reassessed. Their remarks came from personal observations made at the scene, shortly after the tragedy had taken place.

My conversations with Tim Carter, as noted, were in 2017. As reported in a previous article, my interviews with Dr. Mootoo began roughly a year after the tragedy and continued, with the last conversation not long before his death in 2000. Although I sought to contact Charles Huff for any additional comments for this article, I was unable to do so.

Was Jonestown one of the worst massacres of innocent American men, women and children in history? What purpose could the deaths of so many people have served? Could an external force have been responsible? If so, who might it have been? 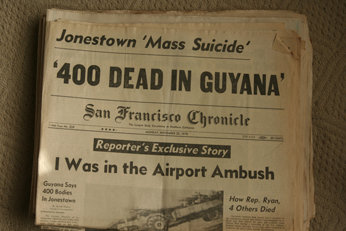 In his original letter, Charles Huff wrote, “As a veteran of Vietnam, Nicaragua, El Salvador, the invasion of Panama, the Persian Gulf and Somalia, I have never been more affected than the Jonestown murders.”

Huff speculated that the killers—“a maximum of 30 based on trails we found”—could have followed a path to a nearby river and escaped via dugout or boat, possibly carrying some of the cash they found in the settlement.

Getting away would have been “real simple,” he said.

As noted in a previous article, Peoples Temple member Stanley Clayton, who left Jonestown as the tragedy began to unfold, crept back to retrieve personal items. He hid quietly in the undergrowth. Then, after a profound silence of 30 to 45 minutes, he heard a loud chorus of three cheers. “It sounded like a lot of people. It was just a lot of voices,” The New York Times and the San Francisco Chronicle reported Clayton telling a Guyanese jury probing the deaths in December 1978.

To this date, no one has provided a satisfactory explanation for the source of the cheering. Could it have been the team—“a maximum of 30”—described by Charles Huff?