The Department of Special Collections at San Diego State University has digitized nearly 2,000 items from its collections documenting Peoples Temple, Jonestown, and the family of Rev. Jim Jones. While most of the items consist of photographs, the digital project also includes manuscript material, correspondence, illustrations, etc. Online access to the photographs has enabled those familiar with the content of materials to assist Special Collections by providing both identification and descriptive information of individuals.

Copies of the photographs and other materials from the collections are being made available to film and TV producers – including most recently, Sundance TV and ABC News – for special documentaries appearing later in 2018 commemorating the 40thyear since the Jonestown tragedy.

The Peoples Temple Digital Collection consists largely of photographs, although there are several audiotape recordings, tape transcripts and summaries as well. Nearly 1,200 online photographs have been separated into several sub-series, which can be used to facilitate search and discovery. The sub-series include:

Peoples Temple photographs from the early to mid-1970s, which mainly depict daily life within the church;

The Federal Bureau of Investigation sub-series, which includes photographs taken during the FBI’s investigation into Jonestown following the tragedy of November 18, 1978;

Photographs taken during Jonestown’s zenith from 1976 to 1978, which were later recovered at the site of the tragedy by the FBI; and

The Moore Family Photographs, which include photographs taken during both John and Barbara Moore’s visit to Jonestown in May 1978 and Rebecca Moore and Fielding McGehee’s visit in May 1979.

Of particular note are two intact, original photo albums of snapshots of the Rev. Jim Jones and his family and the activities of Peoples Temple – one titled / labeled “Healings” and the other titled “Father and animals, Father and children, Political People, Enemies, Other Speakers.” Gifted to the Jonestown Institute by Stephan Jones, the two albums form much of the photos comprising the Peoples Temple sub-series described above.

The digital collection includes audiotape recordings, transcripts, and summaries prepared by Fielding M. McGehee III and the Jonestown Institute. These are copies of the nearly 900 digitized recordings, transcripts and summaries already accessible via the Audiovisual Series of the Special Collections Finding Aid for the Peoples Temple Collection at SDSU.

The Jones Family Memorabilia Collection contains nearly 600 photographs, illustrations, documents, and letters. Most of the items are photographs, taken from the mid-1960s up to 2002, with the bulk of the images depicting life within Peoples Temple during the late 1960s and early 1970s. 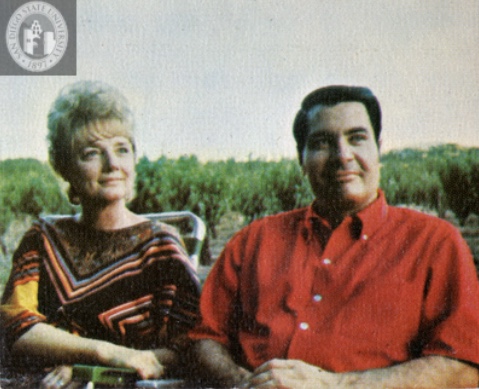 Noteworthy are a large number of photographs showing Jim Jones preaching, as well as several photographs of him with his wife, Marceline Jones, and several of him with his adopted children (mainly his sons). The majority of the photographs were taken in California at various Peoples Temple locations, including the Redwood Valley Peoples Temple Christian Church and Youth Center, Peoples Temple Los Angeles, and Benjamin Franklin Junior High School in San Francisco, which seated over 1000 people, and at which the church held services in the early 1970s. Additionally, there are many photographs from Peoples Temple bus trips, including the cross-country “Caravan of Hope” tour in the summer of 1974. Non-photographic items in the collection include – but are not limited to – Stephan Jones’s childhood drawings, grade school report cards, and elementary school assignments, as well as two letters addressed to Stephan Jones: one from his mother, Marceline Jones; and one from his paternal grandmother, Lynetta Putnam Jones.