I didn’t wear a suit to Tim’s memorial service.

I do have a suit, the same suit I’ve worn to weddings and funerals for nearly 30 years. But it’s also the suit that Tim grieved me about more than once, because he was bright, super intelligent, funny, empathetic, and irreverent as hell, which, of course, as anyone who knew him would tell you, meant that he had highly sensitive and far-reaching radar for bullshit, and an equally advanced missile system for blasting it out of the air.

So, I just could not bring myself to wear that suit to see Tim off. The best way I could think of to honor my dear brother was to be myself that day.

“I am what I am.” He relished saying that to me – many times – probably because I spent too much time trying to change him. No, not him. It was his behavior I tried to change. Sporadically. Years ago. Until I finally figured out, I needed to give that up.

One of the things I admired most about Tim was that he seemed to care little about what other people thought of him. That could aggravate the hell out of me, because I had the audacity to think I knew what was best for him.

Tim Tupper Jones was my best friend before he became my brother. I loved him almost the minute I met him, when we bumped into each other, scrambling to play ball during a break between interminable Temple services.

I wanted what he had. Even then, at age 11, it was clear to me that Tim wasn’t playing for anyone other than him, that he saw the world from inside out, not outside in. He had his own guiding principles, and he followed them almost without fail.

Just one of many examples of this was something that happened just a couple of months after Tim and I became friends. There was this guy, Audi Verducci, who along with his gang of three or four elementary school punks, had been harassing me for at least two years. We’d had many a tussle, and most of them ended up with me getting thumped on.

On this day – I was in sixth grade – I came down into the playground on recess, and there was Audi and his group waiting for me. With the same dread I’d felt every time I faced them, I walked up and asked something like, “Do we have to do this again?”

I don’t remember what Audi’s response was. I do remember their fists were balled, and they were advancing on me, with Audi at the point. Then out of nowhere, Tim came flying from behind my right shoulder, smacking Audi square in the chest with the bottom of his tennis-shoed foot, sending him flying into his gang and knocking two more of them to the ground.

As they got to their feet and skittered backward, Audi said something like, “We don’t want any trouble with you. Our beef is with him.”

I assure you there’s no way that was true, nor had it even remotely been tested. But Tim didn’t give a crap about his image. He was doing what was necessary to end the conflict quickly and ensure that they didn’t bother me again.

That’s a story, personal to me, unique to me. Everyone who knew him had one. But this is what everyone who came to know about him: Tim was a warrior in the truest sense of the word, with the heart and courage of a lion. 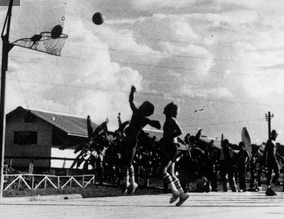 He was also the best all-around athlete I have ever been on a field or court or track with. This may be hard to believe for some of the people who met Tim later in his life, but in his younger years, athletics were a great source of release, solace, and pride for him. His physical abilities were outstanding, and doubly so in middle school, because he came into puberty early.

He did not do so gradually. Seemingly overnight, I found myself sharing a room with the Neanderthal version of my brother – hairy and smelly – but with the same ice blue eyes that could go from twinkle to flame in an instant. Except that now the flame was even more intimidating. One of my fondest memories of this was in eighth grade. I was doing layup warm-ups before our basketball game against our toughest local opponent, when I overheard one of their players say, “No wonder they’re whuppin’ everybody’s ass. They’ve got the coach playin’ with them.”

The way I saw it, the best strategy was to get Tim the ball. In football, I was the quarterback and Tim was the receiver. The receiver. Oh, there were other guys who lined up on the edges of the offensive line and ran patterns, but there was only one guy I threw to. Some of my passes were a little higher and leading him a bit more than his pace warranted – sometimes on purpose, others because I was known to heave an errancy or two – but we both knew he was toying with his defenders and had at ready a burst of speed that would put him alone at the receiving end.

There are at least a few guys who will tell you, if it was between Tim and anyone else for a ball – any ball – Tim got it.

And still, Tim was a great athlete not just because of his physical abilities – which increased every year well into his adulthood – but because of his heart, his mind, his fierce loyalty, his courage.

Tim cracked his femur during football practice one season. We didn’t know about the injury until later, because he laid there only for a minute, growled once, and then limped off the field. After practice, he questioned aloud if he’d be able to play in the following day’s game. All of us who overheard that quickly scrambled to tell him that he had to play because we’d get killed without him. So of course, he played. And of course, he broke that femur clean through. And only then would he allow himself to be carried off the field. Even then I saw more smile than grimace.

Tim was private about his Temple experience, but I do know one thing: when we lost our world and so many, many loved ones, Tim was convinced he could have stopped it. If only he had he been there. And the fact is that if anyone could have saved them, it would have been him. And Tim, being the Warrior that he was, could not help but see that as an unforgivable failure. It absolutely broke his heart.

It changed him on the surface. Not completely, of course, but occasionally. That incredible heart, that had powered and guided him so beautifully, was now a great source of torment to him. And still, no matter what he did or used to quell his pain, his greatness still shone through to almost anyone who spent any time with him.

The only place where I saw him find real relief was through sport, because it was there he could channel and release his pain while being a part of something bigger than himself. That meant everything to him.

But those athletic moments of relief weren’t enough. They became fewer and fewer, farther and farther apart, and all the outside shit he was using to bury and numb the inside anguish began to fail him, and then it just wasn’t working at all.

Then along came his first child, Chelsea, and the walls around his heart immediately and permanently softened. Then came his second daughter, Taylor, then his first son, Nathan, and finally the baby Jacob. Nothing came close to healing Tim the way those four lovelies did, although believe me, their dear Mama’s tried. But Tim’s four beauties busted into that lionheart of his and made such a difference.

Still he was tormented, and not even his greatest joys could persuade him to take the best care of himself.

But this is what I want his wonderful children to know. I’m going to say it to them again and again, as many times as is needed for them to know it in the deepest part themselves:

Your Papa knew better than anyone how difficult he could be, and he knew how understandably frustrated or angry you could be with him. But every time he and I talked, he spoke of each of you, and told me how much he adored and admired all of you so much. And he always knew you loved him.

Like I’ve already said, there was no telling Tim Jones to do anything. Those four Jones children, his lovelies, influenced him in the only way that anyone could, which was by being loved by him and setting his heart free. In that way they helped him more than anyone possibly could to start taking way better care of himself. It was those four who took him to a place of greater understanding, contentment, and peace. His love and admiration for Chelsea, Taylor, Nate, and Jake – the happiness it brought him – has greatly tempered my grief. I love and am grateful to every one of them.

In writing to tell a friend about Tim’s passing, something just poured out of me. I decided I like it then, and I still do. This is what I wrote:

Life is good. And at times it’s hard as hell, which may play the greatest part in the good.

I believe it was at that vantage point Tim and I became one and loved each other as purely as I’ve ever known.

Tim, my dear, magnificent brother, may you rest in peace. You so deserve it.

(Stephan Jones is a frequent contributor to the jonestown report. His earlier writings for this website appear here. He may be reached at moreheart1@comcast.net.)