(Dr. Brad Crowell is Chair of the Department of Philosophy and Religion at Drake University. He has written several articles for the jonestown report, including a previous profile of Edith Roller’s college years. His complete collection of articles is here. He may be reached at brad.crowell@drake.edu.)

Edith Roller’s diaries entered the Jonestown corpus over twenty years after the tragedy in 1978. As a result, the details of her life were not of interest to the early researchers and writers about Peoples Temple and Jonestown who captured the fears and fascination of the American public. Only a handful of more recent books about Jonestown mention Edith, and they are limited largely to the story she presents in the diaries of her day-to-day activities as a member of the group in San Francisco and then at the Jonestown compound in Guyana. Except for a few details about her life before Peoples Temple – like her public resignation from her position at San Francisco State University accusing the school’s administration of fascism – little is known about her life prior to joining Peoples Temple. Julia Scheeres is the only recent writer to attempt to go beyond Edith’s persona in Peoples Temple documents. Using a family history, Scheeres notes that her birth in a coal town resulted in her understanding the struggle of “miners, including her father, to obtain living wages and safe labor conditions” (Julia Scheeres, A Thousand Lives: The Untold Story of Hope, Deception, and Survival at Jonestown, 2011, p. 30; cf. Jeff Guinn, The Road to Jonestown: Jim Jones and Peoples Temple, 2017).[1]

Edith rarely referenced her own childhood in her diaries, the spaces of her early life held little draw for her. In fact, on her one recorded trip back to Colorado for a small family reunion in August of 1976, she chose to stay in Dillon rather than travel the mountain roads back to the towns of her childhood. Yet, childhood and community leave an indelible impression on us, and Edith’s birth into a family that experienced economic insecurity was tempered by relatives who had access to land, connections and wealth.

Edith’s father, Frederick William Roller, was born in August 1884. He grew up in a large family in central Iowa. Census data from 1885 and 1900 record young Fred Roller living in Knoxville, Iowa with this large family that had roots in Germany. By 1905, however, Fred had moved in Routt County, Colorado. Fred, his mother, brother, and sister are all mentioned in the newspapers of the time. Perhaps the Rollers were drawn to this remote region in northwestern Colorado by the Enlarged Homestead Act of 1909 that had recently made more marginal land available for purchase for the cost of the processing fees. Fred Roller made his first homestead application for a plot of land southeast of the town of Hayden during the fall of 1905 (Routt County Republican, August 12, 1912). 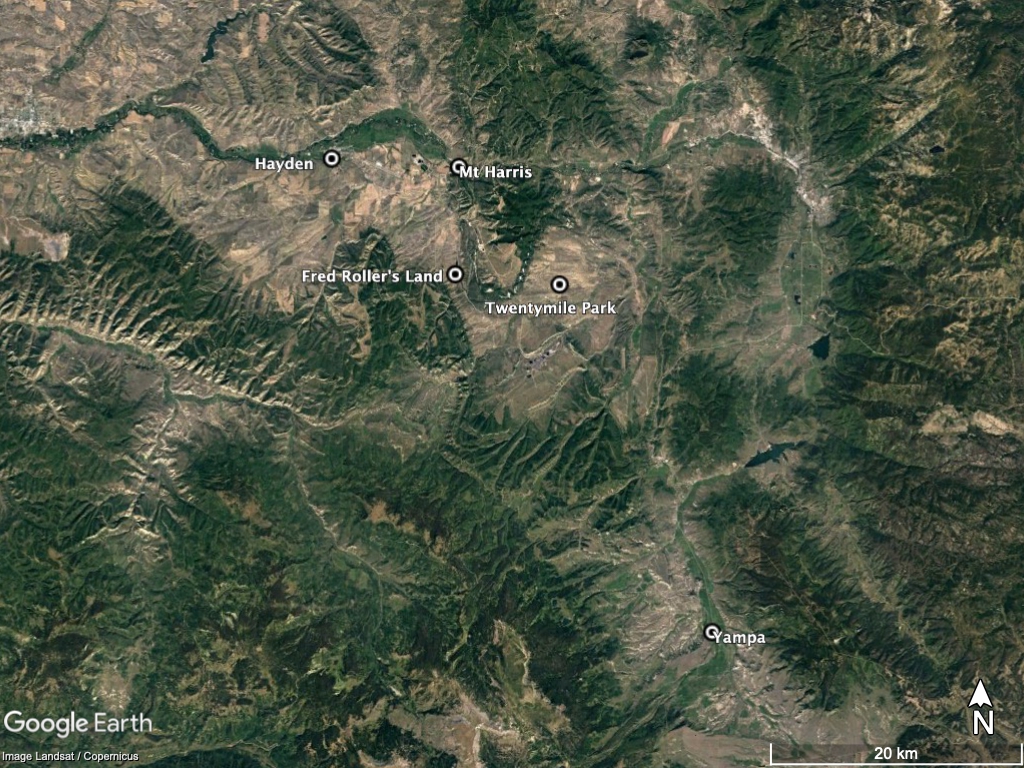 After harvest, when attention could turn to other issues that year, Fred married Elizabeth Rice, a local teacher, on December 6, 1914 (Routt County Republican, December 11, 1914). The couple met while Elizabeth taught at the school in Upper Hayden. Fred had earned a friendly reputation as an industrious and honest young man. After the young couple took a short honeymoon in Denver, they returned to Hayden to begin their lives together. Renting a farmstead from John Bauer, Fred would continue to ranch and attained the stability to begin raising a family (Routt County Republican, December 11, 1914).

Fifty years later Edith listed December 18, 1915 as her birthdate on her passport and California drivers license (RYMUR files 89-4286-1730, Edith is listed as Body #89-D), but the region’s newspapers were not that specific. Clearly sometime in December, Edith was born to Fred and Beth Roller, but specifically where is unclear. She listed her birthplace as Mount Harris, a bustling mining town close to Steamboat Springs, but Fred and Beth lived in the nearby town of Hayden where they were renting a farmstead. The newspaper evidence located her birth in Upper Hayden (Steamboat Pilot, December 29, 1915; Routt County Sentinel, January 7, 1916). The announcement that she and her parents were visiting her great grandmother in nearby Yampa, also suggests that she was born in Hayden (Yampa Leader, December 31, 1915). One detail that allows for a birthplace near Mount Harris is that Fred’s brother, Vernon, lived just southwest of the mining town before he moved to Steamboat Springs to work for the engineering company of W. I. Hoklas as a draughtsman (Steamboat Pilot, September 18, 1918; Routt County Republican, September 13, 1918).

According to Laurel Watson, curator at the Hayden Heritage Center, this situation did fit a common pattern among ranchers in the area at the time. Many of the ranchers in the Hayden area would work in the newly opened mines at Mount Harris during the winter months after their crops were harvested. The Colorado-Utah Coal Company opened the coal mine in 1914 and quickly built a small mining town that provided housing for workers and their families. Small houses were rented to workers for $6-$7 per month. The company also provided a doctor, making the mining town a good location for giving birth in the early twentieth century. Unfortunately, most of the bureaucratic records of the mines were destroyed in a fire, so there is no confirmation that Fred Roller participated in this pattern of ranching and mining to make a living.

Fred Roller’s attempt at ranching in Routt County could have failed for a variety of reasons. During the 1918 and 1919, there were several weather events resulting in droughts in the area (NOAA National Centers for Environmental information; U. S. Dept. Agr. Bul. 1031 [1922]), leading to smaller than usual crop yields.  Fred would sell his land in less than two years.

Starting in 1918, most of the available information places the young Roller family in Yampa, a town that Fred and family enjoyed (Routt County Republican, October 18, 1918). But the year was difficult on Elizabeth. After losing her grandmother in late 1916, her mother died in the resort town of Dillon in late 1918 (Routt County Sentinel, November 22, 1918). World War 1 was raging in Europe: Fred signed up for service at 34 years of age, while Elizabeth’s younger brother Earl enlisted and was serving in France (Routt County Sentinel, November 29, 1918). Fred continued working in agriculture, trying his hand at raising sheep (Routt County Republican, February 14, 1919) and growing hay and grain (Routt County Republican, July 25, 1919). Yet Fred must have been thinking of moving on from agriculture and farm laboring. A brief newspaper notice on July 5 reported that Fred had gone to visit his brother in Twentymile, an emerging coal mining camp nearby, and was considering entering the industry – a dangerous but lucrative move (Routt County Republican, July 5, 1918; for Twentymile, see USGS Bulletin 748). 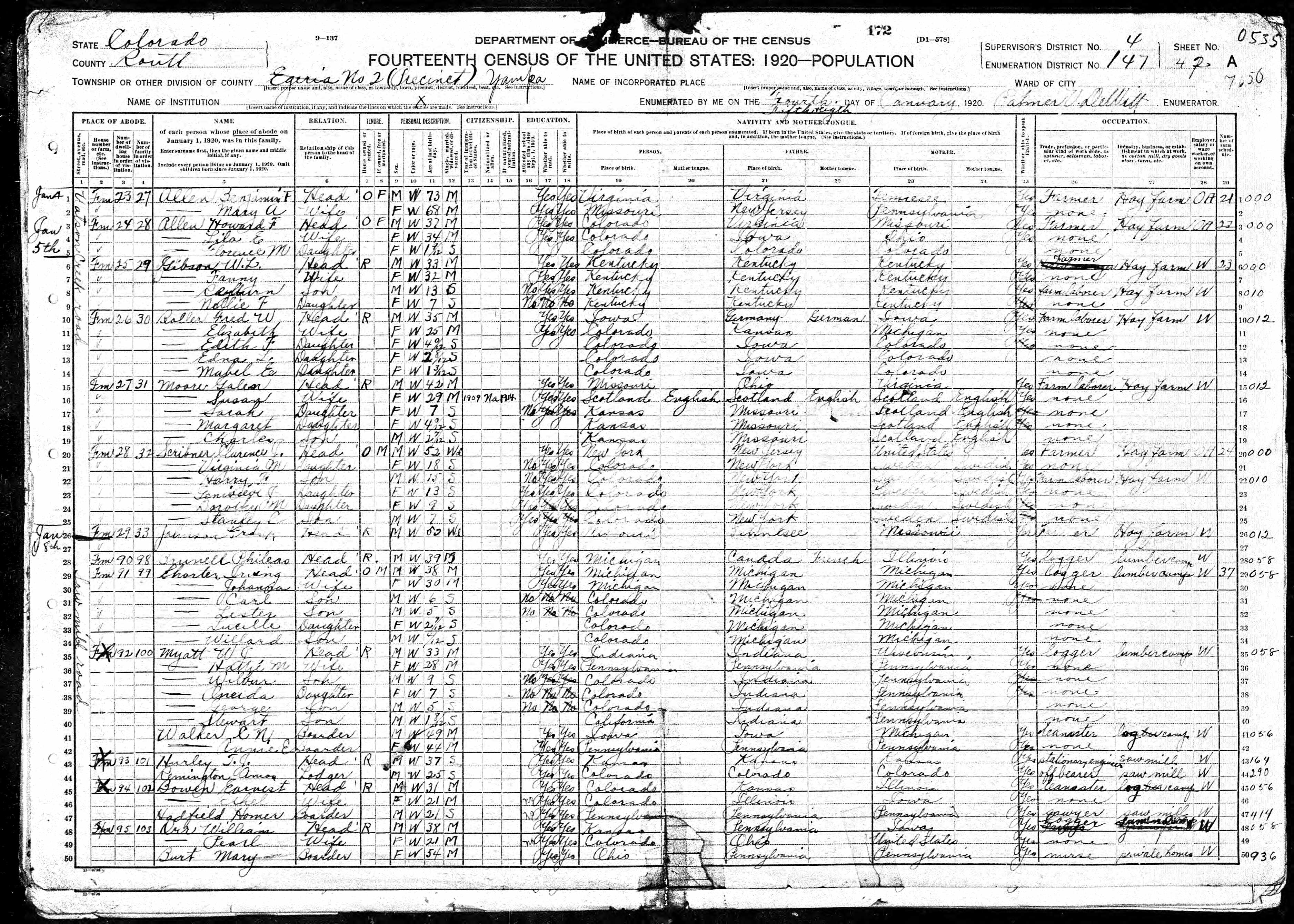 According to census records in 1920 (click on graphic for full image), Fred and Elizabeth still rented a house on “Watson Creek Road,” and Fred was listed as a farm laborer. Early that year, Ruby Rice, Elizabeth’s sister and Edith’s young aunt died of pericarditis (Routt County Sentinel, April 2, 1920; Summit County Journal, March 20, 1920), an inflammation of the thin tissue surrounding the heart. In late July of 1920, Fred sold his acreage to Laura B. Gerbert, whose family owned adjacent plots, with little fanfare (Bureau of Land Management nr. 764713).  By late 1920, the Roller family had left the mountains and moved to Idaho Springs, only 30 miles west of Denver (Routt County Republican, December 24, 1920).

Little is known about the Rollers for the next few years, they are mentioned in a short notice in the Steamboat paper in August of 1926 that they were visiting family but they lived in West Portal, Colorado (Steamboat Pilot, August 4, 1926), a town later known as Winter Park. It is possible that Fred worked there on the Moffat Tunnel, a major construction operation that provided a route through the continental divide. The tunnel was completed in February of 1928.

By 1926 though, the family seems to have moved to Douglas County, just south of Denver, when Edith and her three sisters are praised for their perfect attendance at school (Record Journal of Douglas County, October 22, 1926). As the children grew up, they visited their family who continued to live in the small towns around Steamboat Springs, but they now held stronger connections to their new urban lives. Fred and Beth Roller continued to live around Denver in the 1930s while Edith and her sisters were in college and starting their independent lives. Edith’s father, Fred Roller, died in his home in Denver in April of 1936 (Oak Creek Times, April 9, 1936). Elizabeth would stay in Denver until her death on December 27, 1968.

[1] Research and travel support were graciously provided by The Center for the Humanities at Drake University. I would also like to thank Laurel Watson at the Hayden Heritage Center and Katie Adams at the Tread of the Pioneers Museum in Steamboat Springs for discussing the history of the region from the early 1900s.