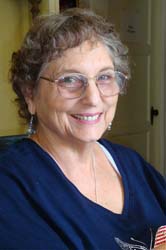 Claire Janaro looked good in purple. She loved to dress in other colors too – especially bright colors, blues and reds and oranges – but in purple Claire was radiant. Claire was beautiful when she wore purple. And her smile was lovely, it lit up her eyes, and was warm and personal and generous. Knowing a bit about her life I couldn’t help but see her smile as concrete evidence of the resilience of the human spirit.

One cannot write about Claire without mentioning Liz Forman, Claire’s lifelong friend, her soulmate. The night I met Claire I had only conversed with Liz on the telephone, but Liz liked me and that was good enough for Claire. She invited us both over. Following a plan that Liz concocted, I drove to her house and introduced myself and then she brought me to Claire’s, stopping along the way to pick up food. Claire met us at the front door, dressed in a purple sweater, warm and welcoming, and I was struck by her sparkling smiling eyes.

Over dinner we discovered that my mother had been born in the same year as Claire and Liz, and that I had been born between the births of Claire’s two children, Mauri and Daren. In addition, like them, my mother had been Jewish. I speculated that all of this was why Claire felt so motherly to me right from the start. I soon learned that a great majority of people felt likewise, people who had known her much longer than I, and was embarrassed of the feeling of possessiveness I identified within myself. Over time, I came to see that Claire was an archetypal mother figure, and that it would be natural for anyone to see her that way.

I was lucky to spend a great deal of time with her. I attended her birthdays and Liz’s birthdays, events at which they would revel in stories about meeting one another in North Hollywood High, about their time in the Temple and times since. We had dinner often, Claire and Liz and others, and I began to spend time alone with Claire on occasion. I took her to the movies to see Her, the Spike Jonze film. When a particularly intimate scene came on I felt like a ten-year old sitting beside his mom. What had I been thinking? What was she thinking? Was I wrong to take her to this film? We never spoke about the scene, but she said she enjoyed the movie.

Claire and I drove together to a gathering of ex-Temple members in San Diego. Our rooms were in a hotel in which other participants were staying, but each morning she and I got to have breakfast together. Afterwards we went to the house where the event was taking place. It was obvious how much everyone adored and cherished her. We spoke about the experience on the drive home, and I noticed for maybe the first time that she was having trouble coming up with the words to communicate her thoughts. She apologized, ascribing it to being tired after such a long, fulfilling trip.

I had interviewed her on her experience in the Temple a few times shortly after we met, but after that our visits became about the present, our friendship. We no longer spoke about the past. I would bring my dogs to her. She loved them. We walked them in the park behind her home, and they would sit with her, one on her lap and the other beside her in her chair, as she beamed, staying very still so as to not disturb them. Visitors – mostly long-time friends of hers – would come to town, and on those occasions the Temple came up frequently. She would participate in the sharing of memories, but over time grew more frustrated with her difficulty in expressing herself, becoming more and more withdrawn.

Her condition was confusing, both to her and to others around her. She was apologetic when she found herself unable to finish her own sentences or get a thought across. No amount of reassurance seemed to help her go easier on herself. I picked her up for dinner at my house with a friend from the Temple who was in town and staying with me. She complimented my car. “It’s beautiful,” she said, pronouncing it as two words: beauty and full; I loved how she said that word. She asked me where I got it. I answered her, not mentioning that she had been in the car many times. She asked the same series of questions a second and third time on that drive. I was surprised then when we turned onto my street and she exclaimed, “There’s your house!” though she probably hadn’t been there in a couple of years.

In time she gave up apologizing and just started riffing, making things up to finish a sentence, words which did not relate to what she had begun to say and which made no sense. And on the occasion of my final visit, she was unable to say very much at all. We sat there, looking at one another. I felt I could see her deep inside, behind her eyes, unable to express herself, frustrated but resigned, each looking at the other in helplessness.

I wanted so much to do something for her, so one day I made a couple of phone calls, and found my way to the library at North Hollywood High. Winter vacation was to begin the following day and it was not a quiet place, sounding more like a gymnasium than a library, the kids chattering and joking, loud and excited. The librarian was familiar with my mission from our conversation the day before. He led me to a locked case in a back room, extracted a couple of yearbooks and set me up at a scanning station.

I soon found what I was looking for: the senior pictures of Liz and Claire and their lifelong friend Jan. In her photo, Claire was turned to her right, her smile so bright. “Movie star beautiful,” as I had heard Liz describe her in those days. Unfortunately, the picture was right at the inside edge and the binding was too tight, cutting off half of her face. I had hoped to enlarge it as a photo for her but gave up on the idea.

I kept looking. I found Claire in the Winter ’57 Student Court, but she was lost in the sunlight of the group photo. And she was named as the vice-president of the North Hollywood High National Forensic League. “Members devote their time to [the] study of speaking, debates and similar training,” the yearbook explained.

Finally, here she was in the forefront, her hair lighter than in her senior portrait, smiling directly into the camera. It was so clearly Claire that it took my breath away.

I scoured the rest of that book. There were pictures of the hallways, and as I suspected the building hadn’t changed much. There were so many bright faces, so much optimism. What became of each of them? What did their journeys through life look like? I thought about life and youth and style, how different things were when Liz and Claire had attended there, how very much the same kids then would have been with the kids all around me.

I realized then that I was now sitting in silence. I looked up. They had all left, all but one. A young girl was in a conversation with the librarian, intent on finding some information for an unfinished project, here on the last day before a school break. She was the age that Claire had been when she was a student. As I watched her, I thought of my friend, my friend who had disembarked from a plane on November 1978, two days before her daughter’s birthday, excited to see her children again, excited to see the new home that she had helped build from afar, only to learn that the world had turned upside-down while she had been in the air and that it would never be the same again. I thought of how she had been questioned and then whisked away and deposited – alone – in a strange hotel room, with no recognizable face around her, as she did her best to glean any information that she could about her family and friends and the unfolding tragedy. Would this girl have to weather the amount of deep sorrow that Claire had had to endure? What was in her future?

This year I have thought a lot about Claire alone, in a nursing home, unable to communicate, locked in and isolated all over again as COVID changed her world once more. There is a theory that we are each here for the task of healing our respective souls, and that we make agreements with other souls to have necessary experiences in our life for that journey. I have no idea about the validity of any of that theory, but when I see Claire through the framework of that belief system it occurs to me that if it is so, hers must be a very brave soul indeed, one who chose circumstances by which she would find herself alone at the two most trying times in life, times that would have broken the heart of anyone. It helps me to see it in this way, it hurts a bit less when I think of her. I miss her, I miss her brave soul, I miss her endearing smile, and I miss seeing her, delighted in how good she knew she looked in her purple sweater.

(Richmond Arquette has been a longtime student of Peoples Temple, and has become a friend of many in the Temple community. He is currently working on a television miniseries on the history of Peoples Temple. He is a regular contributor to this site, and his full collections of articles can be found here. He can be reached at richmondarquette@gmail.com.)