(Editor’s note: Jennifer Kathleen Gibbons is a regular contributor to the jonestown report. Her other article in this edition is Remembering Don Beck Through Cults Duo. Her complete collection of articles is here.)

The night of November 17, 1978, all Vernon Gosney was trying to figure out was who he could trust.

The outsiders – Congressman Leo Ryan, his aide Jackie Speier, several family members, and a small press corps covering the story – had finally arrived. Vernon was trying to determine who was who. One false step could cost him his life.

Vernon had already had a hard life. An adult child of an alcoholic mother, he got married at age 19 to Cheryl Wilson, a member of the Black Panthers. Both of their families disowned them. The only place they felt accepted was Peoples Temple, which welcomed them into their communal quarters in Ukiah.

Cheryl gave birth in 1973 to their son Mark. Because she had been given an overdose of anesthesia during the cesarean, though, Cheryl was left brain dead. Frantic, Vernon turned to Jim Jones for a miracle, but nothing worked. Finally, Cheryl was released to the care of her mother, and Vernon became more involved with the Temple. 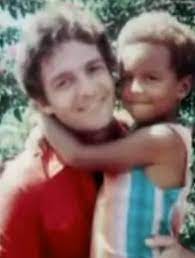 He and his son moved to San Francisco, where Temple member Edith Roller became Mark’s primary caretaker. “Part of the philosophy [of Peoples Temple] was that family relationships are sick and need to be broken down,” Vernon told the Advocate in 2003. “Still, Peoples Temple was a family, if a punishing family. It was an intense experience of coming together and living communally with people from all different backgrounds. It satisfied this basic desire I had to connect with all humanity.”

Vernon starting going to gay bars, then had a relationship with a transgender man. While frowned on by Temple members, it was permitted by Jones. Vernon had filed suit against Cheryl’s doctors in a lawsuit charging medical negligence. If Vernon won, it meant money for the Temple. Keeping Vernon in the fold was necessary. However, the jury ruled for Cheryl’s doctors, saying she was “too black” for them to realize she wasn’t getting enough oxygen during Mark’s birth. It was the last straw. Vernon decided it was time to start over, begin again. Where could he do that? The place that was called the Promised Land. Guyana.

Soon after they arrived, Vernon realized what a terrible mistake he had made. The violence, the long hours, the White Nights horrified him. He soon found an ally in Monica Bagby, who, he would tell the Advocate, was “a big, brassy dyke, just like I like.” They decided they had to leave, but how? If they tried on their own – or even expressed their feelings of unhappiness or dissent – they risked being put in the Extended Care Unit like Eugene Chaikin, Shanda James, and Barbara Walker. But they also knew something had to be done.

On November 17, as Dianne Wilkinson and the Jonestown Express entertained the community, Vernon wrote a note saying, “Vernon Gosney and Monica Bagby please help us get out of Jonestown.” Vernon hesitated because of Mark, but decided to seize the opportunity to get himself out first. He would come back for Mark. And despite his experiences there, he still truly believed that Jonestown was better than racism back in the states.

Unsure of who was who, Vernon gave a note to NBC correspondent Don Harris, thinking the reporter was Congressman Ryan. A little boy saw what was going on and yelled, “He passed a note!” The next day he and Monica confirmed they wanted to leave, along with fourteen other people. When Vernon talked to Ryan, he told the congressman they were all in danger. Ryan dismissed the warning, saying that they all had a “congressional shield of protection.”

Of course, the rest of the story unfolded on the airstrip: Congressman Ryan, Don Harris, Bob Brown, photographer Greg Robinson and Jonestown defector Patricia Parks were killed by Temple gunmen. On board one of the two planes, Temple member Larry Layton shot Vernon twice in the abdomen and once in the leg. Somehow Vernon escaped into the jungle, where he was kept alive by fellow survivors. He woke up in a hospital in Puerto Rico, and learned that his son Mark was dead.

After he returned to the States, he numbed himself with drugs and alcohol. Adding to the sadness was Cheryl dying in 1981. He later told Hazlitt: “I drank every day and took pills and took everything I could until I was unconscious. It was just too painful to face myself, to face the loss of my son, my guilt, my remorse, the mistakes I had made. Nobody could’ve fucked up my life more than I did.”

He went to Hawaii, where he became a police officer. He had several relationships and lost a husband to AIDS. He himself was HIV Positive, but thanks to new medications, he kept going. He did interview after interview about what happened in Jonestown.

Sometimes while watching those interviews, I wondered why he was putting himself out there? Didn’t he get the fact there will be people continually judging him for what happened? But I’m guessing he knew he would be judged. Yet he had to tell the story, so people might somehow understand.

When I heard about Vernon dying in January, I felt sad. I never met him, But I also had one word in my head: mahalo. Mahalo is used in Hawaii to express appreciation, grace.

Aloha, Vernon. Mahalo to you.