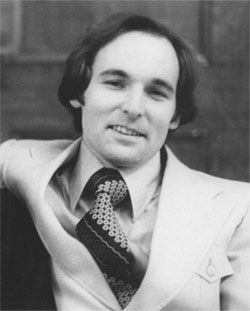 Among the survivors of the deaths in Jonestown on November 18, 1978, was Michael Prokes, a 31-year-old former broadcast journalist who had left his job with a Modesto, California television station to become the Temple’s main spokesperson and press contact. As people were dying that day, Maria Katsaris called Prokes and the two Carter brothers – Tim and Mike Carter – and gave them a suitcase of money along with a letter of instruction to deliver it to the Soviet Embassy in Georgetown. The suitcase was too heavy to carry even as far as the road between Matthews Ridge and Port Kaituma – much less to Georgetown, 150 miles away – but the mission saved their lives.

Four months later, on March 13, 1979, Michael Prokes called a press conference in a Modesto motel room. Eight reporters attended. After reading a statement, Prokes excused himself, went into the bathroom, closed the door, turned on the faucet to cover the sounds he was making, and shot himself in the head with a Smith and Wesson .38 revolver.

A note was found with the body. It read:

Don’t accept anyone’s analysis or hypothesis that this was the result of despondency over Jonestown. I could live and cope with despondency.

Nor was it an act of a “disturbed” or “programmed” mind – in case anyone tries to pass it off as that.

The fact is that a person can rationally choose to die for reasons that are just, and that’s just what I did.

If my death doesn’t prompt another look at what brought about the end of Jonestown, then life wasn’t worth living anyway.

In the days before his suicide, Prokes wrote notes to several people, enclosing a thirty-page statement he had written about Peoples Temple. One note went to San Francisco Chronicle columnist Herb Caen, who reprinted the note he received:

“The ‘total dedication’ you once observed of me was not to Jim Jones – it was to an organization of people who had nothing left to lose. No matter what view one takes of the Temple, perhaps the most relevant truth is that it was filled with outcasts and the poor who were looking for something they could not find in our society.

“And sadly enough, there are millions more out there with all kinds of different, but desperate needs whose lives will end tragically, as happens every day. No matter how you cut it, you just can’t separate Jonestown from America, because the Peoples Temple was not born in a vacuum, and despite the attempt to isolate it, neither did it end in one.”

Prokes also sent a copy of his statement to Temple attorney Charles Garry. The text of a handwritten cover note dated March 13, 1979 follows:

I just wanted to thank you and everyone there for all the help you’ve been to my friends.

You’ve been a tremendous comfort when it was needed most.

Please take care of yourself and thanks once again for your steadfast support.

P.S. You may not agree with all my perceptions in the enclosed materials, but – for what it’s they’re worth – it’s an honest effort.

Much of the first part of Prokes’ press statement spoke to the existence of a tape which captured the final hour of the Jonestown community. Despite his belief that the tape would never see the light of day, it was eventually released to the public, along with more than 900 other tapes recovered from the site of the mass deaths. This website includes various versions of the transcript of the so-called “death tape,” along with a summary and an analysis. That tape, together with transcriptions and summaries of other Jonestown tapes, may also be found here.

Attached to his unsigned statement to the press wereseveral pages of transcripts from radio interviews following the deaths, as well as press releases which he most likely wrote during his tenure as Temple press contact.

Mike Prokes had been a television newsman in Modesto who first contacted Peoples Temple in October 1972 to do a story – although some have described his intent as wanting to do an exposé – on Jim Jones. In a statement appended to the press release, Prokes described another role he initially assumed when he first entered the Temple: that of an informant for an unknown government agency.

This attachment to Prokes’ statement is a transcript of a statement that Temple attorney Mark Lane made on KGO Radio in January 1979, two months after the deaths. At the time of Mr. Lane’s statement, the government’s investigations – both investigative and oversight – were just getting underway: the House Foreign Affairs Committee would issue its report four months later; the Treasury’s Bureau of Alcohol, Tobacco and Firearms was investigating reports of an arsenal and gun-running in Jonestown; the Justice Department was contemplating, but had not filed any criminal indictments pending Guyana’s prosecution against Larry Layton, Charles Beikman, and Stephan Jones – and of those three, only Layton was tried in the U.S. – and the State Department was conducting its own probe into what its Embassy staff knew.

The affidavit made by Debby Blakey and referred to by Mark Lane was filed in May 1978, six months before the deaths. It was both a fundamental reason for Mr. Ryan’s trip to Guyana and an omen of what might happen if he went. The affidavit is here.

The following typed statement was also part of the package which Prokes sent to Temple attorney Charles Garry. A handwritten note by Guyanese journalist Mohammed Hamaludin – later a columnist with the Miami Herald – at the top of the page has been photocopied into illegibility, as is part of the first line which may tell where the transcript originated.

Prokes then attached several press releases and public statements from Jonestown’s final 18 months, including: the Press Release of April 18, 1978, in which Peoples Temple attacked the Accusation of Human Rights Violations made by the Concerned Relatives; the August 21, 1977 press release, in which the Temple continued its defense against the negative press generated as a result of the New West article; and a report written by John and Barbara Moore following their visit to Guyana in May 1978.