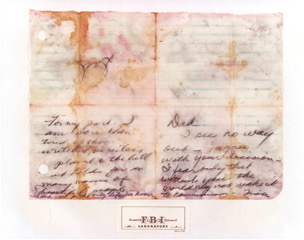 One of the very few items found on Jim Jones’ body following the deaths in Jonestown was a single sheet of paper on which was written a note of farewell to the Temple leader. Described by the FBI as “a piece of lined notebook paper approximately 6 inches by eight inches,” the note was “saturated with body fluids.” It was dried enough so that it could be handled, but the note itself is stained, and the writing has not reproduced very well.

The note is signed with a single name – “Tish” – and is believed to have been written by Tish Leroy, also known as Laetitia Marie Eichler. A 48-year-old white woman with a background in accounting and office administration, Tish Leroy was on the Temple’s Planning Commission and in Jonestown’s Agriculural Office. She also represented Jonestown in a number of meetings with Guyanese government officials. Descriptions of her loyalty to Jones and the Temple he led are echoed in the words of this note.

Dad
I see no way
out – I agree
with your decision –
I fear only that
without you the
world may not make it
to communism – Tish
For my part – I
am more than
tired of this wretched, merciless
planet & the hell
it holds for so
many masses of
beautiful people –
Thank you for the only life Ive known