There was a time when Jonestown meant absolutely nothing to me. I may or may not have known that there was an event known as “Jonestown” that happened in 1978, but I surely didn’t understand either its significance or its complexity. And right there is the ignorance, the ignorance that many still have to this day.

As I reflect on what Jonestown means to me at the 40th anniversary mark – and after years of study and friendships made – I now know that this was so much more than just an event. “Events” are marks on a timeline. As a teacher of history, I believe there is nothing worse than looking at historical events as just that, a mark on a timeline. But in that role as a history teacher, I am a position to make sure that, for my students at least, they will not suffer from the ignorance I once had.

But how can a moment in history – an “event” on a timeline – become something that is realized for what it truly is? 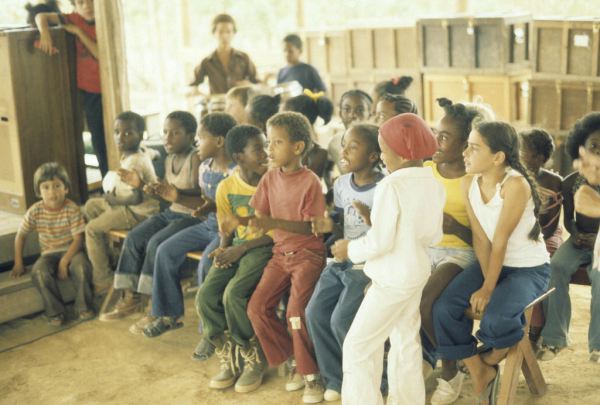 I have written many articles now on Jonestown. I feel very blessed that this has been something I have been allowed to do, a place to share my thoughts and feelings on a historical moment in time that has now been a part of my life. I look back at the articles I have written on the subject, many based on the educational aspect of the topic, and some even more on a family and personal level. One of the articles I cherish the most centers around meeting Tim Carter, someone who survived the event with courage and strength to talk about it, and someone whom I now consider a close friend. Tim lives a peaceful life, surrounded by his loved ones.

He is also surrounded by hope. It is a hope that brought him into Peoples Temple, a hope he shared with most of the people who went to Guyana, a hope that did not die on November 18. But how can I communicate that to others?

At the core of my engagement in this moment in history, 40 years ago, the story of Peoples Temple and Jonestown touches me at three levels that are the most important aspects of my life: education, social equality, and family. They demonstrate why I keep coming back to the story, and why 40 years later I still feel that it is one that needs to be told, that needs to be held accountable for accuracy, and that needs to be understood.

First, I look at the educational side of my life. I have a passion of making learning as something – sadly – it is not these days, and that is actual learning. Those in the educational world know that too many times, education becomes an obscure attempt to “teach to the test,” and under those circumstances, true learning does not take place. They may get the facts – items that become one more part of a timeline – but the concept of humanity is lost. When I teach the topic of Jonestown to my history and sociology students, I want them to feel my own connection and passion, and in turn to find that connection and passion within themselves. Because that is what is missing today. I know that there are many other moments in history or in the social realm when they would make a similar commitment, when humanity would shine through. That’s when the seed of hope is planted.

Second, I look at the idea of social justice and equality. The original notion of Peoples Temple was one of activism, doing something about social issues. I look around today at the exact same issues that Jim Jones and his people fought for and against, and I see they are still going on to this day. We have a climate today that is very similar to the climate that allowed Jim Jones to gain such a huge following. And when I find myself frustrated with the people today ignoring the need for social change – particularly with regard to issues of race – I myself long for a group that truly cares and truly tries to do something about it. I myself long for a Peoples Temple movement, although one without the corrupt leader and the tragic ending. Sadly, when we study human nature, it becomes evident that so much needs to fall into place for a movement like Peoples Temple to work completely and successfully. And even if that does seem impossible, it is still worth the attempt. Hope can be found here as well. Hope can grow.

Finally, I see my connection to Peoples Temple is due in part to the concept that is known as “family.” There were so many people who joined the Temple and who left for Guyana because they wanted to make life better for their own family. That fact alone should end all debate on whether the people of Peoples Temple were “crazy.” These people took a risk, indeed, but it was one that they felt no other choice but to take. I look at my three sons every day, knowing in my heart I would do anything to help put them in a better position to be successful. That’s exactly what the people of Peoples Temple were doing. The environment their country put them in made them feel trapped and without hope, and Peoples Temple offered hope. Why wouldn’t someone go for that? They clung to hope, just as all of us should.

It has been 40 years since that tragic day in Guyana, 40 years of memories for survivors and family members to reflect on what was gained, and ultimately what was lost. With all my research, and all my friendships made with people involved with the Peoples Temple movement, I see so many positive role models. I see so many people who were close to those horrible moments living amazing lives of love and giving, passing on to their children all the positive values that truly embodied Peoples Temple. I see education, social justice, and strong families that show to me humanity at its best. When my life hits its own rough spots, these people show me that I have no choice but to persevere and overcome.

Here lies the true lesson that is Jonestown. Jonestown and Peoples Temple were not about death. It was and is about hope, not in the way Jim Jones thought when he called it “revolutionary suicide,” but in the memories and hearts of the survivors and the loved ones of the people murdered that awful day in 1978. This is hope that transcends, this is the hope I cling to when I want our world to be a better place.

Look away from the endless documentaries that will spill across your television screen this year, the ones about Kool-Aid and the deaths. Look more deeply into Jonestown and Peoples Temple. Only there will you find the hope this world needs today.

(Craig Foreman is a Sociology and History Teacher with the Expedition Academy at Theodore Roosevelt High School in Kent, Ohio. The school’s website is www.expeditionacademy.com. His previous stories for this site may be found here. He may be reached at Ke_cforeman@kentschools.net.)