(Heather Shearer is a professor of rhetoric and writing at the University of California, Santa Cruz, and is a regular contributor to the jonestown report. Her complete collection of articles for this site may be found here. She can be contacted at hshearer@ucsc.edu.)

“Our archives are treasure troves – a testament to many lives lived and the complexity of the way we move forward. They contain clues to the real concerns of day-to-day life that bring the past alive.”
― Sara Sheridan

The bud
stands for all things,
even for those things that don’t flower,
for everything flowers, from within, of self-blessing;
though sometimes it is necessary
to reteach a thing its loveliness . . .
― Galway Kinnell

Writing is our most powerful tool for organizing ourselves into collectives and directing the action of those collectives. In his wide-ranging book dissecting humanity’s history and predicting its possible futures, historian Yuval Noah Harari explains that writing “broke the data-processing limitations of the human brain” and “made it possible to . . . organise complex bureaucracies and to establish vast kingdoms” (157). Writing enabled humans to achieve the seemingly impossible, such as erecting the pyramids. How did this happen? “Literate bureaucrats,” acting on behalf of pharaoh, secured the laborers and food needed to undertake a large-scale, long-term building project (162). Organizational prowess, not just sweat and blood, built the world we know today. 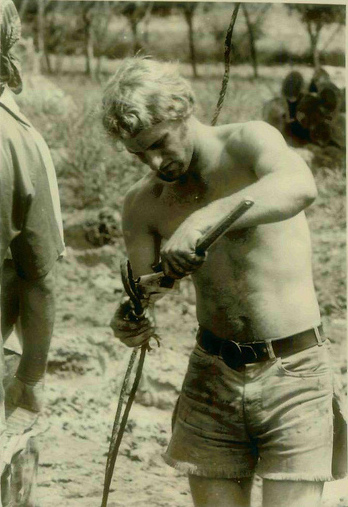 As I’ve described in more detail elsewhere (2010; 2018) Peoples Temple made good use of writing to build and maintain the Peoples Temple Agricultural Project. An analysis of their labor reveals that, as much as any hammer, ship, or bulldozer, texts were an essential tool for building the community. At every stage in the process of establishing and maintaining Jonestown, members’ efforts were assisted and shaped by the textual tools they chose to use or were obligated to use. During process of relocating members from California to Guyana, for example, members interacted with a range of texts, each of which was connected to other texts, tools, or people. This was the basis of a thickly networked site of activity.

One subset involved activity related to packing and travel. Many of these texts in this network are lists created by Peoples Temple members for in-house distribution and use. There were lists that told émigrés what to bring and what not to bring. There were master lists that referred to emigration paperwork. One list, titled “Instructions for Packing to Go Over,” provided a catalog of rules that guided members’ packing processes, including the total size and weight of items they could bring with them and the time it would take for the items to reach them in Jonestown.

This same network of texts also included those intended for outside audiences, such as the boilerplate letters of introduction that travelers used to ease interactions with airline personnel and Guyanese officials. Typewritten on Peoples Temple letterhead and signed by a member of Temple leadership (which bestowed authority by proxy), these letters emphasized the nature of the organization and the reason for travel. In addition, before traveling to the Promised Land, members prepared personal, handwritten letters for close non-member acquaintances or relatives, notifying them of the member’s impending departure. Although the wording varies from letter to letter, each one provides details about upcoming travel to the agricultural mission. The consistencies from letter to letter suggest that they were developed from templates developed for repeated use.

As is suggested by the work of A.N. Leont’ev (1974), L. Vygotsky (1978), M. Cole (1991), Y. Engeström (1991), E. Hutchins (1995), and many others, our selves do not begin and end with the boundaries of our skin; instead, our minds and bodies are distributed across space and time through our use of tools to accomplish goals. Consequently, objects that mediate people’s work can do more than simply evoke memories of those people; they can be seen as extensions–as part of–of the people who used them. A good example of this is the set of keys, now sitting on my desk, that my father used for forty-two years in his job as a railroad laborer. The keys on the ring, burnished by decades of handling, are one of the few tangible pieces of him that remain. When I hold those keys, I encounter my father.

Similarly, the allure of the Peoples Temple Collection at the California Historical Society goes beyond the documents’ use as objects of analysis. When one encounters the archive, one encounters the people responsible for the texts contained within it. In the foreword to Dear People: Remembering Jonestown, an edited collection of selections from the collection, Executive Director Stephen Becker acknowledges that “rare is the moment when an archival collection literally knocks the breath right out of you . . . Merely knowing that this archive exists is fascinating; standing in front of the remaining record of such a compelling story can be numbing and sad; opening the boxes, we find the people of Peoples Temple – the faces of Jonestown” (viiii).

Working with the archive can be overwhelming, a feeling captured by historian Carolyn Steadman in Dust: The Archive and Cultural History. She writes:

What keeps you awake . . . is actually the archive, and its myriads of the dead, who all day long, have pressed their concerns upon you. You think: these people have left me the lot: each washboard and doormat purchased; saucepans, soup tureens, mirrors, newspapers, ounces of cinnamon and dozens of lemons, each ha’penny handed to a poor child, the minute agreement about how long it shall take a servant to get to keep the greatcoat you provide him with at the hiring; clothes pegs, fat hog meat, the exact expenditure on spirits in a year; the price of papering a room, as you turn, in the spring of 1802, from tenant farmer with limewashed walls, into a gentleman with a gentleman’s residence. Not a purchase made, not a thing acquired that is not noted and recorded. You think: I could get to hate these people; and then: I can never do these people justice; and finally: I shall never get it done (17-18).

Steadman’s depiction captures the intensity of working with the Peoples Temple archive. At its most basic level, the archive is a physical manifestation of the immense amount of financial, emotional, and intellectual labor that was harnessed in the service of Peoples Temple’s work by its members. But on another level, it is an extension of the members themselves. When we work with the texts in the archive, we encounter Peoples Temple members. Thus something else gnaws at the edges of our attention, which is the fact that this archive is intrinsically valuable. That is, its value does not rest on what it can “tell us” about Peoples Temple, but rather on its status as an extension of– a part of– the people whose work it mediated.

Shearer, H. (2010). The Textual Practices of Peoples Temple: How Did Texts Help to Build the Promised Land? Alternative considerations of Jonestown & Peoples Temple.