In what has become a regular feature of the jonestown report, the following is the 2021 review of podcasts dealing with Jim Jones and Peoples Temple. This edition covers podcasts from Paranoid Planet, Vice Extremes, Silent Command, The Worldview Clash Class, BBC Heart & Soul, and Transmissions from Jonestown. Reviews from previous years can be found for 2020, 2018, and 2017. To learn more about podcasts in general, I refer you to a primer written in 2017.

This year’s podcasts run from standard interviews to deeply experimental audio diaries. The good news is that none of these podcasts need to shamed. They all offer something positive for listeners. Be warned that some of these podcasts were aiming for longest podcast episode ever.

And now, in no particular order.

If you like to hear the views of this website’s editor, Fielding McGehee, you’re in for a treat. Two of these three episodes constitute four hours of Fielding. It’s a lot to take in, but there are some noteworthy moments. In the first episode, prior to the interview itself, the host reads an impressive essay that touches on a multitude of topics: Russia’s Church of the Last Testament whose beliefs and practices are similar to Jim Jones and Peoples Temple, a history of the Stanford Prison experiment and, discussions on how group dynamics, paranoia, and conspiracy thinking can lead to people in power abusing people with no power. In episode two, after selections from the Peoples Temple album, He’s Able are played, there is a serious debate about usage of the words “cult” and “brainwashing”. (The host persisted in using those terms in episode three, so I guess he wasn’t convinced by Fielding’s arguments.) The other notable discussion here is of a handful of conspiracy theories, most of which are analyzed and dismissed due to lack of evidence. There was one conspiracy – that Jonestown was a big marijuana farm which had to be destroyed, as well as the people on it – that Fielding had never heard of.

Episode three is more shambolic. The hosts posit that people who believe they are victims of conspiracies will often spin their own conspiracies. For example, Jim Jones’ personal nurse, Annie Moore certainly believed that government agencies such as the CIA, FBI, and IRS, were trying to destroy Peoples Temple, but in Jonestown, she believed in a conspiracy to poison Jim’s milkshakes. Other examples are provided, including some from the host’s own life experience in Kennedy conspiracies circles.

This is a 45-minute interview with Vernon Gosney, and I think it’s the best I found this year (even though it was aired in 2020) simply because of Gosney. He talks about his childhood, his wife’s death, and the events of November 18 in a way that is touching but never maudlin. As an example: Gosney was severely wounded at the Port Kaituma airstrip and hospitalized for several weeks. When his father, uncles, and brothers finally came for his release, they were armed. After all, they had heard the feverish speculation of post-November 18 “hit squads.” The story is both is funny and heartfelt.

I have always admired Gosney’s ability to sum things up, and he does it here again. Towards the end, when asked about red flags he saw before Jonestown, he discusses how he convinced himself to stay in Peoples Temple by comparing it to falling madly in love and making excuses for someone’s behavior because you’re still holding on to that beautiful dream of the relationship. “In groups like this,” he says, “they take what is acceptable to a certain line, and they move it just a little bit, and then they move it a little bit.” Gosney was a gifted, insightful storyteller, and I will miss hearing from him in documentaries and other projects. Mahalo nui loa.

This was truly inventive. Mike Applestein created an audio diary to tell the story of Peoples Temple using only the archive of recovered tapes and one outside source. Sermons, interviews, phone calls, recorded broadcasts, selections from He’s Able, and other snippets are woven together; it is not just a collection of “crazy Jim” moments. The sound quality varies because of the sources used here, and there are gaps because of the lack of recorded materials before 1966, but don’t let that stop you. There are intimidating phone calls made by Temple spokesman Mike Prokes. Another features an anonymous caller attacking Lester Kinsolving. Dr. Larry Schacht shows up in one of the White Night rehearsal tapes. Perhaps the most poignant one is a sad call between a mother and daughter whose relationship has clearly fractured because of Peoples Temple.

The best segment includes selections from the death tape interspersed with recordings from shortwave radio calls being made to the Embassy in Georgetown. You hear Jones talking about how someone on the plane is going to shoot the pilot, then you get a recording that there might have been a shooting at the airstrip. You hear Jones talking about laying down our lives, then a recorded phone call of embassy personnell trying to figure out who Mr. Frazier is and what it means that the children are going to see him. It’s chilling.

The podcaster’s discussion of the program and his listing of sources appears here. 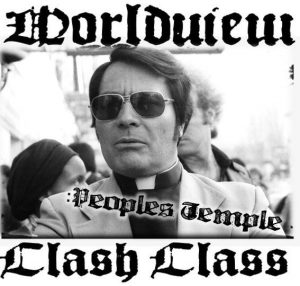 “In this series, we look at the Peoples Temple Movement from a biblical Worldview…” Those words made me excited: finally, a podcast that will systematically go through Jones’ theological beliefs about God, Jesus, the Holy Spirit, sin, salvation, etc. and then refute or confirm using Scripture. And it started out that way. Jason Burger’s first episode analyzes Jones’ preaching skills, that he preached with Scripture, with authority, and about the issues of the day. It concludes that Peoples Temple was distinct from other groups and movements.

Similarly, the second episode with Fielding discusses how Jones twisted Scripture and denigrated the Bible while simultaneously using it to support and lift himself over the members.

The remaining episodes never really kept up. Two interviews with Hue Fortson and with David Parker Wise – both former associate pastors of the Temple – and another episode that attempted to provide a visit to a Peoples Temple meeting with lots of audio clips, were interesting and informative, but I couldn’t see how they tied to a biblical analysis of Jones or Peoples Temple. The last episode does examine some of Jones’ claims and refute them, but it feels like an afterthought.

Originally broadcast on BBC World Service, this two-part program explores “intimate questions of faith and spirituality” from around the world. Most of the other episodes I looked at in this series seem to explore current events, so I am not sure why they covered a 42-year-old event, other than maybe because the problem of messianic leaders is always ongoing? It’s never discussed how this fits into today’s world.

BBC reporter Erin Martin brings a unique perspective, in that she was born in to and spent several years in COBU (Church of Bible Understanding), a group that is very similar to Peoples Temple. She does inject thoughts about the similarity between the experiences of people in the Temple and what she went through.

One thing that did bother me is that, in this program she states that she finds the word “cult” is not helpful, but she used it as the title of her own show in 2018-2019, Cult Talk with Erin Martin which focused on the experiences of other COBU survivors. Maybe she feels comfortable using the label for her own experience but does not push it onto others? Thankfully, she does spent time here demonstrating, with quotes, that people do not join a cult. They join a family or an organization whose goals they believe in.

The basic Peoples Temple story is presented along with warning signs that Martin points out along the way. These warning signs are paired with segments of interviews with Tim Carter, Leslie Wagner-Wilson, Jordan Vilchez, Stephan Jones, Vera Washington, and Fielding McGehee, as well as old recordings from the Peoples Temple archives.

These are not new points, other people have made them, but Martin does do so succinctly and in a progressive point-by-point manner. To me as an educator, it felt like a well-written research paper in an audio format and I found it appealing.

Transmissions from Jonestown-Episodes 13-21 (November 2020 – August 2021)
Building on her first full season from 2017, Shannon Howard returned with nine full length episodes this year on a wide range of topics, including:

The archived tapes still play a huge role, but significant, and lengthy, portions of interviews have been added to help flesh out the behind-the-scenes aspects.

What I like about this podcast is that Howard builds on her previous work rather than going over the same ground that she did in Season 1. She finds genuinely curious things to add, one being a TV interview with Jones done when he adopted Korean orphans in 1959. I often have to write down notes so I can read up later topics she brings up. While the Reverend William W. Branham gets two pages in Raven, Howard just deep dives on this guy and his influence on Jones. My only complaint this time around is about length of a couple of episodes, but seeing as how they are thematic, it’s hard to point out how they could be cut.

There is one final series, Escape from Jonestown, available through Amazon’s Audible podcast service. The six-part podcast focuses on the experiences of Jonestown survivor Tim Carter. It was not reviewed, because – unlike the others – it is not free, unless you already have an Audible account. If you already have an Amazon account, you can subscribe for a 30-day free trial. Just remember to cancel before they begin to charge you.

(Jason Dikes holds a degree in broadcast communications from Stephen F. Austin State University, an MA in history from the aforementioned institution, and an MLS from The University of North Texas. He currently is an adjunct professor American history at Austin Community College and a cataloging librarian for the City of Round Rock. His complete collection of articles for this site may be found here. He may be reached at jdikes@austincc.edu.)