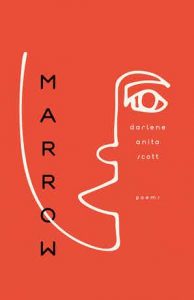 The amazing poems of darlene anita scott in her new book Marrow capture the essence of those who lived and died in Jonestown. scott uses diaries, photographs, letters, and tapes, along with her own prodigious imagination, to create stories, and worlds, that transcend the gory headlines. By humanizing the members of Peoples Temple, she reminds us of all that was lost on a single day in November 1978.

“A true account of the actual is the rarest poetry,” wrote Henry David Thoreau in a remark that aptly describes scott’s poems. Her poems are true, or truthful, depictions of the quotidian lives of ordinary Temple members, as she follows their steps from Indiana to California to Guyana.

scott dates her poems to lend verisimilitude to an account that is far from literal. For example, the poem titled “The Peoples Temple Agricultural Project” is dated 23 July 1974. Those familiar with the history of Jonestown know that 1974 marked the beginning of development, with trees being felled and land being cleared. The eight short lines of the poem signify what a labor it was:

Earth is a mama
who plies patience
unafraid of denying.
Trains her wisdom
on the devil of details.
Her tipping point
is shifty weight,
liquid volume.

In vivid metaphor, another poem details the difficulties in carving a village out of a jungle —“Composting, 30 July 1977.” “The soil did not swaddle,” it begins. But the poem ends on a note of confident expectation:

So we saturated it
with accelerants like wonder
& hunger.  Warmed it with
our hopeful & certain bodies.

Introductory notes provide the historical context for understanding the poems. This is important, since most readers are likely to have been born after 1978. Because their knowledge of Peoples Temple is limited to the “Jonestown massacre,” they will gain more than aesthetic enjoyment from scott’s poems; they will also acquire appreciation for the humanity of the people who made up the Temple.

There are too many memorable lines to do justice to the lyricism of scott’s poetry. But I cannot resist providing at least two here. First:

God is a chance we take.

Sanding is spiritual work.
Hands, the main organ
by which to manipulate
the environment, polish. 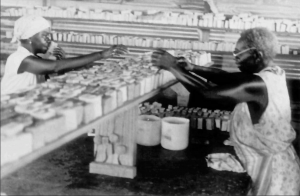 It is clear that scott read widely from numerous sources to enlarge her own understanding of Peoples Temple. Her poem “Making Soap, 13 August 1977,” brings to life the photographs of older African American women laboring to make soap for the community. “For Yonder, Summer 1977,” presents a list of items a teenager plans to take for the emigration into Guyana. 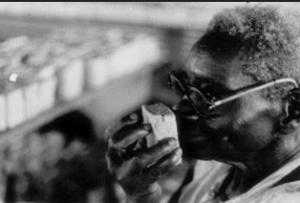 Some of the items come directly from packing lists used by members making the move (including “Clothing List for Yonder” and “Supply Lists, February 1978”.)

The poet complicates popular conceptions of Jonestown by juxtaposing the horror against its nobility. scott sees not only the tragedy, but also the richness, fruitfulness, and depth of human experience evident there—and everywhere, for that matter. In other words, she gets at the marrow of her subject. This is what makes darlene anita scott’s book a landmark in the literature of Jonestown.

(Editor’s note: Rebecca Moore is Professor Emerita of Religious Studies at San Diego State University, and has written and published extensively on Peoples Temple and Jonestown. Rebecca is also the co-manager of this website. Her other articles in this edition of the jonestown report are Dr. Hardat Sukhdeo: The Man Who Knew Too Little, Godwin’s Law and Jones’ Corollary, and The Cult of Jim Jones. She is also the author of remembrances for longtime Temple scholar Mary Sawyer and for clinical professor of psychology Chris Hatcher. Her full collection of articles on this site may be found here. She may be reached at remoore@sdsu.edu.)