(Joel X. Thomas has been a lifelong musician, performer, and recording artist. He is also a regular contributor to the jonestown report. His other investigative articles in this edition are The Jonestown Express, November 17, 1978: Life on the Eve of Tragedy, The Infrastructure of Jonestown’s Recording and Speaker Systems: A Photographic Overview, and Mystery of Q042 Death Tape Unspooled. He is also the author of The Most Recent Jonestown Book Cannot Be the Last. His complete collection of articles for this site is here. He can be reached at joelxthomas@hotmail.com.) 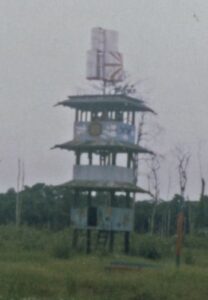 Visions of Jim Jones wearing a beret and dark sunglasses come to mind, as he breathlessly reads the current news into his sports broadcaster-style microphone. Perched high above inside a watchtower overlooking the community, he warns his people about an upcoming attack from outsiders and their impending doom.

This was the image that came to mind when I first caught a glimpse of the Jonestown “Radio Tower,” reminiscent of the standard POW camp-type communications tower found throughout history, with its spinning transmitter and radar receiver tracking dish on top, constantly scanning the skies for any type of invasion from outside and unseen forces. 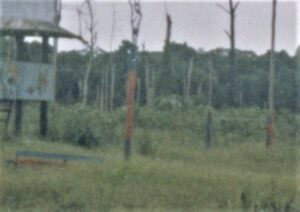 The “Radio Tower” stood 40 feet tall at the southeastern most part of the camp, located by the last row of family cottages. Its three tier, four pole construction resembles that of an elaborate tree house, each level accessible with a ladder on the inside. On top, a mesmerizing “air scoop” contoured device spins freely in the wind. Beside the tower is a small children’s playground painted to match the main playground that sits across the main road (Jonestown Lane) from the Dining Tent.

Several of the audiotapes recovered from Jonestown let us know what the tower actually was, and how sensitive Jones was to its resemblance to a guard tower at a prison camp. The subject comes up as he coaches his followers about what to say if any outsiders ask about it.

In Q 049-1, an undated tape during which Jones guides community residents about how they would answer various questions from a reporter, he has this exchange with an unidentified man:

Jones: And what would you say about that big thing out there on the field. What is that?

Unidentified man: Um, I don’t know what you’re talking about.

Jones: Well, that thing stands up in the air there.

Unidentified man 8: Oh, that’s a playground for our children. We’re gonna put slides and everything on there so they can play, have a place to play. And also it’s a place for the hot season where we can watch for fires.

Jones: And you call a pagoda. Yes, you mean a pagoda? That’s a good point, but somebody gonna sure as hell say it’s a tower, but call it a pagoda. You understand? They’ll have it a potato, I’m telling you. Act like you know what you mean. You mean that thing back over there? You understand what I mean? It’s a pagoda, if you talk about it. Say, they’re making slides for children to play from there. And if we have dry spells, we can look around and spot any kind of fires that might be breaking out. Makes very reasonable sense. Do you hear? Say, [“There’s] nobody in it now,” and there isn’t. Right now. Don’t underestimate our capability of knowing for what people, if they’re trying to harm you.

In Q 279, another tape recorded later that month, Jones once again takes on the role of a reporter as he coaches Jonestown residents what to call the tower, and what to say that it is used for:

Jones: (Reporter tone) You got a tower out there. What is that tower– That tower is clearly– Uh, I see a tower over there. What’s it for?

Unidentified Female: Uh, the tower is used for a playground for our children and it’s going to be–

Unidentified Female: It’s just going to be for a fire watch.

Unidentified Female: Well, they break out occasionally, we just, you know–

Jones: (Conversational tone) You cannot be intimidated by me, honey. I’m telling you, you guys must not be intimidated. The thing you should’ve said, well, we’re building slides out from that tower, and it’s a pagoda. You’re a college graduate, laboratory technician. You’ll have to work on getting more poise, ’cause you’re very bright. They said, you’re the best laboratory person, so let me see. That’s the best thing I’d say then. Say, the pagoda? You’re talking about the pagoda? If you can’t say the pagoda, say, you mean that building out there? That’s a playground. I wouldn’t all immediately respond “the tower.” Know what they’re saying. I said five times I’d throwed the tower at you. You just backed off, and you got afraid. The best thing to say well, uh, it’s a playground. Why, of course, it’s a playground. Go out there and see, they’ve made designs for the children and they’re building slides.

So, although Jones feared that some of the members might call it “The Potato,” the official Jonestown name for the tower is “The Pagoda.” It was to be referenced to outsiders as being a playground for children and – perhaps slightly more credible – a lookout tower for fires.

But its location would dictate otherwise. Why have a tower so near to the family cottages, and so far away from the central area – and more to the point, the kitchen – which would be more vulnerable? Wouldn’t a centrally-located fire watch tower with a 360º view of the entire camp be preferable to one between the last row of cottages and the endless jungle?

If the Pagoda is not a children’s playground or a lookout for fires, could it in fact have been the “Radio Tower,” as it is so often labeled? All the evidence suggests it was not. First of all, there is literally no need to have a structure built so far from Jonestown’s center to serve as a radio tower. Moreover, no power cables of any kind are attached to the Pagoda, only a system of stabilization cables attached to anchor the structure to the ground.

Instead, Jones broadcast his messages to the community from two other locations: the radio room and his own cottage. There were two antennae near the Radio Room and Dispatch Office used to transmit his broadcasts. These two antennae were also responsible for creating the radio interference picked up by the P.A. system in the pavilion that plagued the recording of many of the Jonestown tapes.

As for the rotating beacon that resides on top, it was attached last. 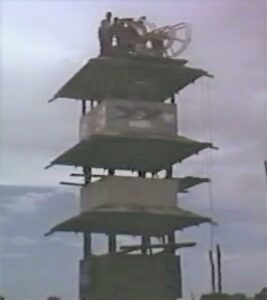 Its construction is mostly of wood wrapped in a thin metal material. 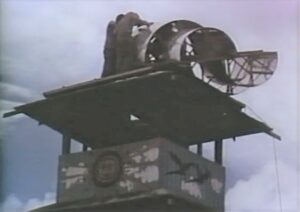 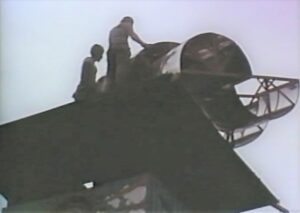 There is no clear advantage to having a spinning antenna to transmit or receive signals. In fact, this would defeat the purpose if it was used for radio. The illusion is given that since there is motion, there must be something high-tech going on. like a radar dish on top of an air traffic control tower at an airport. The main problem with that conclusion is that, not only is radar completely different than radio, there was no need for anyone in Jonestown to use radar tracking for anything. 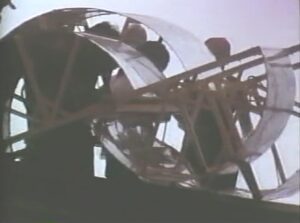 Ironically, the one and only time the Pagoda was ever used as any form of a “Radio Tower” was after November 18, 1978, when USAF Sgt. David Netterville and Tech Sgt. Wayne Dalton used military issued portable radios to direct helicopters flying in and out of Jonestown during the evacuation of the bodies from Jonestown. 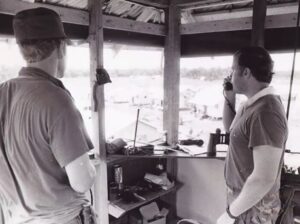 From there, the remains were transferred to airstrips at Port Kaituma and Matthews Ridge, transferred to fixed wing aircraft, and then flown to Georgetown and on to Dover Air Force Base in Delaware.

Two other possible uses of the tower have been suggested – as a windmill to irrigate crops, or as a device to generate electricity – but neither stands up to examination. Since the upper beacon is free spinning, and the tower itself lacks a central driveshaft to turn a pump, it cannot be a windmill. In addition, since there is no substation with power cells or capacitors to be charged, or power cables of any kind, it cannot be a generator. In fact, Jonestown was powered by diesel-fueled generators.

Where, then, does that leave us as to its purpose? 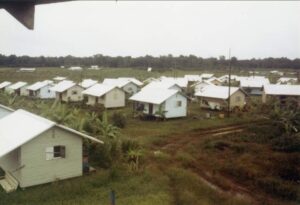 The views from the top of the tower are the clearest indication of its intended motive. Looking to the left while facing the camp (Northwest), we see a clear shot of all the family cottages. 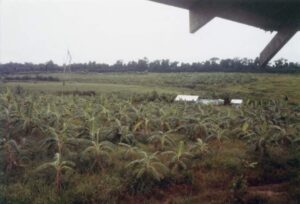 Looking to the right (Northeast), we can see the “East House” cottage, Jones’ initial residence, with surrounding picket fence in the distance. (Jones later moved to the “West House,” a new cottage built on the opposite side of the camp, and the “East House” became a guest house). 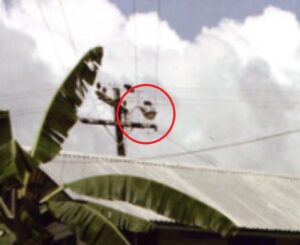 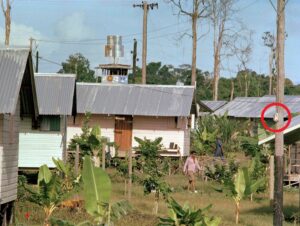 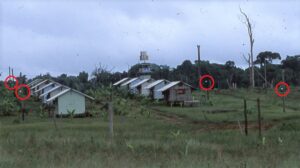 From this view, then, tower guards have a perfect line-of-sight of the family cottages and Jones’ cottage. Security lights attached to the utility poles lit up the entire perimeter of the area, making an escape during the night – or an attack on Jones’ cabin – impossible.

In the end, then, my first impression of its use – as a standard POW camp-type communications tower – wasn’t completely wrong. More likely, it was a POW camp-type guard tower, something Jones would never admit to or want the community to consider it as. However, as differentiated from a POW tower, the guards inside weren’t there to deter or prevent escapes, but rather to protect him, to prevent any assassination attempts that, in his paranoia, he was certain were in the works. His move from the East House to the West House – unannounced at the time, unknown to many survivors until years after the death – was further reflection of that paranoia: even though he didn’t need the guard tower anymore, he left it intact, letting people think he was still out there.

In the end, he was being guarded from the dangers within, not from the community itself, but from within himself.